The title "Man of Steel" tells you what you're in for: a radical break from the past. The absence of the word "Superman" leads us to expect a top-to-bottom re-imagining, and that's what the film delivers, for better and worse. This is a 2013 version of the story: dark, convoluted and violent, chock full of 9/11-styled images of collapsing skyscrapers and dust-choked disaster survivors. It's sincere but not particularly funny or sweet. The hero is a glum hunk, defending a planet so scared of apocalyptic conspiracy that it assumes anyone who presents himself as good guy must have ulterior motives. Steel is what you need to have in your spine if you're going to be super in this world.

Directed by Zack Snyder ("Watchmen," "Sucker Punch") and overseen by Christopher Nolan (the Dark Knight trilogy, "Inception"), "Man of Steel" largely abandons the sunny spirit and kooky humor of the Christopher Reeve-starred films, as well as Bryan Singer's homage to them, 2006's "Superman Returns." It brings the character in line with the recent craze for brutal, morose tales of loners defending a world that doesn't appreciate their sacrifices. This time the big guy's suit isn't Dick Tracy red, blue and yellow; it's a muted ensemble of synthetic chain mail that's described as "battle armor" rather than as a uniform or costume, and Supes wears his underwear on the inside, thank you very much. Scene-for-scene, this is a first-rate example of a Hollywood fantasy released in the early 21st century: a new-car-smell summer blockbuster. It has wobbly handheld camerawork signifying "authenticity," a glum color palette, skyline-shattering super-fights, hardware whose designs crib from "Alien," "Dune", "Independence Day" and Spielberg's "War of the Worlds," and a detailed mythology that can plug into an expansive, Marvel-style "universe." When humor bubbles up, welcome though it is, it feels like a tonal lapse.

"Man of Steel" also breaks with past "Superman" films in how it tells its story. The script, which is credited to David S. Goyer of the "Blade" films, starts with a prologue on Krypton, envisioned here as a John Carter-style land of towering hyper-structures, "Matrix"-looking hovercraft, and winged beasts. Superman's dad Jor-El (Russell Crowe) and mother Lara (Ayelet Zurer)are fighting two battles at once: to convince the planet's government that its environmental recklessness is causing the planet's core to melt, and to contain a rebellion led by General Zod (Michael Shannon), who's outraged that Jor-El dared to violate Krypton's biological breeding protocol and conceive a son the old-fashioned way. Zod and his followers are exiled to the Phantom Zone in ships that look mortifyingly like the hero's spacecraft in the 1970s porn spoof "Flesh Gordon" (the film's design is a riot of phallic and vaginal imagery, as most post-"Alien" sci-fi films are). Krypton explodes. Kal-El zips off to earth and is raised by Ma and Pa Kent (Diane Lane and Kevin Costner), in idyllic prairie surroundings that call for an Aaron Copland score (though Hans Zimmer does just fine). After the New Testament timespan of 33 years, we pick up Kal-El/Clark's story in time for him to unlock the destiny that his adoptive parents kept secret. Their motives were good: they predicted the hostility he would encounter once he put on his tights — sorry, "armor"! — to fight Zod and prevent Earth from being flattened to make a new Krypton. (Zod's plot to create a resurrected Krypton echoes "Superman Returns," though given that film's poor reception, I'm sure the filmmakers would rather nobody pointed them out.)

As the adult Clark/Superman, Henry Cavill's not bad; in fact he's quite likable, and spectacularly handsome, natch. But there's no Reeve-like radiant comfort in his acting, because the character as imagined here is even more of a blank screen for our projections than most movie superheroes. Like Christopher Nolan's Batman pictures, the Goyer-scripted "Man of Steel" reveals key moments in the hero's development through flashbacks triggered by present-day traumas; a few parts almost seem to be unfolding along simultaneous timelines, the past and the present. This is not just defensible but appropriate, considering that so much of the story is about having to function day-to-day while carrying around the crushing weight of your own past, as well that of an extinct motherworld you never got to know.

The most striking scenes show young Superman struggling to make sense of powers he can't display, for fear of being labeled a freak or a monster. One early sequence shows young Clark zoning out during a school lesson because he's overwhelmed by the data Hoovered into his brain by his super-senses. When he looks at his classmates and teachers, he sees their bones and veins and organs through their skin, and because he hasn't mastered the art of filtering sound, he hears a cacophony of voices in his ears, like the burbling of a crowd at a ball game. There's a touch of "The Incredibles" in the scenes of Jonathan Kent explaining why Clark can't reveal the full extent of his specialness. Costner is superb in these moments, projecting an unforced, Old Movie-style decency that may remind fans of his performance in "Field of Dreams." (It's as if Ray Kinsella, the adult son in "Dreams", has become the father in this one — an icon of kindness, yet sad-eyed and mysterious; "worn down by life," as Ray described his own pop.) When Clark, who's passed the years on a fishing boat while rocking a "Perfect Storm" beard, heads north and gets his own pad, the Fortress of Solitude, he acquires a second father, his biological daddy Jor-El. Supes the elder becomes a present-tense Obi-Wan, advising and arguing with Clark (and later, Zod!).

This is all good stuff — though it was done less ostentatiously in the TV series "Smallville" — but it's all a setup for the film's second half, which juxtaposes Clark's transformation into Superman with Zod's return to earth on a mission of vengeance and world-building.  It's here that the film loses something. It's not that what's onscreen isn't involving: for the most part it's splendidly realized, even though the muted color palette, shaky camerawork and secondhand design concepts won't win prizes for originality. I like how the filmmakers link Superman's embrace of the destiny his adoptive father hoped he'd resist and Zod assuming the mantle of visionary warrior-leader that Jor-El denied him on Krypton. The notion that politics is personal gets a workout. Zod isn't as amusingly effete in "Man of Steel" as he was in "Superman II", but he's not without humor, some of it inadvertent. Shannon, an expert in projecting self-defeating macho rage, makes Zod less of a straightforward evildoer than a tragically misguided antihero. There are times when his rivalry with Clark/Superman recalls the tension between Hawkeye and Magua in Michael Mann's "The Last of the Mohicans," in that the villain is only a villain if you're looking at him through the eyes of the people he's steamrolling. You don't condone Zod's actions, but you understand his motivations. In his twisted way, he's trying to preserve and continue the legacy of a vanished world. Something in Cavill's beefy Boy Scout performance suggests that Superman gets this — that he understands Zod even though he knows he has to destroy him. The hero's struggle not to give into rage and pettiness when facing bullies like Zod—to use his power to heal and save rather than destroy—is explored with more finesse than you might expect.

No, the film's most curious and unfortunate aspect—its Achilles' heel, really—is the way it minimizes or shuts out women. You can see this tendency in the way "Man of Steel" handles Lois Lane (Amy Adams). She's portrayed as a capable reporter, more so than in previous films, but I didn't detect much chemistry between her and Clark, even when you factor in the ungodly pressure they're both under. While Clark is dealing with his demons and the world's, she's uncovering a government conspiracy to hide evidence of a buried Kryptonian spacecraft, then struggling against her Daily Planet editor Perry White (Laurence Fishburne) for the right to publish a story she feels is true but can't prove. There are flirtatious moments between Lois and Clark, but they're few and far between, and I'm not convinced that the apocalyptic events surrounding the couple are the only reason.

This is a butch Superman film, driven by machismo. Lois is an important character, but only for how she furthers Clark/Superman's attempts to understand himself and claim his destiny. She's less of a fully-realized human being than the kooky narcissist played by Margot Kidder in the Reeve films, or Kate Bosworth's Lois in "Superman Returns," a melancholy figure defined by her ability to move on after the hero's sudden departure from earth. Adams' Lois is tough and smart, but she has no personality, only drive, and she's not as integral to the action as she seems to be on first glance. It's telling that this movie gives equal weight to the story of a distrustful general (Chris Meloni) whose relationship with Superman lets him become the stand-in for a doubting Earth, a role filled by Lois in the 1978 film. Ma Kent is endearing, but she's not as powerful a presence as the doomed Jonathan. The hero's birth mother vanishes after the prologue, her absence explained in a throwaway line that Crowe seems embarrassed to have to deliver. The uncharitable might notice than when a stupid question has to be asked, or a trivial remark made, it's often delivered by one of a handful of women in a room full of burly guys; they may also note that while every significant male figure in "Man of Steel" is given an option to be physically brave under horrible circumstances — even grey-haired Pa Kent and Perry White have their moments — females exist, for the most part, to be saved, or to have things explained to them.

Considering that every previous "Superman" movie put the courtship dance between men and women at the heart of its action — particularly "Superman: the Movie", "Superman II" and "Superman Returns" — the fact that "Man of Steel" has a No Girls Allowed sensibility seems like a deliberate creative choice. It's as if the filmmakers want to reassure young male viewers accustomed to the glib swagger of "Iron Man" and the dire self-pity of Nolan's Batman trilogy that Superman is in the same wheelhouse. (Zod's right-hand woman Fajora-Ul, Antje Traue, is a powerful presence, but she's even more desexualized than Lois; her character's main trait is a pathological hatred of men.)

Again, this is all state-of-the-art, very much in line with the way superhero movies are done now. And yet this aspect of the "modernization" feels retro, because it comes at the expense of an under-acknowledged part of Superman's appeal: virtually alone among big-name superheroes, he's a romantically and sexually mature man who seems to like and be comfortable around women. If you're wondering why I could say so many positive things but and only give the movie three stars, the preceding two paragraphs are your answer. Viewers who predicted that Warner Bros. and DC Comics were trying to turn Superman into The Dark Knight were right, sort of. "Man of Steel" is in many ways an astonishing movie, but it won't do anything to quell complaints that the big-budget superhero genre is basically adolescent, that its creative development has been arrested for decades and might not budge anytime soon. 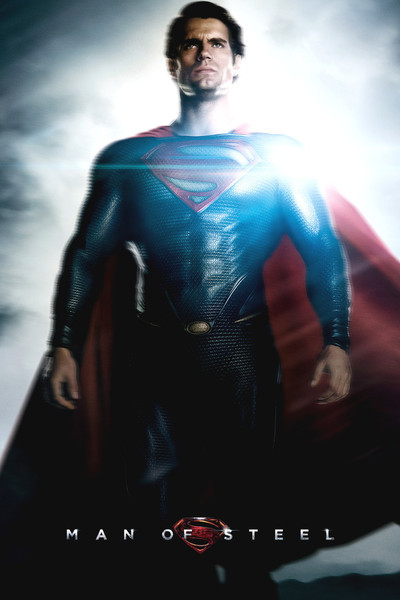