Shane Black, who made his bones writing "Lethal Weapon," "The Last Boy Scout" and other crash-and-burn action films, was the perfect person to take on "Iron Man 3," and not just because he worked with the franchise's star Robert Downey Jr. on 2005's "Kiss Kiss, Bang Bang." The new film's not great, but it's consistently involving because the tonal shifts are so abrupt. One minute it seems to care a great deal about what's happening, the next it's sneering at the notion that anyone could care about anything that happens in a movie.

For a franchise on the brink of fatigue, this attitude seems just about right — especially considering that all of the Iron Man movies are more self-aware comedies than dramas, with overlapping, often improvised-sounding dialogue and winks at the audience which suggest that the filmmakers are fans of Bob Hope and Bing Crosby's affable Road series. This is the kind of film in which the hero can swear revenge against the villain for injuring his friend, then a few scenes later earn big laughs from the sight of Tony Stark in Iron Man regalia tottering down narrow stone steps like a drunk drag queen in nosebleed heels. "A girl and a couple of lame quips, that's all you got?" a female assassin taunts Tony. "Sweetheart," he replies, "that's the title of my autobiography."

Of course "Iron Man 3," which pits Tony aganst an Osama bin Laden-style terrorist-guru known as the Mandarin (Ben Kingsley), is a lot more brutal than the old Hope-Crosby pictures. In fact, its violence stretches the PG-13 rating to the breaking point, with lethal (if mostly bloodless) gunplay, and moments of wanton cruelty that would be jarring if the film weren't a cartoon fantasy in which pain and the laws of physics are largely theoretical. (As in his other screen appearances, Tony survives high falls and supernatural body-blows that would pulp a real person, but it's all of a piece with the film's dream logic.)

The story reunites most of the recurring cast, including Gwyneth Paltrow's Pepper Potts (CEO of Stark Enterprises, and Tony's girlfriend), Don Cheadle's "Rhodey" Rhodes, aka War Machine (re-christened Iron Patriot, and enlisted in the ongoing War on Terror) and Jon Favreau's Happy Hogan, who's still guarding his quipster boss with big brotherly devotion. There are new gadgets, including a segmented "prehensile" Iron Man suit whose pieces are controlled via a receptor implanted in Tony's body and fly through the air, locking onto his arms and torso part-by-part. There's a love triangle — more of a tension triangle — involving Tony, Pepper and a supposed botanist named Maya Hansen (Rebecca Hall).

And there's a mystery — or perhaps I should say "mystery," since any sentient moviegoer will be able to guess how all the pieces lock together: Who is the Mandarin? What does he have to do with the dashing, charismatic entrepreneur-scientist Aldrich Killian (Guy Pearce), who wants to sell Stark Industries a metabolizing substance called Extremis, which can create new limbs and heal sick bodies, but has certain, er, side effects? How does Maya fit into all of this? Can the combined forces of the U.S. military and Stark Industries stop the Mandarin from bombing us into oblivion? Barring that, can they at least prevent him from simultaneously interrupting every broadcast in North America with his sermons on the moral failures of military-industrial capitalism? (His sentiments are warmed-over Noam Chomsky, but they're brilliantly edited, with flash-cuts of terrorists training and stuff blowing up. Unlike bin Laden, the Mandarin knows it's not enough to stand in front of a camera and rant; the images need to sizzle, baby!)

Tony's adversaries are visually fresh, even though, with two notable exceptions, Black and his cowriter Drew Pearce haven't given them characters to play. They pass as regular people but can morph and re-form like the T-1000 in "Terminator 2," their core substance looks more like molten lava than molten steel and their eyes glow a hellish crimson. During a fight with former Army-colonel-turned-Mandarin-henchman Eric Savin (James Badge Dale, chewing gum a lot) Tony mocks the bald, red-eyed assassin by calling him "Westworld."

Downey is as anti-sentimental and hilarious as ever — he's basically young Bob Hope with biceps -- but from certain angles he looks like a pumped-up Kevin Smith, and I found this distracting and eerie. As his best pal and partner in biomechanical heroics, Cheadle has an easygoing authority and matches Downey quip-for-quip and gunshot-for-gunshot, like last time. He could carry his own comic book picture easily, but if it were as inconsequential as most Marvel projects, I'm not convinced that would be a great use of his talents. Paltrow is tough and endearing when she's onscreen, which isn't often enough.

As the Osama bin Laden-esque villain the Mandarin, Ben Kingsley steals the movie, and I wish I could say precisely how without spoiling a wonderful surprise. Guy Pearce's torso, showcased shirtless in a fight scene, steals the movie right back. He must have spent six hours a day at the gym for months to look that ripped; you could grate lettuce on his abs. The compositions and editing are industry-standard, mostly loose and chaotic, and if you see the movie in 3D (actually post-converted 3D), you might have trouble telling exactly what's going on during the darker scenes, because the glasses dim the image so much.

A couple of days after seeing the film, I can't recall a single beautiful or even memorable shot, though there's a skydiving action sequence two-thirds of the way through that's one of the greatest airborne setpieces in movie history. Given the amiable glop that surrounds it, I can't imagine how it found its way into the movie, though; most of the action isn't so much directed as covered, and its themes are articulated with about as much care. "Iron Man 3" builds on the first film's political cynicism by suggesting that politicians and arms dealers dream up foreign policy crises to consolidate power and make money, but it doesn't develop this notion in detail, because if it did, the audience would tune out. As in most comic book blockbusters, both the heroism and villainy are personal, good apples vs. bad apples, and the story's latent pacifism is eclipsed by the joy that Black takes in blowing things up and gunning people down.

Hollywood alpha-male sleaze was an undercurrent in the first two films, manifesting itself through hot cars, glittering parties, and strip-club style booty shaking; "Iron Man 3" puts those same tendencies in the spotlight. Black's grinning machismo is a bro steroid, making creative muscles that were already well-defined balloon to grotesque proportions. This movie is the "Entourage" fantasy of Iron Man. Whenever a character barges into another character's bedroom, you're faintly surprised when there are only two people in the bed. One major character has a serious drug habit and the bad guys' relationship with Extremis has overtones of addiction as well.

Tony and Rhodey dominate the action and own the story; Pepper spends long stretches of the picture pinned inside what looks like a defective Nautilus machine, but at least she gets to banter with Tony first. Maya doesn't get to do much besides express remorse over her, um, connection to the mayhem, though she does have an unexpectedly touching conversation with Pepper that's filled with regret over bad roads she's taken. When Tony Stark's cliffside home is destroyed in a chopper attack — a moment prominently showcased in trailers — the audience gasps as if the film had shown a maniac slashing the Mona Lisa, and within this film's value framework, it does seem an obscenity. It's the greatest swinging bachelor pad ever put on film.  At long last, Mandarin, have you no decency?

From his breakthrough as a screenwriter in "Lethal Weapon" to his directorial debut with 2005's "Kiss Kiss, Bang Bang," Black has carved out a niche as a borderline parodist of crash-and-burn action, serving up moldy macho clichés while making fun of himself (and the audience) for loving them so much. The prototypical Shane Black hero shambles around presenting himself as a soul-dead cynic who's tired of the same old same old, but within an hour or so, he's rescuing people, swearing vengeance against evildoers, and sailing through the air unloading handguns. His stories straddle the midpoint of of the kidding/not kidding scale like a little kid standing atop a seesaw on the playground, shifting his weight around to make the opposing ends rise or fall.

Along the way, Black sprinkles self-aware jokes about the rules and traditions of the genre as if he's Bertolt Brecht's meathead kid brother. Even his screenplays treat commercial screenwriting conventions as a big shared joke. "Remember Jimmy's friend Henry, who we met briefly at the opening of the film?" Black asks in the script for 1991's "The Last Boy Scout." "Of course you do, you're a highly paid script reader or development person."

There's a brief subplot teaming Tony with a fatherless child that you half-expect will mutate into Daddy Issues sentimentality, but it doesn't, because Tony doesn't roll like that. Downey narrates the beginning and end of the picture. I wish Black had gone all-out and had him narrate the entire thing, a la "Kiss Kiss, Bang Bang," with asides into the camera: "Hey, you know what I'm gonna invent next? A Hulk signal. The next film'll be 20 minutes long." 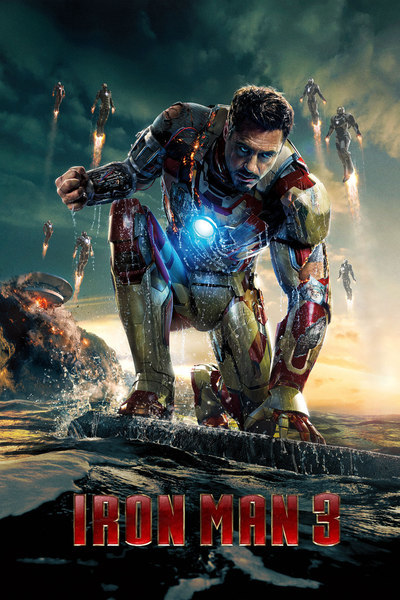 Rated PG-13 for sequences of intense sci-fi action and violence throughout, and brief suggestive content.

Ben Kingsley as The Mandarin