There are two post-credits sequences in "Captain America: The Winter Soldier," and it would be useless and unwise for me to spoil either. One of them will make no sense to you until you've seen the film. The other made no sense to me and I HAVE seen the film. I couldn't explain it if I tried, because it is merely set-up for the next Marvel movie. The audience I was with seemed to know what was going on (there were gasps). Whatever it is, it must have been pretty damn good.

I cop to being in the dark about the minutiae of the Marvel Universe. Outside of Spider-Man, which I read as a kid, everything I know about superheroes I've learned from their movies. My problem with many of them is that they only preach to the choir, operating under the assumption that everyone in the audience knows all the hymns. It's a lot easier—and lazier—for a screenwriter to simply do a roll call of characters and events while letting fans fill in all the blanks. Sometimes the onscreen information is so sparse that the studio should pay you for doing all the work. Plus, the slavish devotion to lore sometimes comes at the expense of making a good movie.

With that said, "Captain America: The Winter Soldier" is a very good movie, the rare film in this genre that serves as both entry point and continuation. For a change, you can walk in cold and you won't be too lost. The actors inject some welcome, unexpected emotion into their characters. Despite the fight sequences' occasional visits to the Jason Bourne/Cuisinart school of editing, the action scenes are suspenseful. And the story has a hint of the '70s era paranoia films that starred Robert Redford and Warren Beatty.

Speaking of Redford, he shows up in "Captain America: The Winter Soldier" as the type of shady power figurehead he would have been running from in his Sydney Pollack movies. Alexander Pierce is a bigshot at S.H.I.E.L.D., in charge of a defense project that has more than a hint of "Minority Report" to it. Once launched, it has the ability to zap millions of potential and actual threats with the push of a button. Of course, this needs to fall into the wrong hands, and Pierce has no problems finding a few. Redford clearly relishes his villainy, but he makes the expert decision to underplay it even while shooting people in cold blood.

When S.H.I.E.L.D. becomes compromised, and it looks as if Nick Fury (Samuel L. Jackson) is behind it, Pierce sends out an amazing amount of firepower to kill him. The most impressive weapon in his arsenal is The Winter Soldier of the title, a Russian assassin with a metal arm and an intensity matched only by another of his targets, Captain America (Chris Evans). Avoid the IMDB if you don't want to know who The Winter Soldier is, but I expect you know already. I won't tell you anything except that the final showdown between hero and assassin is rife with a refreshing amount of fraternity and sacrifice.

"Captain America: The Winter Soldier" re-introduces Evans' nearly 100 year old character, Steve Rogers, as he is jogging around Washington D.C. Rogers runs his laps so quickly (after all, he IS a superhero) that he keeps passing Sam Wilson (Anthony Mackie) before Wilson can complete one of his. "To your left!" Rogers keeps yelling as he passes by, much to Wilson's bemused annoyance.

When the two officially meet, Mackie and Evans play the short scene in a manner that immediately suggests the start of a beautiful friendship. (This makes sense if you know who Sam Wilson really is.) Their chemistry allows us a more personal investment in their action sequences, some of which I'm almost ashamed to admit had me worried for the good guys.

What struck me most about how Mackie, Evans and Scarlett Johansson (who returns as Natasha Romanoff) interact is the way they look at each other. Watch their body language as they gently tease each other in their quiet scenes, and notice how directors Anthony and Joe Russo frame them. There's a genuine emotional shorthand at work, especially from Johansson, who is excellent here. Jackson's Nick Fury also has a good rapport with Evans, whose "aw shucks" boyishness is a perfect fit for a guy named "Captain America." Jackson does more with a line reading than some of his lines deserve.

Jackson's Fury also gets a good amount to do in "Captain America: The Winter Soldier," including a leading role in the film's best action sequence, a demonstration of just how indestructible (or rather, destructible) Fury's motor vehicle is. He also gets one of those "Deep Blue Sea" moments you will not see coming, and a nod to "Pulp Fiction" that only eagle-eyed viewers will catch.

During its 136 minutes, "Captain America: The Winter Soldier" unleashes a lot of what the MPAA refers to as "intense sequences of violence, gunplay and action." Every villain has a weapon that fires a gazillion rounds of ammo, yet nobody is as accurate as ScarJo with a pistol. Screenwriters Christopher Markus and Stephen McFeely keep the plot streamlined and the verbal interplay brisk. They find not only a great cameo for Marvel veteran Stan Lee, they also work the gag as an excuse for the superhero equivalent of a throwback jersey.

Of all the Avengers characters, Captain America is probably my favorite. Heed that when you notice my 3-1/2 star rating. It's his old-fashioned corniness that intrigues me. Though I liked two of his movies, Tony Stark is an R-rated, debauched smartass trapped in a PG-13 convention. The Hulk only works in small doses. And I never knew what to make of Thor, and judging from his movies, neither do the filmmakers. Captain America seems closest, at least in these movies, to a character whose human alter-ego doesn't seem canned and set in stone. There's a vulnerability to Steve Rogers; he has growth potential, both as a man and a hero.

This is the most fun I've had at one of these Marvel movies since the first "Captain America" movie. Take that with whatever grain of superhero salt you wish. 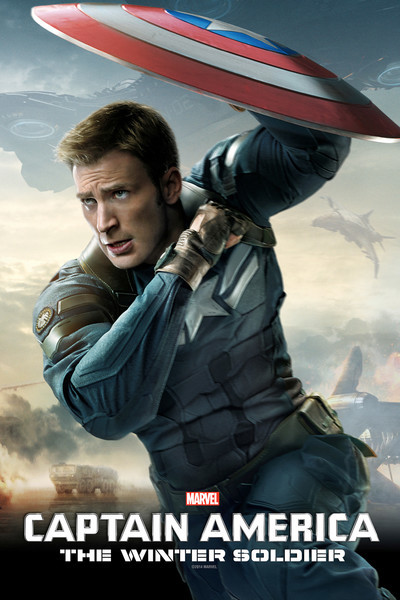 Rated PG-13 Intense sequences of violence, gunplay and action throughout