What makes a movie a "classic"? 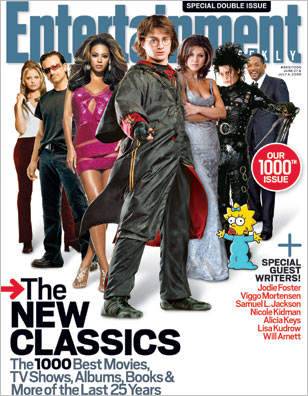 I wasn't old enough to experience the French New Wave first hand. My introduction to the New German Cinema (Fassbinder, Herzog, Wenders, et al.) was getting my mind blown by Werner Herzog's 1973 "Aguirre, the Wrath of God" when it was released in the US in 1977. The bossa nova craze was before my time, as was Elvis, but I vividly remember Beatlemania and felt that punk and grunge were mine. It's hard for me to imagine what it must be like to look back on some of the things I experienced first-hand and to approach them retroactively.

I've been thinking about this for a while -- what a pleasure it has been, for example, to see Steven Spielberg develop, having watched his TV movie "Duel" when it was first broadcast and being absolutely riveted; discovering the monstrous phenomenon of "Jaws" when it opened and created the "summer blockbuster" before we had a term for it; witnessing the remarkable suburban double-whammy of "E.T. The Extra-Terrestrial" and "Poltergeist" (in which Spielberg's presence was clearly felt) in the summer of 1982...

But what brought it to the forefront of my consciousness was this (last?) week's Entertainment Weekly cover story touting a big ol' list of 1,000 "New Classics" in film, music, theater, video games, etc. I'm not entirely sure what their definition of "classic" is meant to be, though among the terms they use to describe them are "iconic" ("Pulp Fiction"), "primal work of popular art" ("Titanic"), "quotable" ("Jerry Maguire"), "apotheosis of its genre" ("A Room with a View"), "most amazing" ("Children of Men")... and, um, "classic" ("When Harry Met Sally...").

"Our selections run the gamut from justly praised critical darlings... to benchmark genre fare..." writes Thom Grier in the intro. "...Quality was our guiding principle, but we took influence into account as well."

For some reason I am reminded of the first episode of an ill-fated 1979 Mary Tyler Moore television variety show in which the hostess stopped midway through to take a look back at highlights from earlier in the same hour as if 20 years had passed: "Oh my gosh! Look at my hair!"

Let me back up. All the "classic" Spielberg pictures I mentioned up above are from before 1983, the cut-off for EW's feature, but there was little doubt at the time that they were landmarks -- in part because they were so contemporary that we didn't necessarily conceive of them in historical terms just yet. I do remember coming out of a pre-release press screening of "Apocalypse Now" when a friend asked if I thought this would be thought of as a classic. I said I wasn't sure. It was the first time I reviewed a movie twice (for the University of Washington Daily) -- first positively, then negatively. Both were in earnest, and I think they averaged out.

It helps to understand the tenor of the times. It was August, 1979, and the Vietnam POWs had come home only six years earlier (or about as long ago as September 11, 2001, is now). After all the stories, the rumors, the controversy (and Francis had mortgaged his house!), it seemed like we'd never get to see this Big, Important Artistic Epitomization of the War. (Or, as Coppola himself had already proclaimed, a movie that wasn't about the war in Vietnam, it was the war in Vietnam.) And when it finally materialized, I really, really wanted it to be the overwhelming experience I thought it deserved to be (and that the first 2/3 convinced me it would be). Once the pre-release hype and excitement had worn off, I had to admit it still felt like 2/3 of a movie to me. But people approaching it now see it as a kind of museum piece, an "official classic." I've tried many times over the years to prove myself wrong again and convince myself that the whole Brando section works, but it never has for me. Today, I think "Apocalypse Now" is a film everybody needs to see, and contains moments of greatness, but is it a "classic." Depends on how you define the term.

When Spielberg's "Close Encounters of the Third Kind" appeared, the future of Columbia Pictures was said to be riding on its success. Michael Cimino's "The Deer Hunter" was one of the first mainstream American films about Vietnam, and as such was criticized by some for historical inaccuracies (the Russian roulette among them) while the metaphor escaped them. Cimino's next picture, "Heaven's Gate," was so expensive ($40 million -- about average for a Hollywood movie these days) that it brought down United Artists, the once-revolutionary studio started by Mary Pickford, Douglas Fairbanks and Charlie Chaplin. Anyone seeing the movie today might wonder what the fuss was all about.

When I was in college, the first phase of Godard's career (punctuated by "Weekend") was over. Alfred Hitchcock and Orson Welles released what would turn out to be their last features, "Family Plot" and "F for Fake," but we didn't know that at the time. Truffaut was still making movies. Fassbinder suddenly died -- which shocked, but did not necessarily surprise, us. And so on...

Is it possible to recapture the freshness of "She's Gotta Have It" (or the danger of "Do the Right Thing" -- which holds up now more as a warm comedy than an incendiary drama), the shock of "Last Tango in Paris" or "The Exorcist" or "The Texas Chainsaw Massacre" (1974)? Probably not. We see them with different eyes now, with the knowledge and experience of what has come since. The movies are still the same, but the social climate has radically changed. 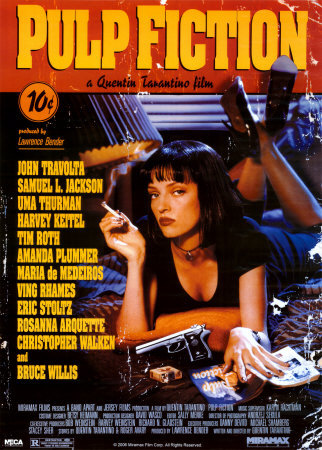 EW's Number One. With a bullet.

So, what else is new? That's the way it is, has always been, and always will be. My first reaction to EW's cover was that the whole idea is silly. Today's landmark is tomorrow's relic. But I had to admit there were movies I knew were "classics" the moment I saw them: "No Country for Old Men," "Brokeback Mountain," "Chinatown"... Others I loved but didn't anticipate how they would grow in stature and influence, as cult movies or mainstream classics: "Nashville," "Taxi Driver," "This is Spinal Tap," "Dazed and Confused," "Boogie Nights" -- even "The Big Lebowski" and "Austin Powers: International Man Of Mystery" to some extent. And there are so many others that are waiting to take their rightful place in some official canon: "Night Moves," "Cutter's Way" -- and movies that I wouldn't discover within five or six years after their initial release, when they didn't seem they belonged to the past, like "Pat Garrett and Billy the Kid" or "Once Upon a Time in the West" or "The Private Life of Sherlock Holmes"...

From the last quarter century, EW chose "Pulp Fiction" as its #1 classic, calling it "a time-warping, mind-bending work of movie-mad genius.... Its revolutionary structure (John Travolta dies... then lives!) opened a new universe of mainstream storytelling, but the eternal joy of 'Pulp Fiction' is that it recast the future of movies by living, so thrillingly, in the moment." I can't really argue with that, though it doesn't take into consideration what I see as the movie's flaws (I hate all the chewy, self-consciously pop-aware dialog), its negative influences (we're still suffering the "Tarantinian" fallout from wannabes far less talented than QT), and its overemphasized novelty (the structure wasn't really revolutionary -- it just didn't tell you the order in which its chapters were arranged, so you could be surprised to recounter characters in an unforseen context).

But I'm not going to begrudge "Pulp Fiction" the top slot. What nobody seems to remember anymore is that this little $7 million production was turned down by the Columbia/Sony subsidiary Tri-Star Pictures, and wound up grossing more than $100 million domestically, to the surprise of probably everybody except Quentin Tarantino.

What's your definition of "classic"? Record-breaking? Precedent-setting? Influential? Enduring? How soon can such a status be determined? (Films have to be at least 25 years old to qualify for the National Film Registry; acts don't become eligible for the Rock and Roll Hall of Fame until 25 years after the release of their first record.) Are their films from the 1990s and 2000s that you would already consider worthy of classic status? Have at it.