There are a couple of moments in “Jerry Maguire” when you want to hug yourself with delight. One comes when a young woman stands up in an office where a man has just been fired because of his ethics, and says, yes, she'll follow him out of the company. The other comes when she stands in her kitchen and tells her older sister that she really, truly, loves a man with her whole heart and soul.

Both of those moments involve the actress Renee Zellweger, whose lovability is one of the key elements in a movie that starts out looking cynical and quickly becomes a heart warmer.

The man she follows, and loves, is Jerry Maguire (Tom Cruise), a high-powered pro sports agent who has so many clients he can't really care about any of them. He spends most of his time as a road warrior, one of those dogged joggers you see in airports, racking up the frequent flyer miles in pursuit of the excellence they read about in pin brained best-sellers. One night he has a panic attack in a lonely hotel room, and writes a memo titled “The Things We Think and Do Not Say: The Future of Our Business.” One of the things he thinks is that agents should be less concerned about money and more concerned about their clients. That gets him a standing ovation in the office, but a few days later, when he's fired, he understands why agents do not say those things they think. Maguire stages a grandstand exit (his decision to take along the office goldfish plays awkwardly, however). But when he asks who's walking out with him, only Dorothy, an accountant he's met just once at the airport, stands up and says she believes in him. Dorothy is a widow with a cute little son (maybe just a mite too cute).

She also has an outspoken older sister, played by Bonnie Hunt with her usual exuberance and ironic cheer (she's almost always a delight to watch). The sisters live together in a house where the living room seems to be semi permanently filled by a kvetching self-help group for divorced women, who spend all of their time talking about men. Someone should tell them that resentment is just a way of letting someone else use your mind rent-free.

Only one client doesn't dump Maguire when the agency boots him out. That's Rod Tidwell (Cuba Gooding Jr.), a wide receiver for Arizona, who resents the crappy waterbed commercials Maguire puts him in, but sticks with him anyway. Rod's wife Marcee (Regina King) is her husband's shrewdest defender and biggest fan, and their marriage is a true love story--in contrast to Maguire's failing engagement to the power-mad Avery Bishop (Kelly Preston).

Avery is soon out of the picture, Dorothy begins to look less like an accountant and more like the most wonderful woman in the world, and under the influence of his ennobling new feelings, Jerry helps Rod learn to play from the heart and not just from the mind and the pocketbook. And somewhere along in there I began to feel that writer-director Cameron Crowe had bitten off more than he really needed to chew. The screenplay knows enough about sports agents to make that the subject of the whole film, and enough about romance, too, but there are so many subplots that “Jerry Maguire” seems too full: Less might have been more.

Still, the film is often a delight, especially when Cruise and Zellweger are together on the screen. He plays Maguire with the earnestness of a man who wants to find greatness and happiness in an occupation where only success really counts. She plays a woman who believes in this guy she loves, and reminds us that true love is about idealism. (Remember Franklin McCormick years ago on the all-night radio? “I love you because of who you are--and who I am when I am with you.”) The actual sports scenes are more predictable (right down to and including the big play that settles the season). But Cuba Gooding Jr., so strong in “Boyz N the Hood,” is fine here in a much different role. Finally the movie is about transformation: About two men who learn how to value something more important than money, and about two women who always knew. 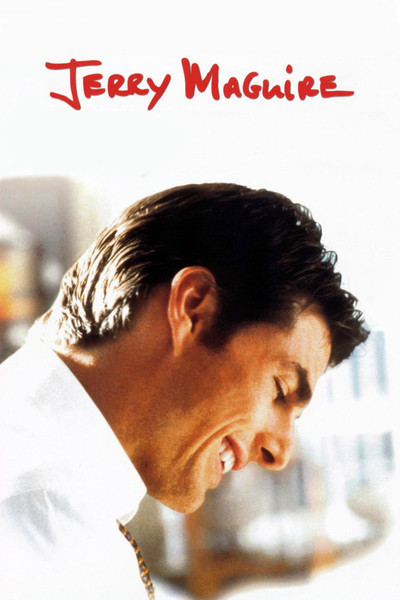