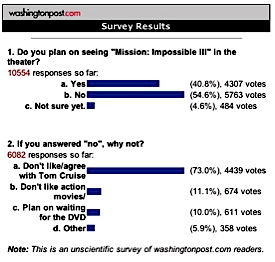 The release of "Mission: Impossible III" on Friday is being touted by some as a referendum on Cruise's career as a celebrity with marquee value. It's Cruise's third time out as superspy Ethan Hunt (no, not that guy who used to be married to Uma Thurman -- the secret agent dude!), so the franchise may have quite a bit of steam of its own. But after the Scientology-backed clampdown on the "Trapped in the Closet" episode of "South Park" in the US and the UK (and today, by the way, happens to be Day 50 of "South Park" Held Hostage) and other bizarre off-screen behavior, Cruise's box-office status is being... questioned.

Andrew Sullivan has reminded his readers to observe the "M:I:III" boycott he kicked off after the "South Park" incidents in March. And a poll over at the Celebritology column at washingtonpost.com is asking readers:

Does Tom Cruise's hype help or hurt "Mission: Impossible III" at the box office? Are you down for a good action flick no matter the star's off-screen shenanigans or are you one of the increasing number of people who plan to boycott based on Cruise's behavior?

You can take the poll yourself here. It's 100 % guaranteed unscientific, which may or may not please Cruise, who's into Scientology but not so much into science itself. As of Wednesday afternoon, two days before the "M:I:III" opening, 54.6% were saying they didn't intend to see the movie, and 73% gave their dislike of Cruise as their reason. Will the cumulative impact of all Cruise's mini-"scandals" in the last year have any effects at the box office? Wait and see. 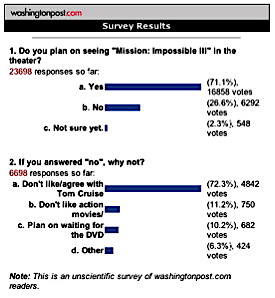 Personally, I find Cruise very difficult to swallow as an actor. As I've said before, he now seems incapable of expressing any emotion but grim determination. Sometimes it's coupled with desperation, sometimes with ambition, but it's grim either way. For years, he's squeezed out a career by playing variations on the same cocky and unlikeable character, an arrogant and callow youth (now 43) who gets his comeuppance and becomes a "better person." Martin Scorsese first made this work spectacularly in "The Color of Money" -- likewise Barry Levinson in "Rain Man," Cameron Crowe in "Jerry Maguire" and Stanley Kubrick in "Eyes Wide Shut." By the time of his Oscar-nominated turn in Paul Thomas Anderson's "Magnolia," however, Cruise had become such a caricature of himself that his cocksure smugness had become his schtick. Cruise was the weakest element in Steven Spielberg's "War of the Worlds" (and I'm including that phony happy ending), but the movie was bleak and spectacular enough to distract audiences from the black hole at its center. At least "M:I:III" has Billy Crudup and Ving Rhames and Laurence Fishburne and Phillip Seymour Hoffman (who really sucked -- or blew -- in the big-budget "Twister" but has been consistently great since).