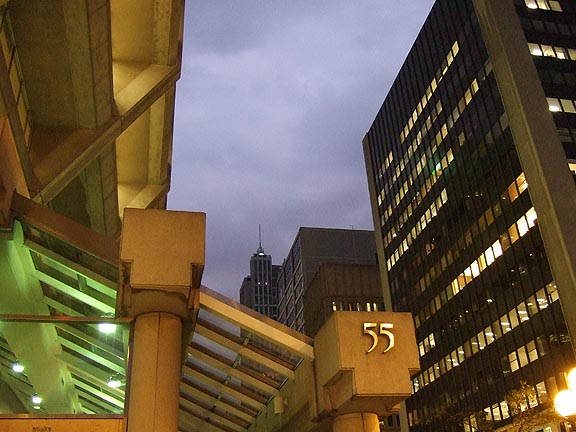 There are movies being shown in six or eight theaters in the building on the left. That's all I know. (photo by Jim Emerson)

Film festivals allow you the opportunity to see movies without knowing much of anything about them in advance. If you don't want to, that is. The problem with this is that, unless you have a festival catolog (the hefty TIFF 2007 one is 480 pages and sells for $37), you also have no idea of what you don't know about. Today, I arrived more than a half-hour early for a screening of Todd Haynes' "I'm Not There," only to discover that the previous film (something about "Cassandra") was running about 45 minutes late. The Toronto festival is quite punctual, so this was a most unusual occurrence. The staff person allowed some of us into the theater to sit through the end of the previous movie, in which case we would be able to retain our seats for the one we'd actually come to see.

Now, normally I'm like Woody Allen in "Annie Hall" and I don't go into movies late. I rarely leave early, either, even if I think the movie's terrible. In this case, I thought I'd just go in and rest my eyes, since I knew nothing about the film I was about walk into the middle of. It soon became apparent that it had Ewan McGregor and Colin Farrell in it, as two brothers who were involved in some kind of murder scheme. It was thoroughly mediocre, and I wondered how some first-time commercial filmmaker had lured such a cast, especially with this lackluster script. (Tom Wilkinson showed up, too.) But, I was also seeing it from the middle, sometimes with eyes wide shut, because I was only there to have a seat for the next movie.

When it ended (badly), the credits appeared and I immediately recognized the typeface. It was Woody Allen's latest movie. Surprise.

I write this not to report on a movie I only saw the last half of, but because as I was sitting there I was thinking about how little I have known -- quite deliberately -- about the films I have seen before I have gone to see them. (Of course, I hadn't intended to see even part of this one. That was just an accident.) For the most part I'm trying to maintain blissful ignorance, going into these films with no preconceptions except that I may know who the director is, or who one or two of the cast members are. Or somebody I trust has recommended it. That's as much as I want to know.

Some people at the press and industry screenings seem to know everything about them before the lights go down, but I don't listen to them. So here, in the interest of full disclosure, is how much I knew about some of this year's TIFF movies going in (including a few I haven't yet seen):

"Eastern Promises": David Cronenberg movie with Viggo Mortensen. Not a clue as to what it was about, who else was in it, what it was based on (if anything), or what the title meant.

"Michael Clayton": George Clooney wearing a suit and tie. Nothing else.

"4 months, 3 weeks, 2 days": Romanian film about an abortion that won at Cannes.

"Chop Shop": Second film by Ramin Bahrani ("Man Push Cart"). Unaware of where it was set or what it was about, except I thought there was a kid in it.

"Secret Sunshine": Asian film (I don't even know what country) that won an award for something somewhere (I think it was Cannes). A friend said I should see it.

"The Orphanage": Mexican. Produced by Guillermo Del Toro. Appeared to be kinda creepy, and somebody had compared it to "Pan's Labyrinth."

"Margot at the Wedding": Written and directed by Noah Baumbach ("The Squid and the Whale"). Nicole Kidman, Jack Black, and Jennifer Jason Leigh. That's all.

"Persepolis": Black and white. Animated. No idea of language or subject.

"Atonement": Based on Ian McEwan novel I haven't finished (but have at home). Don't know who directed it or who's in the cast.

"The Man From London": Directed by Bela Tarr.

"I'm Not There": Todd Haynes' movie in which several people play Bob Dylan. I knew Cate Blanchett was one of them.

"No Country for Old Men": A Coen brothers movie, based on Cormac McCarthy's book (which I'd read). Tommy Lee Jones and Javier Bardem were in it. Roger really liked it.

"Into the Wild": Sean Penn-directed adaptation of Jon Krakauer's biography of Christopher McCandless, which I read about ten years ago and really liked. I knew Emile Hirsch was the main character, but I couldn't recall any movies I'd seen Emile Hirsch in before.

(Once again, my brain is so full of movies I want to write about that I can't concentrate on any one long enough to finish writing about it. I've got about four posts partly written. Hope I'll get a chance to within the next 24 hours. In the meantime, there are more movies to see...)