The Double-Best of the Year 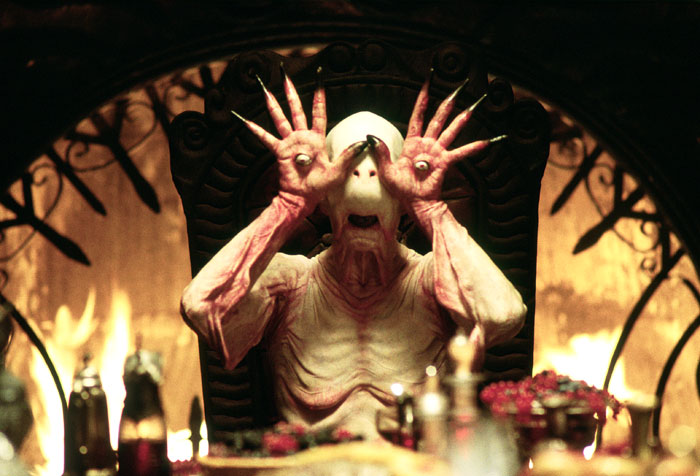 The forthcoming "Grindhouse" notwithstanding, the motion picture double bill is a nearly dead art. Marquees have always been plugged with twosomes that just happened to be from the same distributor (it's the same kind of logic that gives us a "The Robert Altman Collection" on DVD, consisting of "M*A*S*H," "A Perfect Couple," "Quintet" and "A Wedding" -- simply because they were all released by 20th Century Fox). On a slightly more creative level (sometimes), today's few remaining revival houses might connect two films by language, genre, director or star.

There's absolutely nothing wrong with a fairly straightforward double bill of, say, Scorsese/De Niro pictures ("Mean Streets" and "Taxi Driver") -- or David Lynch LA nightmares ("Lost Highway" and "Mulholland Drive") or Michael Haneke puzzles ("Code Unknown" and "Cache" ) -- all of which are illuminating pairings. As I like to remind myself, you invariably view movies through the prism of the movies you've already seen -- particularly those you've seen recently, and never more so than when you see two of 'em back to back. You can't help but make associations, and a well-considered double bill can help you see both movies from new angles -- emphasizing some aspects over others, and creating a kind of conversation between the two films.

When I was in college, at the University of Washington, I got to program hundreds of movies in the student film series -- a different double bill every Friday and Saturday night (and sometimes Wednesdays and Sundays, too!) over a couple of years -- and I had a blast doing it. My favorite strategy was to put an older or less well-known (and cheaper to rent!) film with a more recent or recognizable title in hopes of pulling in an audience (and maybe blowing people's minds!).

Put "Citizen Kane" with "All the President's Men" and all kinds of things start happening: They're both detective stories, journalistic stories, overshadowed by famously flawed and powerful public/private men who remain essentially unknowable to the end... Or put Francis Ford Coppola's "The Conversation" with Michel Deville's "Dossier 51," and you have two accounts of psychological meltdowns under the glare of intense surveillance -- one by the watcher and one by the watched -- but both from the perspective of the voyeur. Or how about Peckinpah's "Bring Me the Head of Alfredo Garcia" with Huston's "The Treasure of the Sierra Madre"? Eric Rohmer's "Preceval" with Robert Bresson's "Lancelot du Lac"? I would love to have paired Brian De Palma's "Hi Mom!" with Quentin Tarantino's "Reservoir Dogs" -- for perverse structural and audience-freaking reasons. On the other hand, I don't recall exactly what I was going for when I put Bunuel's "L'Age d'Or" with Godard's "Weekend" (1968), except that I knew they were both shocking and transgressive... and, most of all, I really wanted to see them. Anyway, you can set up all kinds of thematic, historical and stylistic clashes and consonances reverberating between films....

So, that's what I've decided to do with some of my favorite movies of 2006. Rather than a traditional "ten best list" (which I've already contributed to MSN Movies), here are my suggestions for fruitful ways of viewing some of the year's best movies, alongside some of the best of past years. Make an evening of it -- in theaters and/or on DVD!

2) Tom Tykwer's "Perfume" and Michael Powell's "Peeping Tom" (1960). Voyeurism and possession, via smell and sight. To paraphrase Hannibal Lecter: The killing is incidental. What does he seek? (Alternate: Jonathan Demme's 1991 "The Silence of the Lambs," of course!)

4) Robert Altman's "A Prairie Home Companion" and Altman's "Nashville" (1975). Altman set up this conversation across the decades himself, concerning living and dying, onstage and off, through music, politics and commerce.

5) Neil Marshall's "The Descent" and Philip Noyce's "Dead Calm" (1989). Tales of maternal grief and demons unleashed -- one in the claustrophobic underground darkness, the other on the bright, wide-open sea. (Alternates: James Cameron's 1986 "Aliens," Peter Weir's 1975 "Picnic at Hanging Rock," Neil Marshall's 2002 "Dog Soldiers." Each juxtaposition is going to give you a different experience.)

6) Eric Steel's "The Bridge" and Alfred Hitchcock's "Vertigo" (1958). Mysteries of suicide, identity and madness -- and the plunge into the chilly waters beneath the majestic (romantic, tragic) monument of the Golden Gate Bridge. (Alternate: Stanley Nelson's 2006 "Jonestown: The Life and Death of People's Temple" -- another documentary about a suicidal landmark that looms as large in San Francisco's history and collective psyche as the Bridge.)

7) Doug Block's "51 Birch Street" and Andrew Jarecki's "Capturing the Friedmans" (2003). If those suburban walls could talk: Family portraits that test the limits of what we can know about the members of our own families -- one meditative, the other melodramatic, but both deeply enigmatic. (Alternates: As I said in my review of "51 Birch Street," it should be shown after every Hollywood romantic comedy that ends with a wedding clinch -- any happy plot that ends with a marriage knot...)

8) Ryan Fleck's "Half Nelson" and Kelly Reichardt's "Old Joy." I'll just quote from the comments in my earlier list: "Two tales of struggle with personal and political idealism as Americans (in the urban Northeast and the bucolic Pacific Northwest, respectively) age into their 30s and 40s, worried about what they've lost, who they've become and who they're going to become."

9) Clint Eastwood's "Flags of Our Fathers" and "Letters from Iwo Jima." Too obvious? They're meant to be seen as two parts of a single film. They make their own bloody gravy. (Alternate: John Ford's 1945 "They Were Expendable.")

10) Larry Charles' (and, of course, Sacha Baron Cohen's) "Borat" and the Marx Bros.' "Animal Crackers" (1930). Lessons in comedy and socially disruptive anarchy. And, yes, making fun of all kinds of people. Including those that Harry Dean Stanton so memorably described in the great "Repo Man": "Ordinary f---kin' people. I hate 'em." That's funny. (Alternate: W.C. Fields' 1934 "It's A Gift" -- particularly because of the scene with the blind man destroying Fields' shop. And because it's one of the funniest movies ever made.)

11) Rian Johnson's "Brick" and the Coen Bros.' "Miller's Crossing" (1992). Both have common roots in Dashiell Hammet's "Red Harvest" -- and revel in mangled motives and tongue-tangling slang. (Alternate: Howard Hawks' "The Big Sleep" (1946) -- and most especially Season One of "Veronica Mars.")

I could go on. I'd like to see Steven Soderbergh's "The Good German" on a double-bill with (no, not "The Third Man," not "Casablanca") Rainer Werner Fassbinder's "The Marriage of Maria Braun" or Billy Wilder's "Foreign Affair." Or "The Break-Up" with "The Awful Truth" (mainly for the contrast -- "The Break-Up" is not a romantic comedy!).

Do some programming of your own. And let us know what you come up with...