The two families in Robert Altman's “A Wedding” live right there in the closets with their skeletons. They present a cheerful facade to the outer world, of old Lake Forest money on the one hand and new Southern money on the other. But just beneath the surface there are jealousies and greeds and hates, and the random dirty tricks of fate.

Altman plunges gleefully into this wealth of material; there are forty-eight characters in his movie, give or take a few, and by the film's end we know them all. We may not know them well -- at weddings there are always unidentified cousins over in the corner -- but we can place them, and chart the lines of power and passion that run among them. And some of them are drawn as well as Altman has drawn anyone.

That's because “A Wedding” is a lot deeper and more ambitious than we might at first expect. It begins in comedy, it moves into realms of social observation, it descends into personal revelations that are sometimes tragic, sometimes comic, and then it ends in a way that turns everything back upon itself. The more you think about what Altman's done, the more impressive his accomplishment becomes.

“A Wedding” aims to upset our expectations. It takes our society'smost fertile source of cliches and stereotypes -- a society wedding --and then chisels away at it with maniacal and sometimes savage satire.

Nobody gets away: not the bride and groom, so seemingly "ideal;" not the loving parents on either side; not the relatives, with their little dramas that are no doubt played out on every family occasion; and not even the staff of wedding coordinators, chefs, photographers, musicians, and other accomplices.

Altman begins in solemnity and ceremony, with the high Episcopalian wedding. Desi Arnaz, Jr., and Amy Stryker, as the wedding couple, are all but lost in the chaos: The bishop fumbles his lines, a camera crew maneuvers awkwardly behind the palms, and, meanwhile, back at the mansion, the groom's grandmother (Lillian Gish) drops dead of anticipated mortification.

Her death is concealed when the wedding party returns to the mansion: Concealed from the family and from the single outside guest who turns up for the magnificently catered affair. Altman introduces us almost effortlessly to the house jammed with people; his compositions allow characters to be established in the backgrounds while the plot is being pushed ahead in the foreground, so it's as if we're wandering around the house like everyone else.

There are any number of subplots. The parents of the groom are Nina Van Pallandt, whose drug habit is ministered to by the family doctor, and Vittorio Gassman, an Italian who seems to have sinisterassociations in his past. The bride's parents are Carol Burnett, allsweetness and convention until -- gasp! -- she's wooed by one of the
guests, and Paul Dooley, vulgar, hard-drinking, with a tad too muchaffection for his youngest daughter (Mia Farrow).

Farrow, it develops, is pregnant by her sister's new husband,perhaps, or (it develops) by any other member of his class at militaryschool. Other characters reveal themselves as drunks, unreconstructed Communists, secret weepers, fountains of jealousy, reservoirs of lust, or advocates of diverse sexual proclivities.

This is the sort of material that easily lends itself to farce, and, when it does, Altman cheerfully follows. But he leads in other directions, as well. He moves so slyly from one note to another that when Pat McCormick attempts a clumsy seduction of Carol Burnett, we'removed simultaneously by comedy and pathos. And there are scenes of extraordinary emotional complexity, as when a singalong is organized in the basement dining room, or when Nina Van Pallandt tearfully and defiantly reviews the terms under which she's lived her marriage.

Like Altman's other movies with lots of characters (“M*A*S*H,”“McCabe and Mrs. Miller,” the incomparable “Nashville”), “A Wedding” doesn't fit easily into established feature film categories. For some viewers, it won't satisfy; it doesn't set up situations and then resolve them in standard ways. It's got all the disorganization and contradictions of life, and then Altman almost mystically giveseverything a deeper meaning by the catastrophic surprise he springs on us near the end. 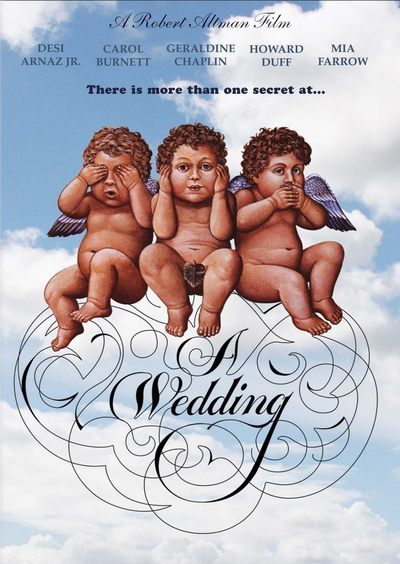