Is it wrong to swoon over a soulful-eyed animated Cockney ape named Johnny who is built like Dwayne Johnson and croons like a boy-band angel? If it is, I don’t want to be right. His silky and all-too-brief version of Sam Smith’s “Stay With Me” gave me shivers.

Not that my fondness for this leather-jacketed gorilla of my dreams (voiced by Brit actor Taron Egerton of ”Kingsman: The Secret Service” and “Eddie the Eagle”)—just one of several standouts among the warbling menagerie that populates ”Sing”—has totally blinded me from acknowledging that this jukebox musical barely has an original anthropomorphic bone in its fur-bearing body.

Don’t go into “Sing” expecting it to be some kind of cartoon answer to “La La Land” with animal wise-crackers stepping in for snappy human toe tappers, despite its similar heartfelt portrayal of the highs and lows of showbiz and sunny candy-hued cityscape. But, luckily, its makers know all too well how to fully exploit the power of a catchy pop song. There are more than 65 dynamite ditties—from the Beatles and Irving Berlin to Beyonce and Carly Rae Jepsen—exploited to their full crowd-pleasing potential as the choices smartly span the decades.

On the surface, this story of koala bear impresario Buster Moon (Matthew McConaughey, nicely capturing this pint-size showman who is part huckster, part dreamer and part the actor’s exuberant strip-club emcee from “Magic Mike”) who decides to give his run-down theater a boost by staging a talent contest is simply plugging into the ongoing popularity of reality shows such as “American Idol” and “The Voice.”

But director/writer Garth Jennings (live-action cult faves “The Hitchhiker’s Guide to the Galaxy," “Son of Rambow”)—expanding upon a concept conceived by Illumination CEO and founder Chris Meledandri (whose animation house was also behind the summer success “The Secret Life of Pets,” and the Minions phenom)—relies on an even older tradition. Namely, those “Hey, let’s put on a show” movies from the ‘30s and ‘40s that paired a youthful Judy Garland and Mickey Rooney as they saved the day with song and dance. There is a reason it’s a tried and true underdog formula, and it mostly works here.

Turns out there are plenty of amateur hopefuls looking for a break in “Sing,” whose balmy palm-tree-lined urban setting is never named, especially after Moon’s elderly assistant Miss Crawly (a crone-like stooped green lizard with a glass eyeball whose comical croak is provided by Jennings) mistakenly ups the prize ante on a flier announcing the competition from $1,000 to $100,000.

The ark’s worth of would-be contestants that storm the theater to audition range from a trio of bunnies who twerk their fuzzy behinds to the naughty “Anaconda” to a Teutonic pig nailing “Bad Romance” in a tight gold-glitter jumpsuit. Buster quickly whittles down the choices to five finalists and, just as they do on every TV singing contest, they all have an emotional back story to share.

There is Rosita, a porcine stay-at-home mom to 25 little piggies, whose inner diva is buried under her domestic drudgery (Reese Witherspoon, dusting off the vocal skills that helped her win an Oscar for 2005’s “Walk the Line”); the aforementioned Johnny, who must balance his performing ambitions with his hoodlum father’s insistence that he mans the getaway car for a gang of robbers; Mike, a shady white mouse (Seth MacFarlane in Rat Pack mode) who plays Dave Brubeck’s “Take Five” on his sax for spare change and belts out ballads by Sinatra; Ash, a porcupine punk-rock teen girl (Scarlett Johansson, with a husky growl that rattles walls) whose less-talented boyfriend is ticked that she was picked as a solo act; and, last but not least, Meena, a shy elephant with abundant abilities (supplied by up-and-comer Tori Kelly) who must conquer her stage fright before she makes the move from her stage hand duties.

Jennings makes a wise choice to eschew loading up on pseudo-hip pop-culture gags, a sometimes irksome DreamWorks trait, or insisting on giving characters a heroic arc, like most Disney fare. Instead, he goes for old-school Warner Brothers visual humor such as how Miss Crawly’s fake eye tends to pop out at inopportune times or Rosita’s inventive DIY way of dealing with her childcare crisis. He allows his camera to slip and slide around the set pieces, including a rooftop escape route that would do King Kong proud, and knows how to stage the singing acts, dramatic lighting and all.

But all this is just a build-up to “Sing’s” crowning glory of a 30-minute finale. Just when Buster’s plans all go kaput in a sequence that rivals “The Poseidon Adventure,” a heavenly voice is heard. And, suddenly, the contest takes a back seat to simply celebrating and sharing one’s vocal gifts to bring joy to others with a full-blown concert as these critters break loose with well-curated classics by the likes of Stevie Wonder and Elton John.

That Jennifer Hudson briefly lends her glorious melodic tones to a regal grande dame sheep, a role she shares with Jennifer Saunders of TV’s “Absolutely Fabulous,” is apt since the last time I heard audiences rapturously cheering a filmed musical performance was for her dynamic take on “And I Am Telling You I'm Not Going” in “Dreamgirls.” Don’t be surprised if those sitting next to you at “Sing” react in the same way to some of these showstoppers. 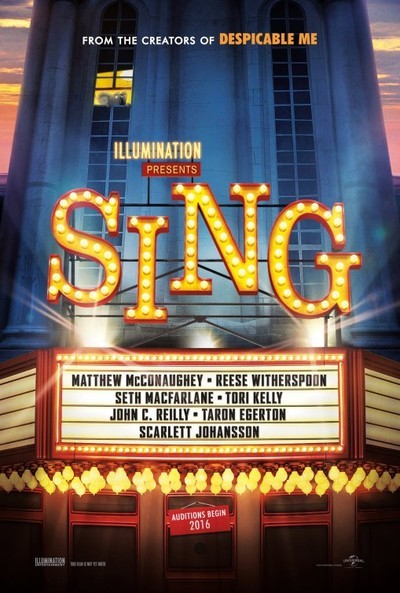 Rated PG for some rude humor and mild peril.