The Secret Life of Pets

“The Secret Life of Pets” is a kind-hearted, sweet story about the unique relationship not only between pets and their owners but between pets and major cities like New York. It may open with lovable terrier Max (voiced by Louis C.K.) speeding through Central Park in the basket of his owner Katie’s (Ellie Kemper) bike, but it’s more about apartments, fire escapes, roads and sewers than parks, and how a lovable group of animals is forced to traverse them on one crazy day. To be more direct, it’s an almost beat-for-beat rip of Pixar’s “Toy Story,” from the idea that we don’t know what our toys/pets do while we’re gone to the “new guy who mixes things up” storytelling dynamic. In the end, it’s too aggressively likable to hate—especially given its strong character design and excellent voice work—but simultaneously too shallow and forgettable to really register. The best animated movies give us themes to discuss with our kids when they’re over and work for both adults and children. “The Secret Life of Pets” is the disposable, summer diversion that many families will be looking for as temperatures rise and the start of school seems so far away, but most won’t be able to remember after they see it.

Max narrates this story of the day that his owner got a second dog, a big hairball known as Duke (Eric Stonestreet)—and the visual offset between tiny Max and giant Duke offers a Laurel & Hardy charm that I wish the movie played with more. When Max decides he’s not ready to share space and vie for Andy’s, I mean, Katie’s love, he tries to frame Duke for destroying their owner’s apartment. Before you know it, Max and Duke are on the street, hoping to avoid both animal control and a group of sewer-dwelling “flushed” pets who are organizing a revolution against the humans, led by the scene-stealing bunny named Snowball (a great, energetic turn by Kevin Hart).

The pampered dog named Gidget (Jenny Slate, who I'd like to do voice work in every major animated from now on if at all possible) happens to notice that the object of her affection in the apartment across the way (Max) is missing and leads a posse to find him that’s made up of other house pets from nearby flats, including temperamental cat Chloe (Lake Bell), hyperactive dog Mel (Bobby Moynihan) and even a hawk named Tiberius (Albert Brooks), forced to fight his instinct to eat every animal with whom he’s now aligned. “The Secret Life of Pets” is an adventure tale, a story of two dogs trying to find their way home while their friends come to the rescue.

And yet there’s not much adventure to it. At a certain point, one realizes that “The Secret Life of Pets” doesn’t really have a lot of story, cramming so many characters into its brief 90-minute running time that they’re not given much to do. There are no real stakes. When we watch “Toy Story” or “Wall-E,” we honestly fear for the safety of the characters involved. Any threat in “The Secret Life of Pets” is exaggerated—the bumbling animal control nitwits, a ritual with a deadly snake—and when the writers do risk getting a bit emotional involving a subplot about Duke’s former owner, they run back to the action before it can get too real. There's a draft somewhere of "Pets" with a few less characters and a few more stakes that works better (and could also become the inevitable sequel, now that the introductions are out of the way).

While “The Secret Life of Pets” is undeniably a dip in a kiddie pool compared to the deeper swimming lessons of better animated films, it works on those terms. Max is the kind of relatable protagonist to which kids will be attached (my seven-year-old was) and the supporting characters are way more memorable than standard non-Pixar fare, enlivened by great voice work from people like Moynihan, Brooks, Hart and especially Slate. There’s also something to be said for the relative unpredictability of “The Secret Life of Pets.” Whereas I felt like I could chart “The Angry Birds Movie” from first beat to last after seeing the preview, the oppressive advertising for this flick has actually held back some of its twists and turns to the degree where I was never quite sure where it was going next.

Ultimately, “The Secret Life of Pets” is not unlike the big dog named Duke who sets its plot in motion—sweet, likable, but a little dim. It’s worth a look for families because it doesn’t talk down to kids and may even further their appreciation for the household pet. Is that too low of a bar in a world that includes more ambitious fare like “Zootopia” and almost everything that Pixar and Studio Ghibli does? Arguably, but if you approach this shaggy dog with the right expectations then you’ll probably find it affable enough to take home with you. And it won’t lick your face. 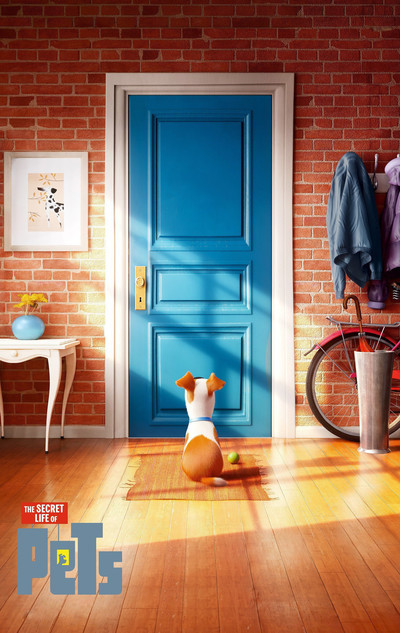