One complaint that has always dogged the James Bond franchise over the years is the inescapable fact that while the films seem to be loaded with gratuitous sex and violence in theory, they never quite manage to show them in any great detail. Obviously, the decision to imply more than display has served the producers for more than a half-century, but can you imagine what it would be like if a Bond film were to include all the seamier elements that they have only hinted at in the past? The early word on the over-the-top action-comedy "Kingsman: The Secret Service" seemed to suggest that it would pay homage to the Bond films of old—the ones made before the series took its turn towards the comparatively serious with the arrival of Daniel Craig—while including all the Good Parts that had been largely absent in the past. Alas, it seems to have taken its inspiration from one of the lesser Roger Moore efforts than the classic Connerys and the result is a fitfully amusing but increasing tedious and occasionally appalling mess that plays like "The Man with the Golden Gun" with ridiculous amounts of gore and severed limbs on display, though the nipples this time around are not so much superfluous as they are distressingly nonexistent.

Based on the comic book from Mark Millar and Dave Gibbons, "Kingsman" posits a top secret British espionage group that is inspired by King Arthur and his knights (whose names the members appropriate for their code names), based in a seemingly ordinary Savile Row tailor shop and regularly saves the world without getting into all the political mumbo-jumbo that has affected the efforts of governmental spy organizations. Having lost their Lancelot after a one-man effort to rescue a kidnapped scientist (Mark Hamill), the group begins the process of recruiting a replacement and for his nominee, agent Harry "Galahad" Hart (Colin Firth) puts up Gary "Eggsy" Unwin (Taron Egerton), a seemingly ordinary young punk who lives with his mother and her abusive boyfriend and spends his days getting into dumb trouble. However, Eggsy is also the son of a former Kingsman who gave his life to save Harry and others when he was just a child.

Not surprisingly, Eggsy seems out of place among the far more sophisticated other candidates—only Roxy (Sophie Cookson) shows him any kindness or respect—and Kingsman leader Arthur (Michael Caine) expects him to wash out quickly. Also not surprisingly, Eggsy manages to last throughout the extended testing process designed to winnow the group down to one under the eye of Merlin (Mark Strong). This turns out to be slightly more intense than, say, the executive training program at Harrods—their barracks are quickly flooded while they sleep one night, there is a group skydive where they are informed that one of them is not packing a chute only after they make the jump and they are each given a puppy to raise and train. (Eggsy names his pug "JB" and in one of the films funnier jokes, we realize just how many fictional super-spies have shared those initials over the years.)

While all of this is going on, there is, of course, a diabolical plan with global implications being hatched by a megalomaniacal madman. Our super-villain is Valentine (Samuel L. Jackson), an astoundingly wealthy technological pioneer whose frustration at his inability to save the planet through the usual channels has led him to a more sinister approach that involves zapping the minds of the world's population via their cell phones and driving them to kill each other off. Not everyone is to be killed of course and he has also been recruiting or kidnapping celebrities and other dignitaries so that they can help to forge a better world once the riffraff is gone. If you need any further proof that Valentine is mad, consider that he snatches Iggy Azalea but evidently does nothing for Charli XCX even though it was her awesome chorus on "Fancy" that made that song the hit that it was.

It sounds fun in theory, I guess, and there are some entertaining moments of rude irreverence here and there but the giddiness gets a bit tedious after a while. The screenplay by director Matthew Vaughn and longtime collaborator Jane Goldman is kind of like the espionage equivalent of "Scream"—all the characters have seen all the James Bond movies and make frequent reference to their clichés. However, since the Bond movies were never famous for taking themselves seriously, what we have in "Kingsman" is a film making cartoonish jokes about films that were often cartoonish jokes.

Another thing that I found off-putting about "Kingsman," oddly enough, is that it is really, really violent. This may sound like a contradiction of my previously stated desire for a more overtly violent Bond film but Vaughn—whose previous credits include "Kick-Ass," another savagely brutal adaptation of a Mark Millar comic book—floods the screen with flying limbs and spurting blood throughout, and, while it is all done in a deliberately cartoonish and nihilistic manner, it is still way too much of a not-that-great thing.

On the other hand, the scene in which Valentine tests his weapon on a church congregation styled after those Westboro Baptist creeps is really grotesque—the idea of hateful monsters literally destroying each other, to the soundtrack strains of "Free Bird," no less, sounds funny but it goes on for so long and is so brutal (including spearings, shootings and an ax to the throat) that the joke is lost. Meanwhile, the sex is oddly non-existent other than a not-particularly-amusing bit involving a kidnapped Swedish princess offering particular sexual favors to Eggsy in exchange for saving the world and then—Spoiler Alert—making good on her promise.

"Kingsman: The Secret Service" is not without its compensations. While Egerton is fairly anonymous as the callow would-be Kingsman, Firth, Caine and Strong are clearly having fun with their parts and it is amusing to see Firth dressed to look like Harry Palmer, the rival Sixties-era British spy once played by Caine. (Jackson, on the other hand, is not quite as successful as the wildly lisping villain—since the character does not make very much sense, he never quite manages to get a fix on him.) As he has demonstrated in superior efforts such as "Layer Cake," "Stardust" and "X-Men: First Class", Vaughn is an undeniably stylish filmmaker and while this may not be a good movie, it is certainly a good-looking one. Also, the concept is promising, and, who knows, maybe when they get around to the next installment of the franchise they are clearly setting up, they will finally figure out the right tone and make a better movie as a result. Of course, I said the same thing after coming out of "Kick-Ass" and we all know how that turned out. 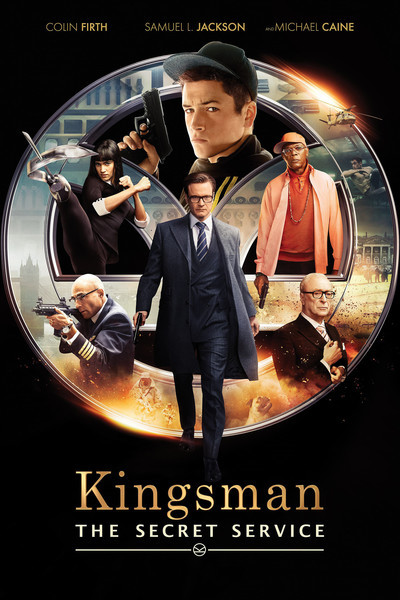 Rated R for sequences of strong violence, language and some sexual content