A plucky underdog athlete makes his way to the 1988 Winter Olympics in Calgary with the help of a former American sporting great who’s now languishing in disgrace. Ill-prepared and poorly dressed, he nevertheless has enough heart and perseverance to prove to his naysayers that he deserves to compete alongside the world’s best. Slapstick mishaps and—ultimately—feel-good triumph of sorts ensue, with plenty of perky training montages in between.

This is the premise of “Eddie the Eagle” and, with a few detail tweaks here and there, pretty much every other sports movie known to mankind. But in an odd bit of coincidence, it describes almost to a T 1993’s “Cool Runnings,” the story of the unlikely Jamaican bobsled team which also competed at the 1988 Winter Games. Its formulaic schmaltz is pure as the driven snow. And it's a shame that a movie about a man with zero athletic ability, who had the fearlessness to attempt a perilous 90-meter ski jump for the first time ever in front of a rapt Olympic audience, takes no chances.

Taron Egerton (“Kingsman: The Secret Service”) stars as Michael “Eddie” Edwards, a working-class, weakling Brit whose dream since boyhood was to be an Olympian, despite suffering from leg and knee ailments. Following several failed attempts to excel at track and field, he turned his attention toward winter sports and became an unexpectedly solid downhill skier—until the posh snobs on the British team kept him out of the 1984 games.

“Frankly, Eddie, you will never be Olympic material,” a British team executive tells him, condescendingly. It’s a frequent refrain he’s heard throughout his life: “Edday, you ah not an afflete,” says his singularly gruff and disapproving dad (Keith Allen). Mum in her mom jeans (Jo Hartley), meanwhile, is two-dimensional in the opposite way: She’s always sweetly supportive.

But the character at the center of director and longtime actor Dexter Fletcher’s film, Eddie himself, is ironically the least fleshed-out of all. He’s in nearly every single second of the movie, but he’s drawn so simplistically, he never feels like an actual human being. He’s all innocence and guilelessness in the script from Sean Macaulay and Simon Kelton, and Egerton plays him in a way that’s so goofy, the performance becomes off-putting rather than endearing.

Once Eddie sets his sights on ski jumping—an event Great Britain hadn’t competed in since the 1920s—he travels to Germany to train with the world’s greats, who’ve been tackling this terrifying sport since they were little kids. Hugh Jackman tries to bring some semblance of an edge to these otherwise gooey proceedings as Bronson Peary, the bad-boy American who becomes Eddie’s reluctant coach. (The movie conveys Bronson’s rebellious streak through the facile shorthand of showing him constantly smoking and sipping from his flask.) Jackman at least adds some much-needed charisma, even when he’s saddled with doing cringe-inducing stuff like comparing a ski-jump takeoff to sex with Bo Derek. But the scene, complete with a “When Harry Met Sally …”-style fake orgasm, only serves as a reminder of how impossibly childlike the 24-year-old Eddie is by comparison.

Fletcher does offer a varied visual approach to Eddie’s training, though, mixing up camera angles and often trying to create for us the dizzying heights and thrilling sense of flight he experiences. And, toward the end, in a wonderfully bizarre bit of casting, he brings in Christopher Walken as a legendary coach who literally wrote the book on ski jumping. (We actually see the cover of the book, “My Life in Ski Jumping,” with Walken’s unsettlingly serene face on the cover.)

Now that’s the movie I’d really like to see. 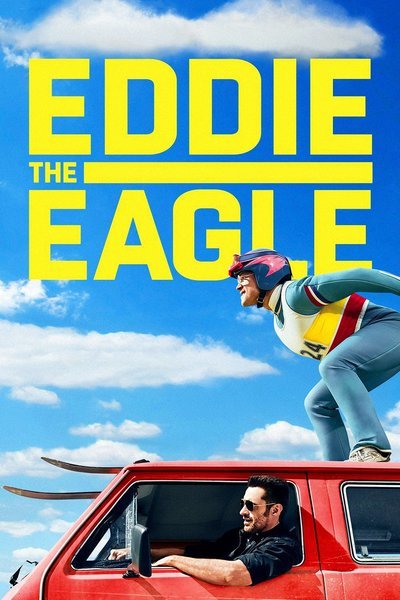 Rated PG-13 for some suggestive material, partial nudity and smoking.