My Dinner with Hervé

“My Dinner with Hervé” is a paint-by-numbers biopic that subscribes to the overused and often offensive cliché that someone’s death is required for a protagonist to straighten up and fly right. But that’s not the only tired trope on display. The film also places an uninteresting regular person in a famous person’s orbit, then proceeds to make the story all about the boring nobody. After flops like “My Dinner With Marilyn,” “Miles Ahead” and “Hyde Park on Hudson,” you’d think this particular plotline would be box-office poison. But “My Dinner with Hervé” is airing on HBO, where ratings are the true measure of success. This will win millions of viewer eyeballs but very few of their hearts.

The film’s title is an obvious play on “My Dinner with Andre,” the 1981 Louis Malle movie that also featured a conversation between a Frenchman and a writer. Here, the writer is Daniel Tate (Jamie Dornan), a recovering alcoholic who is 32 days sober and returning to his former London newspaper job after a stint in rehab. His editor gives him an interview with Gore Vidal in America, which excites Tate until he realizes he’s been commissioned to pen a hatchet job on a writer he admires. Adding insult to injury, Tate must also do a fluff piece on the anniversary of the 007 vehicle “The Man With the Golden Gun.” This assignment puts him in the orbit of the actor who played James Bond’s antagonist, Nick Nack, Hervé Villechaize (Peter Dinklage).

Villechaize has seen better days. He’s been reduced to a footnote in television history, the former attention-getting co-star of a show that’s been off the air for decades. Even so, fans still recognize him as Tattoo, the sidekick of the suave proprietor of “Fantasy Island,” Mr. Roarke. People even ask him to say Tattoo’s famous phrase, “De plane, de plane!” which Villechaize reluctantly entertains. Life post-Tattoo has been filled with many scandals and little success. Villechaize became tabloid fodder, as evidenced by a huge pile of newspaper clippings Tate cruelly displays at one point.

At first, “My Dinner with Hervé” seems to share Tate’s disdain for this has-been; Villechaize’s offer to pay for dinner gets rescinded when his credit card is declined. But writer/director Sacha Gervasi soon positions Villechaize as some kind of mad guru who challenges Tate to interrogate his own mistakes. After Gore Vidal (Michael Elwyn) angrily ends his interview because Tate is 20 minutes late, Villechaize shows up in a limo holding wads of cash earmarked for decadence. He promises Tate not only a juicy interview, but a final one.

Their evening together, which takes up much of the film, is a haphazard mess both in story and tone; it plays like an R-rated version of “Ferris Bueller’s Day Off.” Villechaize attacks Tate with a knife, crashes the limo and keeps offering his alcoholic travel partner booze. Gervasi doesn’t know how to pitch this material—are we supposed to laugh? Feel pity? Identify with Tate’s growing aggravation? All the while, Tate keeps running away from, then returning to, a man who may not be stable. And for what? Tate correctly pegs the story Villechaize is telling him as recycled material from the newspaper clippings he brought along for the ride. So what’s the allure for the reporter?

“My Dinner with Hervé” has two flashback structures, one for each of its main characters. In Tate’s, drunkenness gets him estranged from his wife and toddler; in Villechaize’s, his insatiable desires for sex, booze and fame wriggle through re-creations of scenes from his roles as Nick Nack and Tattoo. In the  “Fantasy Island” sequences, we’re treated to an absolutely awful interpretation of Ricardo Montalban by Andy Garcia, one that’s as stiff as Khan’s fake chest in “Star Trek II: The Wrath of Khan.” Gervasi wants to draw parallels between these two characters, with Villechaize chastising Tate for not being forthcoming and honest about his transgressions, but any moral high ground is ceded when we discover that Villechaize is far from a reliable narrator. His manager Marty (David Strathairn, great in this small role) has to set the record straight for us.

Dornan’s one-note performance leaves much to be desired, but Dinklage is very, very good as Villechaize. He doesn’t look much like the actor, but nails the voice and finds some genuine pathos in his performance. You can feel his pain when he recalls how coldly his mother treated him, presumably because she blamed herself for his dwarfism. And we can infer that his undying need to please the public stems from this unresolved relationship, as in a memorable sequence at a car show, where Dinklage convinces us that Villechaize feels trapped by his role as Tattoo. Dinklage brings tragic yet defiant lyricism to his role that almost transcends the lackluster script. As a result, you stop caring about anything Tate is going through, yet the film keeps forcing him on us, mining suspense out of whether he’ll fall off the wagon or reconcile with his ex.

It's funny how “My Dinner with Hervé” blatantly tells on itself in an almost meta fashion. Tate’s editor demands an inconsequential “fluff piece” on Villechaize, and that’s what this movie is. She also tells Tate that his career has been saved solely by the tragic fate of his dinner partner, and this film ends callously on that idea. Tate’s a better man, and about to write a potential best-seller, because he’ll capitalize on having been in the right place at the right time on another man’s path to self-destruction. It’s a cold notion that “My Dinner with Hervé” dishonestly sees as a triumph for its least interesting character, underscored by a needle drop so obnoxiously on-the-nose that you’ll want to gnaw off the corners of your TV. 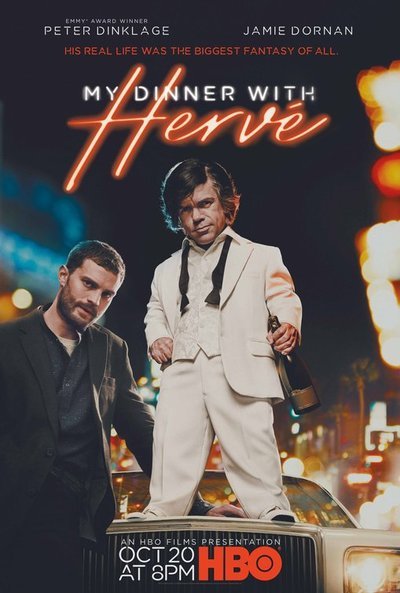 Mireille Enos as Kathy Self