The best Bond in years

In this 50th year of the James Bond series, with the dismal "Quantum of Solace" (2008) still in our minds, "Skyfall" triumphantly reinvents 007 in one of the best Bonds ever. This is a full-blooded, joyous, intelligent celebration of a beloved cultural icon, with Daniel Craig taking full possession of a role he earlier played well in "Casino Royale," not so well in "Quantum" -- although it may not have been entirely his fault. Or is it just that he's growing on me? I don't know what I expected. I don't know what I expected in Bond No. 23, but certainly not an experience this invigorating.

The movie's innovations begin in its first shots, which abandon the familiar stalking silhouettes in the iris lens, and hit the ground running. Bond and another agent are in Istanbul, chasing a man who has stolen a crucial hard drive, and after a chase through city streets (involving no less than three Fruit Cart Scenes), 007 is running on top of a train. We know from earlier films that Bond can operate almost anything, but "Skyfall" incredibly has him commandeer of a giant Caterpillar and continue the chase by crushing a flatcar filled with VW Beetles.

It's the kind of absurd stunt we expect in a Bond movie, but this one relies on something unexpected: a dead-serious M (Judi Dench), following the action from MI6 in London and making a fateful decision. After an enemy agent grabs Bond as a human shield, M's other agent, Eve (Naomie Harris), has both men in her gun sights. The stakes are very high. "Take the shot!" M commands. Bond seems to die, although since this happens around the 20-minute mark, we're not very surprised that he doesn't.

M begins to compose the obituary of Commander James Bond, and she might as well also be writing her own. Time has passed her by, she's older, and her new boss, Mallory (Ralph Fiennes), convenes a public (!) hearing requiring her to defend her tenure. It's time for a generation to be put out to pasture. Even Q and, as it turns out, Miss Moneypenny are practically kids.

M is not quite ready to retire, and "Skyfall" at last provides a role worthy of Judi Dench, one of the best actors of her generation. She is all but the co-star of the film, with a lot of screen time, poignant dialogue, and a character who is far more complex and sympathetic than we expect in this series. The film is guided by a considerable director (Sam Mendes), written by the heavyweights Neal Purvis, Robert Wade and John Logan, and delivers not only a terrific Bond but a terrific movie, period. If you haven't seen a 007 for years, this is the time to jump back in.

There's a theory that you can grade the Bonds on the quality of their villains. In "Skyfall," this is a cerebral megalomaniac named Silva, played by Javier Bardem, whose unpronounceable Anton Chigurh in "No Country for Old Men" approached the high-water mark of Hannibal Lecter. Here he plays a bleached blond computer whiz who stole the drive containing the guarded identities of every MI6 agent. Are we supposed to think of Julian Assange?

This is a brand-new Bond with love and respect for the old Bond. This is dramatized during Bond's visit to the weathered Scottish mansion inhabited by Kincade (Albert Finney), which has secrets to divulge and continues the movie's rewriting of the character's back story. During the early Bonds, did we ever even ask ourselves about 007's origins in life? "Skyfall" even produces a moment designed to inspire love in Bond fans: a reappearance of the Aston Martin DB5 from "Goldfinger," which remains in good operating condition.

Just as Christopher Nolan gave rebirth to the Batman movies in "The Dark Knight," here is James Bond lifted up, dusted off, set back on his feet and ready for another 50 years. And am I completely misguided when I expect to see Miss Moneypenny become a Bond girl in the next film?

I'm double-posting my review of "Skyfall" to encourage comments, which my main site can't accept.

To read or leave comments on this review, click here. 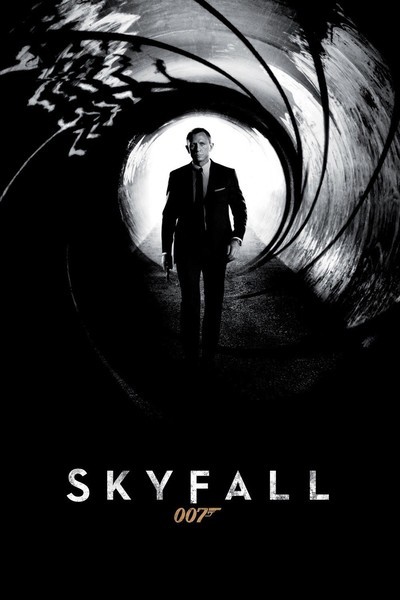 Rated PG-13 for intense violent sequences throughout, some sexuality, language and smoking