At the Oscars Without You: A Letter to Roger

Our grandson Mark-Taylor accompanied me to the Oscars, and I squeezed his hand way too hard when they flashed your photograph across the screen during the "In Memoriam" segment. (It was one of my favorite pictures of you.) They made an announcement admonishing the audience in the Dolby Theatre not to clap. I guess they wanted to prevent what has happened in the past, with some actors or directors being applauded wildly, while some lesser known people received little applause. They have a point; it is not a popularity contest. Or perhaps they just wanted to confer a solemn dignity on the proceedings. I don't know. All I know is that sometimes the audience didn't comply, like in the beginning with
Advertisement
James Gandolfini. I took note of the wayward applause for you, and it touched my heart. As did the standing ovation the audience gave for all who'd been lost over the last year. 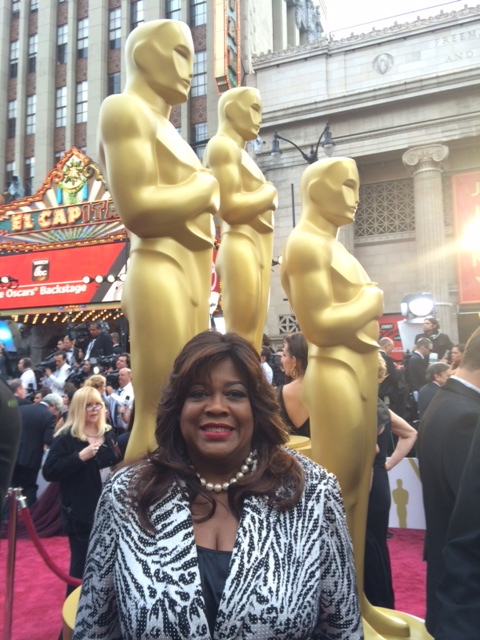 I was resolute in my determination not to cry when they showed your photo. And other than squeezing Taylor's hand, I pretty much lived up to that resolution. It occurred to me that this was the first time you'd been "seen" inside the theater proper during the broadcast of the Academy Awards. You were usually huddled in the press room with the other journalists writing on deadline. I always admired your work ethic. I thought the segment was over, and didn't count on the Academy programming Bette Midler on stage to sing her hit "The Wind Beneath My Wings" to close out In Memoriam. That is when my resolve went out the window.

"Did you ever know that you're my hero," Midler rang out so clear and beautifully. The tears flowed. Even before you became ill, you used to tell me that I was the wind beneath your wings, and I used to tell you that you were my hero. We sang that song together, goofing over the treacle-sweet nature of it, but loving it all the same. It was a good thing I was wearing waterproof mascara. Taylor, being the gentleman he is, offered me his handkerchief. Samuel L. Jackson patted me comfortingly on the shoulder. 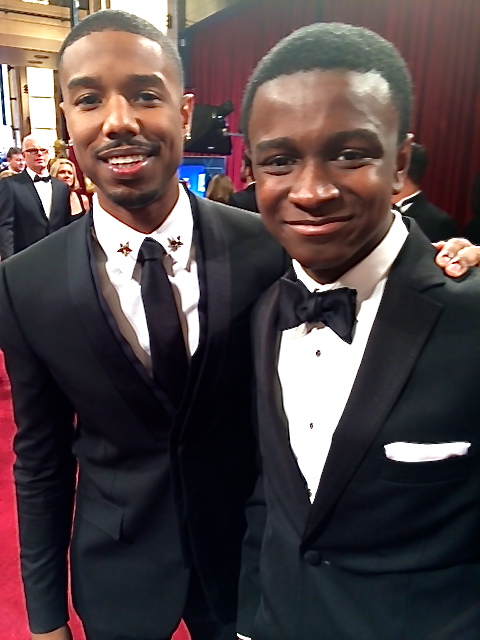 Ellen DeGeneres did a laudable job as the host again this year. She came across as warm, likable and really comfortable in her skin. Taylor thought she was hilarious, and he didn't share my view that the pizza bit was odd for an awards show being watched by millions around the world. He said it just made the show more spontaneous and inviting. I also questioned whether the pizza delivery guy was real or an actor. You can't spend that much time and money on a show and not know what was going to happen every moment. But here again, Taylor disagreed with me. He said Mr. Pizza was legit, and said the guy looked genuinely shocked and happy to find himself on stage looking at
Advertisement
Julia Roberts. I wonder if it is a generational thing, because I found myself more apprehensive about pizza sauce being splashed over someone's dress or on Matthew McConaughey's white tuxedo. Well, I guess it worked because people are still talking about it.

As a matter of fact, kudos to the producers, Neil Meron and Craig Zadan who put the show together. I absolutely loved the opening number with Pharrell Williams singing "Happy." That song makes me want to shout it is so joyous. I want to adopt it as my wake-up call to start my day. It is impossible to feel low when you hear that song and watch all the people clapping their hands and dancing with glee. The producers crushed it with all of the musical numbers this year, including "The Moon Song", U2 performing "Ordinary Love" and Idina Menzel's version of "Let It Go." I don't want to make a cheap joke about John Travolta calling her Adele Dazeem, especially if he is dyslexic. Nevertheless, I have to admit that for the first few seconds after he said her name my brain was saying, "Who is that?" And I adored Pink shimmering in her red flowing gown as she sang "Somewhere Over The Rainbow." But what do I know. A music teacher in Chicago told me that Pink's phrasing of that song drove her to distraction. We both agreed, however, on the uplifting nature of Darlene Love singing "His Eye Is On The Sparrow" when "20 Feet from Stardom" won the Documentary award. It is so much fun to see someone win who really, really appreciates it. 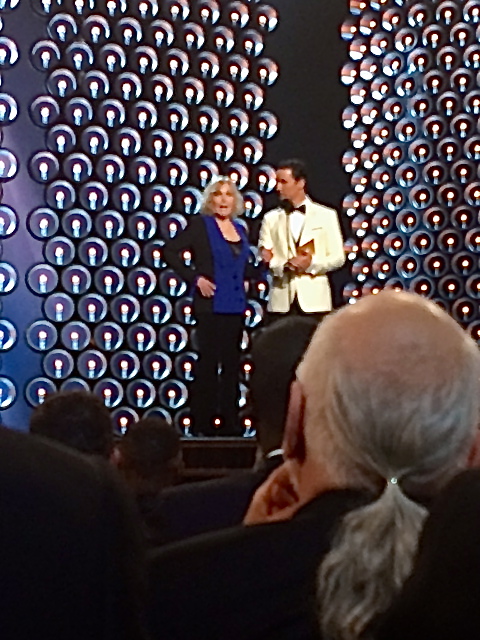 There was so much to admire about the show, from "12 Years a Slave" winning Best Picture, to Matthew McConaughey's homespun philosophy, to Lupita Nyong'o's gracious speech about loving and accepting who you are. She is so beautiful that I was surprised to learn that at one time she did not like her skin color. As an aside, when I was growing up in a family of nine children, we all thought our brother, Wiley, was the most handsome, precisely because he had the smoothest most radiantly dark hued skin. Congratulations to Cheryl Boone Isaacs, president of the Academy of Motion Pictures, Arts and Sciences, and her colleague Dawn Hudson and their staff for including more African American presenters this year. It is so insidious when you don't see someone like you achieving your dream. Taylor enjoyed meeting Joseph Gordon Levitt, who couldn't have been kinder. (See photo) But his favorite photo of the evening was the picture he took with actor Michael B. Jordan of "Fruitvale Station." It seems almost absurd to say this in 2014, but diversity in every aspect of society is paramount. The highest level of the entertainment industry is no exception.

The Actress and Supporting Actress categories were chock full of deserving nominations. I always think that Amy Adams is good, but in "American Hustle" she was transcendent. Her ability to sport that English accent to hustle her way into the big time playing against both Christian Bale and Bradley Cooper helped make that movie compulsively watchable. It's too bad she was up against Cate Blanchett. The same can be said for all of the nominees in that category. And I hope that Meryl Streep has a good sense of self to accept that she is the top reigning actress with 18 nominations, even if she has taken home only 3 gold statues. To have Judi Dench and Sandra Bullock round out that category is indeed an honor. Sometimes when they say it is an honor just to be nominated, they mean it. 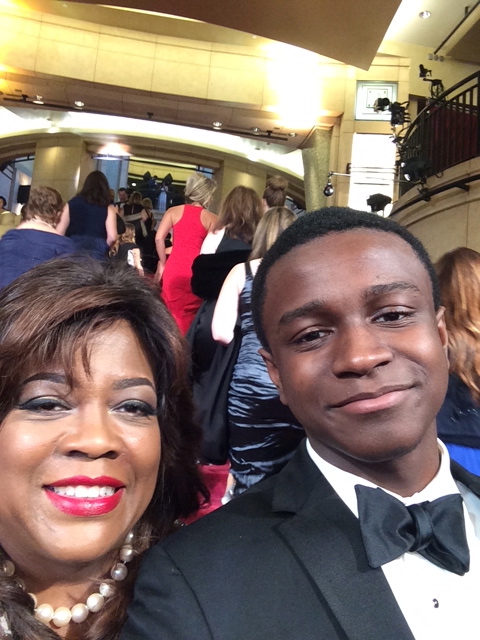 I felt that way about the Supporting Actress category, as well. Jennifer Lawrence, June Squibb, Julia Roberts and Sally Hawkins all gave star performances. But at the end of the day, Lupita's scene with Michael Fassbender, where she protests that she picks 500 pounds of cotton a day, gags at her own smell, and still has to endure beatings just makes my stomach tighten. The tears are swelling behind my eyelids even now as I write those words. That scene was simply powerful. She earned her Oscar.

I was surprised to read the next day that some writers thought the show went on too long. I guess I was having such a good time with Taylor that I didn't want it to end. You would have been proud of the teenaged Taylor for having the patience to enjoy the entire show. In years past he would have questioned all the hoopla about it. This year he saw more of the nominated movies, asked more questions and eagerly answered my inquiries about his opinions. As a consequence, he seemed to have thoroughly enjoyed the show. It helped that the Academy provided us great seats (seven rows from the stage and in the center.) Rather than going out during intermissions, Taylor and I were content to stand near our seats speaking with our neighboring seatmates including Samuel Jackson, Sony Pictures Classics studio co-president, Michael Barker (whom Cate Blanchett thanked when she won), director Steve McQueen and screenwriter John Ridley, who won for adapting the screenplay for "12 Years a Slave," producer Megan Ellison who financed "Her", all of the people associated with the movie "Nebraska," including producers Albert Berger and Ron Yerxa (whom you once famously mistook for David Lynch), and on and on. Later we realized we were seated just a row or two from the pizza and the selfie that was retweeted around the world. What more could we ask for. 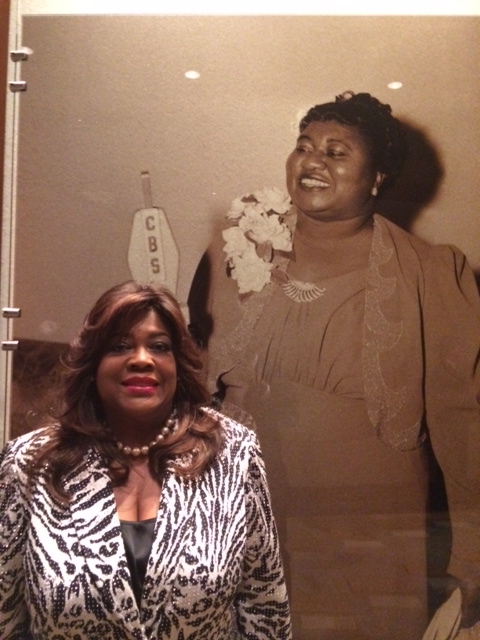 The day before the Oscars at the Independent Spirit Awards, I saw Anne Thompson taking photos to include in her column on Hollywood. I reminded her of the early days when you would take your own pictures leaving everyone puzzled about why you were doing that. Now, almost every journalist is expected to take pictures and post them on social media as well as populate their columns with them. Anne replied that you were always ahead of everyone.

Roger, I think you would have been surprised and gratified by a lot of things people were saying about you this past weekend. Gregory Nava wrote a beautiful essay about your contribution to the independent film community for the "In Memoriam" inside the Spirit Awards booklet. He said through your reviews you gave all of the mavericks an avenue to be seen and heard. He continued: "Before there was a Sundance, before there was a Film Independent or an IFP, there was Roger Ebert."

Brian Lowry of Variety wrote an entire column about how the pre-show has devolved into banality and fashion. He started the column by saying that among the many things we miss about you are the authority and genuine love of movies that you brought to the Oscar red carpet. For 46 years you exhibited a genuine love for cinema and your tireless devotion to writing about it and talking about it was noticed. I'd like to thank the Academy for recognizing your contributions. 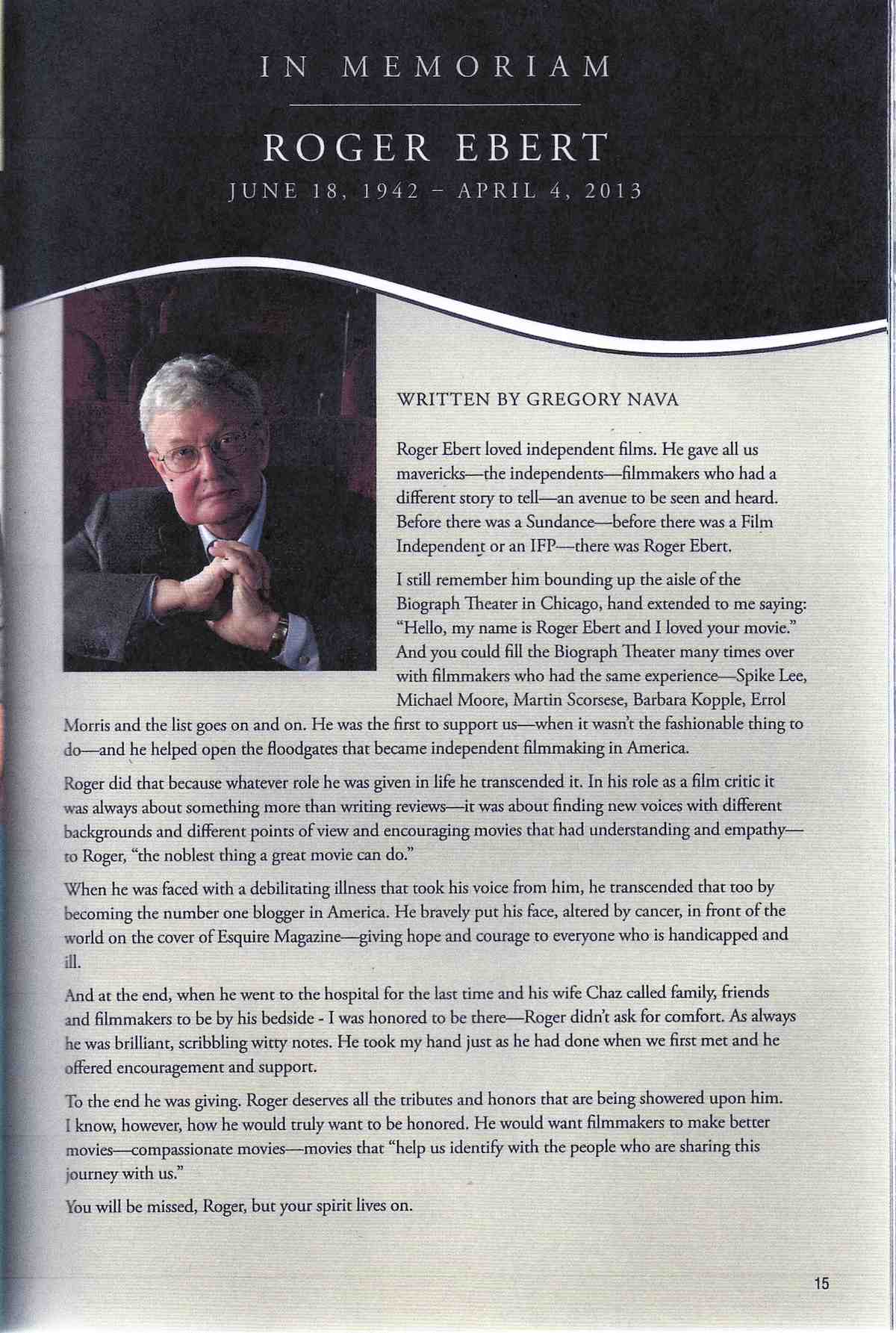 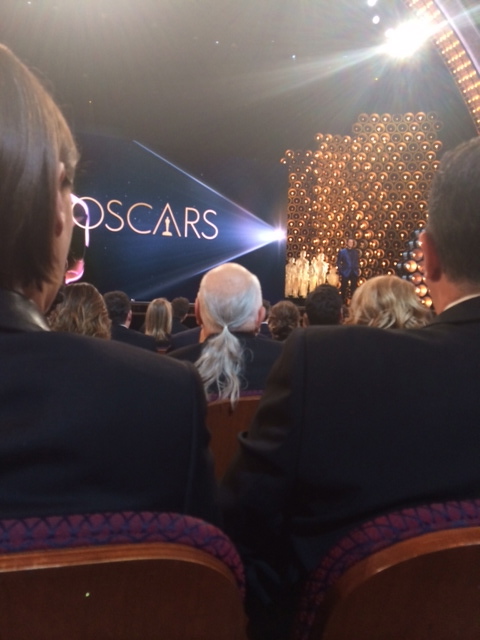 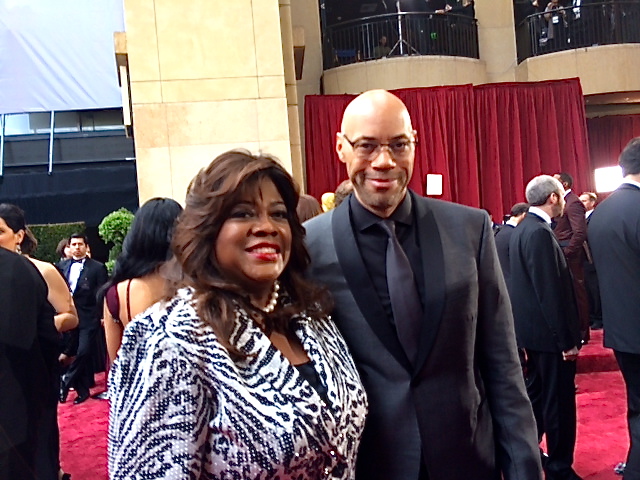 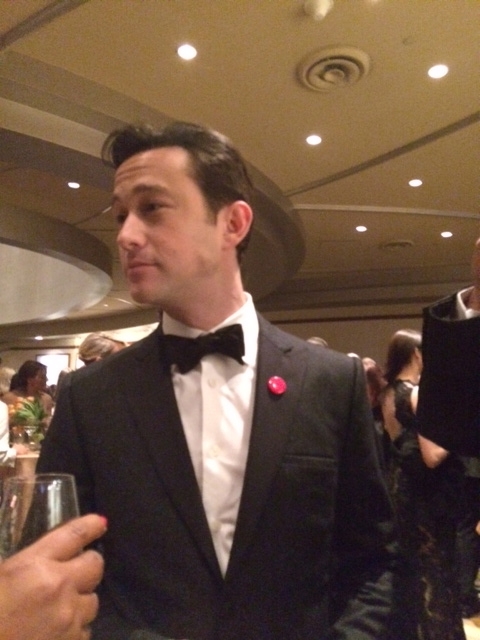 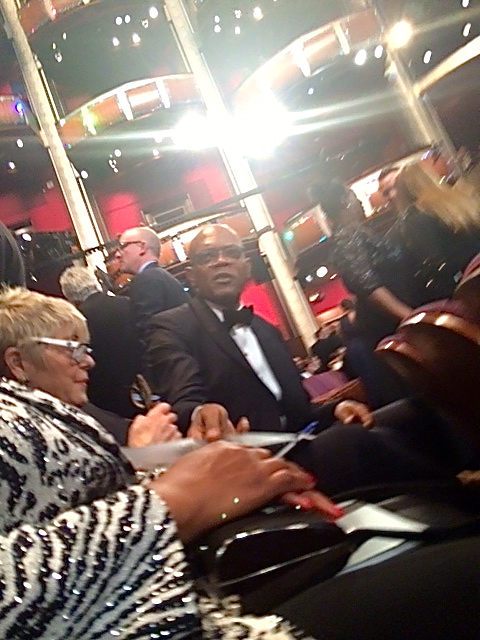