"Fruitvale Station" is about what we can imagine when we cast our gaze across the longstanding divides in this persistently, cancerously segregated American society. Like Paul Haggis' "Crash," it is an ambitious do-gooder project aimed at penetrating hardened hearts. Unlike "Crash," it has one solid, irrefutable piece of reality on which to anchor its fable-like teachable moments: The protagonist, Oscar Grant (the brilliant Michael B. Jordan), was a real 22-year-old man. The first thing we see in "Fruitvale" is the fatal moment that will lead to Oscar's death. Camera phone footage of Bay Area Rapid Transit cops beating Oscar and his friends on a subway platform ends with a gunshot.

The rest of the film dramatizes what Oscar was up to the day before he was killed, New Year's Eve 2009. I must paraphrase "The Elephant Man" to explain what it all amounts to: Oscar was not an animal. He was a human being. He had dreams and feelings. He cared for many people, and many people cared for him. His death left a giant crater in several lives.

For those of you who understand that young black men are humans, not beasts, it might sound like a silly project to undertake. But consider what pop culture gives us to go on. For every complicated, vulnerable, flawed but basically decent black male character or celebrity there are a hundred loud, imbecilic thugs. Ho'wood spent six decades emasculating and lobotomizing black male characters, then traded on some cheap, crime-based empowerment narratives via blaxploitation.

The past three decades were about depicting the refurbished, physically potent and powerful black man as a moral and intellectual weakling. When we did get a glimpse of black male intelligence, it tended to be the psychopathic "street smart" variety. The pop icons among rap artists, the ones who dine with the corporate elite, promote prison culture, ruthless self-interest and jewelry.

These images have fed racists, but they've also fed generations of black boys who learned that survival in a country that has little use for them means suppressing "soft" emotions and projecting a confidence that, in black skin, often comes off as arrogance. People who wanted to believe that blacks are inferior and black youth who took these images of aggressive inferiority as the underclass path to success joined hands to keep the dehumanization circus in business into the new century.

Judging by its haunted atmosphere, "Fruitvale Station" knows all that history, and knows better than to confront it, fret over it or wag its finger at it. Writer-director Ryan Coogler simply lets us sample Oscar's daily routine and pressures. We get so caught up in his world, there's little time to respond to the cultural cues that would indicate to a certain segment of the audience that they're dealing with what "Menace II Society" called "America's nightmare: young, black and don't give a fuck."

Oscar gives a fuck. He dresses like a homeboy and blasts his car stereo, but he is no thug. He's a father worrying about rent, bills and his daughter's schooling. He used to sell marijuana to get by, and losing his job at the local supermarket pushes him that much closer to dealing pot again. But he's been busted before, so another arrest could send him away from his daughter and her mother (the radiant Melonie Diaz) for a good while.

His explosive side stems more from the fact that he shares little of his mental burdens with anyone. At least the raging bull Jake LaMotta had the boxing ring. Oscar has few outlets, but his girlfriend and daughter and friends and family keep him "lifted up" — a term his mother (Octavia Spencer) uses when gathering them all to pray for Oscar to survive the bullet that pierced his lung.

"Fruitvale Station" reminded me of a social realist classic by Ken Loach ("Raining Stones," "The Wind that Shakes the Barley", "Land and Freedom"). Its volatile, deeply sensitive and charismatic protagonist is in the mold of Loach's working-class antiheroes. The only important differences are that Ryan Coogler's debut feature is set in the US, not the UK, and his hero is black. If these differences don't sound like much, try to imagine Trayvon Martin as a white kid. Would there be as many commentators speculating that Trayvon's attitude caused his own death at the hands of the man who stalked him with a gun? Or let's imagine the new cult classic, Nicholas Winding Refn's "Drive," with Michael K. Williams in the lead role as a stoic, brutally violent protector, instead of blond sex symbol Ryan Gosling.

In many ways, "Fruitvale Station" is as green and earnest as "Boyz N the Hood," a debut film made by another alumnus of Coogler's alma mater, USC: John Singleton. Yet its ambition is closer to that of the most important American indie film in at least a decade,  Patrick Wang's "In the Family," a must-see that's now available on DVD. It's about a gay father (played by Wang) who's cruelly separated from his son after his partner, the boy's biological father, dies. The film becomes something much grander than a woe-is-he political statement as Wang slowly, stealthily brings various strangers into the picture. These folks, inscrutable and potentially hostile at first, become the protagonist's passionate allies, revealing useful talents and resources we didn't expect. It's all because Wang's character draws them in with his sunny, embracing, fair-minded spirit.

It's the same spirit that Oscar brings to encounters with those who don't automatically write him off. The genius of Jordan's performance, and the sense of portent that Coogler builds around it, is in showing how aware Oscar was that his freedom and even his life could depend on overturning a superficial, unfair impression. 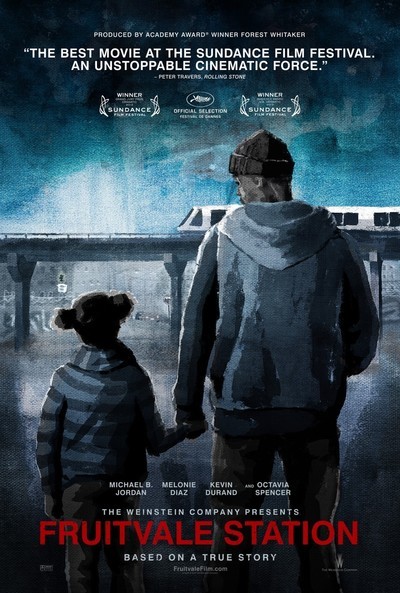 Michael B. Jordan as Oscar