David O. Russell out-Scorseses Martin Scorsese with "American Hustle," a '70s crime romp that's ridiculously entertaining in all the best ways. "American Hustle" is actually a more thrilling and satisfying experience than Scorsese's latest, the upcoming "The Wolf of Wall Street," which similarly was inspired by the true story of an irrepressible financial huckster. The unreliable narration and urgent zooms, the 1970s milieu of flashily dressed scammers and mobsters, the carefully chosen pop songs underscoring key emotional moments: all those recognizably Scorcesean signatures are there, yet Russell infuses them with his unique brand of insanity.

This director has always has shown a fondness for characters who are on the brink of imploding or exploding, and with "American Hustle" he's assembled his own posse of stars from his last two films to serve as his personal acting troupe: Christian Bale and Amy Adams from 2011's "The Fighter" and Bradley Cooper and Jennifer Lawrence from "Silver Linings Playbook." But he's so skilled with these actors (despite reports of his exhausting methods of motivation on set), he not only finds a side to them we haven't seen in his previous films, he finds a side we haven't seen, period.

Co-written with Eric Singer, Russell's latest is based on the Abscam sting operation of the late '70s and early '80s, in which a con artist helped the FBI catch members of Congress taking bribes. "Some of this actually happened," a title card playfully informs us at the film's start, before Russell introduces us to the glorious sight of Bale's paunchy Irving Rosenfeld plastering a horrendous hairpiece onto his shiny dome.  To play the swaggering Rosenfeld, the owner of a small chain of Long Island dry cleaners who makes his real money through fake art and fraudulent personal loans, Bale seemingly downed all that food he denied himself while shooting "The Machinist" and "Rescue Dawn."

He meets his match at a pool party in Adams' Sydney Prosser, a scrappy young woman from Albuquerque with dreams of reinventing herself in high style. It's Sydney's idea to don a fake accent and take on the alter ego of the posh Lady Edith, a Londoner with elite banking connections—and in doing so, she kicks Rosenfeld's cons into high gear. (While all the choices from costume designer Michael Wilkinson are spot-on in their tacky period allure, Adams' ensembles are to-die-for: a plunging and sparkling array of sexy little numbers that help the actress assert her untapped va-va-voominess.)

Irving and Sydney quickly become partners in crime and love—but wait. Irving has a young son, and a wife: Lawrence's needy, vulnerable and spectacularly passive-aggressive Rosalyn (Lawrence). With her fake tan, high hair and vicious nails, Rosalyn is a force of nature. She knows just enough to be dangerous, which may make her an even bigger threat to Irving and Sydney than the federal authorities who are closing in on their operation. Her complexity and unpredictability make her fascinating to watch—she's just unhinged enough to think she's the voice of reason—and Lawrence is a radiant scene-stealer. Regardless of genre, it seems there's nothing this actress can't do.

Cooper's Richie DiMaso is a hotheaded (and tightly permed) FBI agent who's eager to make a name for himself with a big bust. (Seriously, the hair is awful, almost as bad as Bale's; Russell even goes so far as to show Cooper wearing the itty-bitty curlers at the kitchen table. It's kind of adorable.) Richie exposes the lovers' scheme and forces them to help him net even bigger fish to get themselves out of trouble. But he also finds himself falling for the sexy Sydney—er, Lady Edith—and she may feel the same way. Or does she? Part of the fun of "American Hustle" is that it keeps us constantly on our toes wondering who's scamming whom.

Russell doesn't judge any of these people for their idiocy or their aspirations. He revels in their quirks and foibles. The fact that Rosalyn is constantly on the verge of burning the house down, for example, ends up being endearing in Russell's hands. (Microwave ovens aren't for everyone.) We even end up feeling sympathy for Jeremy Renner as crooked Camden, N.J., Mayor Carmine Polito. He's a criminal, too: He's on the take and coaxes more powerful politicians to join him, all in the name of rejuvenating Atlantic City. Yet Renner makes us feel this gregarious family man's generosity, and the bromance that forms between him and Bale's character is actually sweet.

Russell's film is big and big-hearted and more than a little messy, but that's apropos given the over-the-top characters, their insatiable greed and their brazen schemes. Sure, it looks like the cast went nuts at a Goodwill store and splurged on the grooviest duds they could find for an elaborate game of dress-up, but the clothes more than just a kitschy source of laughs: they're a reflection of their characters' ambition, a projection of their glittering notions of the American dream.

The film is probably also a tad overlong, but it's a blast to hang out with these people, and Russell creates such an infectiously zany vibe around them that if even you notice the running time, you probably won't mind. For all its brashness and big personality, "American Hustle" is a character study at its core—an exploration of dissatisfaction and drive, and the lengths to which we're willing to go for that elusive thing known as a better life. 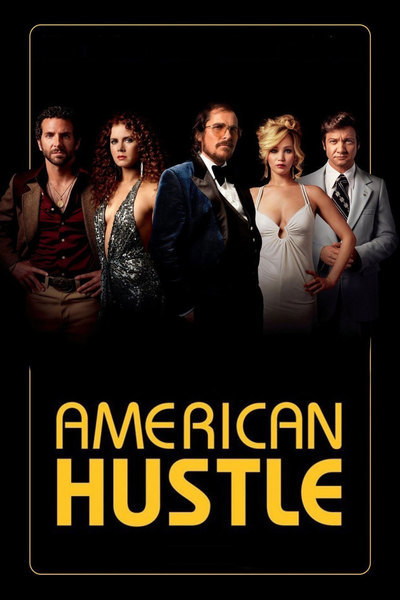