Spike Jonze's "Her" plays like a kind of miracle the first time around. Watching its opening shots of Joaquin Phoenix making an unabashed declaration of eternal love to an unseen soul mate is immediately disarming. The actor is so unaffected, so sincere, so drained of the tortured eccentricity that's a hallmark of most of the roles that he plays. It's like falling into a plush comforting embrace. Then one understands that the declaration isn't his, but something he, or rather, his character, Theodore, does for his job.

As the movie continues, and the viewer learns more of what an ordinary guy Theodore is—he checks his e-mail on the ride home from work, just like pretty much all of us these days—director Jonze, who also wrote the movie's script, constructs a beguiling cinematic world that also starts to embrace the viewer. The way Theodore's smart phone and its earpiece work is different from ours, and soon it becomes clear that "Her" is something of a science-fiction film, set in the not-too-distant but distinctly fantastic future. A big part of the movie's charm is just how thoroughly Jonze has imagined and constructed this future Los Angeles, from its smoggy skies to its glittering skyscrapers to its efficient mass transit system and much more. (There has already been, and there will no doubt be more, think pieces about how Caucasian this future L.A. is. There will likely be few think pieces about how the fashion for high-waisted pants in this future makes life unpleasant for the obese.)

The futuristic premise sets the stage for an unusual love story: one in which Theo, still highly damaged and sensitive over the breakup of his marriage ("I miss you," a friend tells him in a voice mail message; "Not the sad, mopey you. The old, fun you"), falls in love with the artificially intelligent operating system of his computer. The movie shows this product advertised and, presumably, bought in remarkable quantity, but focuses on Theo's interaction with his OS, which he gives a female voice. The female voice (portrayed beautifully by Scarlett Johansson) gives herself the name "Samantha" and soon Samantha is reorganizing Theo's files, making him laugh, and developing something like a human consciousness.

It's in Theo and Samantha's initial interaction that "Her" finds its most interesting, and troubling depths. Samantha, being, you know, a computer, has the ability to process data, and a hell of a lot of it, at a higher speed than human Theo. "I can understand how the limited perspective can look to the non-artificial mind," she playfully observes to Theo. And while Samantha's programming is designed to make her likable to Theo, her assimilation of humanity's tics soon have the operating system feeling emotion, or the simulation of it, and while the viewer is being beguiled by the peculiarities and particularities of Theo and Samantha's growing entanglement, he or she is also living through a crash course on the question of what it means to be human.

In the midst of the heavyosity, Jonze finds occasions for real comedy. At first Theo feels a little odd about his new "girlfriend," and then finds out that his pal Amy (Amy Adams) is getting caught up in a relationship with the OS left behind by her estranged husband. Throughout the movie, while never attempting the sweep of a satire, Jonze drops funny hints about what the existence of artificial intelligence in human society might affect that society. He also gets off some pretty good jokes concerning video games.

But he also creates moments of genuinely upsetting heartbreak, as in Theo's inability to understand what went wrong with his marriage to Catherine (Rooney Mara, quite wonderful in what could have been a problematic role) and their continuing inadvertent emotional laceration of each other at their sole "present" meeting in the movie.

This is all laid out with superb craft (the cinematography by Hoyte van Hoytema takes the understated tones he applied to 2011's "Tinker Tailor Soldier Spy" and adds a dreamy creamy quality to them, so that even the smog layering the Shanghai skyline that sometimes stands in for Los Angeles here has a vaguely enchanted quality) and imagination. If there's a "but," it's that the movie can sometimes seem a little too pleased with itself, its sincerity sometimes communicating a slightly holier-than-thou preciosity, like some of those one-page features that so cutely dot the literary magazine "The Believer." As in, you know, OF COURSE Theo plays the ukulele. And I'm still torn as to whether the idea of a business specializing in "Beautifully Handwritten Letters' is cutely twee or repellently cynical or some third thing that I might not find a turnoff. For all that, though, "Her" remains one of the most engaging and genuinely provocative movies you're likely to see this year, and definitely a challenging but not inapt date movie. 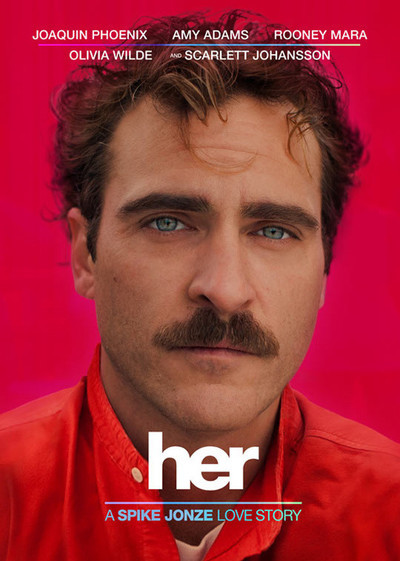