A key moment happens early on in "20 Feet from Stardom," a rousing and revelatory tribute that puts a much-deserved radiant face on those under-sung background singers that many of us have been humming along to for all these years.

Merry Clayton — whose banshee bellows of "rape, murder — it's just a shot away" during the chorus of the Rolling Stones' "Gimme Shelter" turned the 1969 album cut into a shiver-inducing anthem for the ages — takes director Morgan Neville to task for asking her to turn off the music in her car. As she sternly declares, "How can you logically have a diva not have her music on?"

Clearly, this is a lady who is not to be ignored and, lucky for us, Neville takes Clayton's words to heart. The music is on and then some throughout this smartly put-together documentary that celebrates the glorious harmonies achieved in the days before the pitch-tweaking of Auto-Tune yanked the very humanity out of the process.

No machine, and few solo acts, could come close to the natural-born abilities displayed by Clayton, 64, and her soulful sisterhood that includes powerhouse pioneer Darlene Love, 72; bluesy bombshell Claudia Lennear, apparently ageless since the number is nowhere to be found; delicate dynamo Lisa Fischer, 54; singular sensation Tata Vega, 61; and fresh-faced phenom Judith Hill, 29, who was foolishly kicked off the current season of "The Voice."

Yes, male performers show up on screen occasionally, including clips of the late Luther Vandross, who started out as a backup for the likes of David Bowie (following the tradition of British rockers who recruited such sessions singers to make them sound "blacker") before becoming an R&B legend in his own right.

However, the premier purveyors of this art form tend to be African-American women whose fathers were preachers. They honed their communal craft in the church choir where the goal was to blend rather than showboat. You can hear the gospel-bred tradition of call-and-response from the samples of their work on the film's vibrant soundtrack, from Ray Charles' "What I'd Say" and girl-group-era "He's a Rebel" to Donna Summers' "Bad Girls" and Michael Jackson's "Thriller."

But as uplifting as the music is, the film most benefits from the participants' abundant gifts as storytellers. They provide funny, frank and unabashedly emotional first-hand accounts of what it is like to be a supporting player to some of the greats in the business. Neville also convinced an impressive number of insightful icons to sing the praises of those hired to enhance their performance with little recognition, including Bruce Springsteen, Stevie Wonder, Bette Midler, Sting and Mick Jagger, whose camera-ready charm stands in stark contrast to the honest and raw presence of the movie's less lauded subjects.

For once, the spotlight shines on these brilliant women who spent most of their careers on the outskirts of fame with minimal fortune to show for their efforts.

Love is probably best known as the house singer for super producer Phil Spector, creator of the famous Wall of Sound. That aural edifice would have come tumbling down without her uncredited "ghosting" on the recordings supposedly done by The Crystals and others. Spector schemed to keep her under his thumb contractually, blocking her path to being a headliner. Desolate, she turned to being a housekeeper for a time before finding her place in the sun, the ultimate triumph being her induction into the Rock and Roll Hall of Fame in 2010.

Even more fascinating are those who attempted to break out on their own, only to stumble due to circumstances beyond their control more than anything else.

Lennear, the Amazonian inspiration for the Stones' "Brown Sugar," paid her dues as an Ikette while aping Tina Turner's provocative stage moves (Or, as Lennear puts it, "We were R&B's first action figures"). Now a Spanish teacher, she expresses shock over the provocative nature of the act — until Neville reminds her that she did a rather infamous Playboy spread back in the day. This sultry siren had the right stuff to turn Jagger's head, but her much-praised 1973 solo album appropriately titled "Phew!" failed to turn on record buyers.

After suffering the indignity of performing the songs off-camera for Margaret Avery's Shug in 1985's "The Color Purple," Vega was left in the shadows as the actress earned an Oscar nomination (something not noted in "20 Feet") for the role. She, too, saw her solo albums make only minor ripples in the '70s and '80s. Still, this busy backup — who has worked with Chaka Khan, Michael Jackson, Madonna and Elton John — is reconciled to her lower-profile fate, noting that if she had achieved major success, she might have OD'd like so many of her peers.

Fischer, who won a Grammy for her 1991 single "How Can I Ease the Pain" off her debut album "So Intense," seems to exist on a higher, purer plane than the rest judging from the awe expressed by the famous folk who have benefited from her vocals, especially Sting ("She's a star," he proclaims) and Jagger. Still, a follow-up album took too long to capitalize on her initial splash and, judging from her genteel demeanor, she doesn't seem comfortable with self-promotion. Instead, Fischer can take some pride in the fact that she has gone on every Stones tour since 1989.

Neville, who is a background presence himself in "20 Feet," has a knack for drawing out revelations from the women, especially Clayton. Her detail-filled anecdote about the late-night call she received to record "Gimme Shelter" in a studio is almost as chilling as her performance. She arrived pregnant, hair in curlers and wrapped in a Chanel scarf, with silk pajamas covered by a mink coat. They assigned her those harrowing, violent lyrics, which confounded Clayton. But she did her job and then some. When she asked for a second take, Clayton says what she really thought was, "I'm gonna blow them out of this room."

Later, when Neville plays an isolated portion of her four-decade-old track for an astonished-anew Jagger — a scene that often earns movie audience applause — Clayton certainly blows the roof off this fabulous documentary. 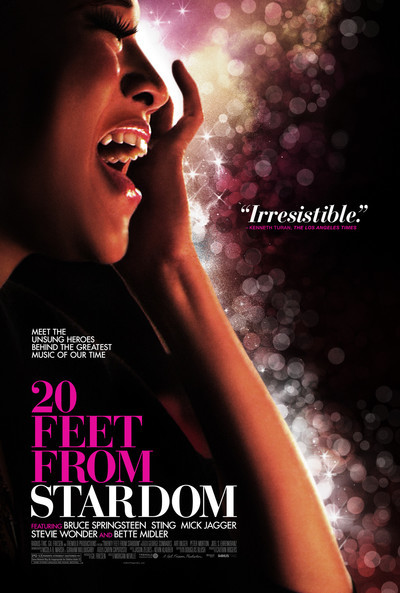 Darlene Love as Herself

Patti Austin as Herself

Merry Clayton as Herself

Lisa Fischer as Herself

Bette Midler as Herself

Mick Jagger as Himself

Sheryl Crow as Herself

Stevie Wonder as Himself

Chris Botti as Himself