I wouldn’t have picked Chris Hemsworth as Marvel's breakout comedy star when he was first cast as Thor, God of Thunder, but he turned out to be one of the best things about this never-ending mega-franchise. He’s tall, brawny and impossibly handsome, but there’s a self-mocking twinkle in his eye. When Thor is in gung-ho jock mode, Hemsworth’s wry machismo evokes the young Sean Connery as James Bond, raising an eyebrow at the corniness around him. When he bumbles and stumbles, there’s a touch of Cary Grant to his embarrassment. And when he’s playing things more or less straight, there’s an average guyness to his reactions. All this humanizes an actor who’s perpetually at risk of being treated as a life-sized action figure.

Hemsworth’s charisma holds “Thor: Ragnarok” together whenever it threatens to spin apart, which unfortunately is often. Written by Eric Pearson, Craig Kyle and Christopher Yost and directed by Taika Waititi (“Hunt for the Wilderpeople,” “What We Do in the Shadows”), this is almost but not quite a stand-alone picture, tethered to previous “Avengers” entries only by Thor’s opening search for the Infinity Stones, which has led him to be imprisoned by the fire demon Sutur. The demon tells him that his father Odin (Anthony Hopkins) is no longer on Asgard and that their homeworld will soon be destroyed in Ragnarok, a prophesied apocalypse. After that, the film splits into a couple of parallel narratives.

Fully half the film is a court intrigue/war picture, charting the takeover of Asgard by Thor’s long lost sister Hela (Cate Blanchett), a black-clad force of nature who seems to turn into a demonic stag-beast when she fights: her head sprouts elegant antlers that might have been sketched in the air with a brush dipped in India ink. The other “Thor: Ragnarok” is a largely comedic gladiator movie with prison thriller accents: Thor is trapped on the planet Sakaar, where he’s forced to fight the planet’s reigning champion, the Hulk (Mark Ruffalo). As revealed in trailers, Tom Hiddleston’s Loki is back, too—and why wouldn’t he be? He’s easily the most entertaining villain, or antihero, in the franchise, so beguiling that when Thor inevitably succumbs to his charisma and fights alongside him, both he and the audience momentarily forget how much death and property destruction he’s caused in prior chapters.

The overqualified supporting cast does a lot with not-quite enough. Sakaar’s “Grandmaster” is Jeff Goldblum, who gives exactly the sort of performance you’d want Jeff Goldblum to give in a project like this: intellectually detached, droll and smart-alecky, yet also somehow petty, arbitrary and sadistic. Goldblum's unique genius is his ability to toss off lines that might've seemed as overripe as week-old avocados on the page, like, "Let's have a hand for all of our undercard competitors who died so gruesomely." (From the inventive way he adds "ums" and "ahhs," you can tell that he's also a jazz musician.) The worst thing I can say about him is that he’s more appealing here than well-used. Either there should have been a lot more of him—though not at the expense of Blanchett, who’s a slinky hoot—or his efforts should’ve been more finely shaped by the filmmakers, so that his brilliance cohered into a bona fide character or else pushed on towards toward Dadaist madness, like Tim Curry as Dr. Frank N. Furter in "The Rocky Horror Picture Show" or the late Gene Wilder’s title performance in “Willy Wonka and the Chocolate Factory.” (The latter seems to have been what Waititi and company were going for in casting Goldblum: when Thor is introduced to Sakaar, “Pure Imagination” plays on the soundtrack.)

As Valkyrie, an alcoholic bounty hunter who once fought against Hela and now works for The Grandmaster, Tessa Thompson more than holds her own in scenes opposite Hiddleston, Hemsworth and Ruffalo. She's hard-boiled, like a tough dame in a 1940s detective film spitting wisecracks. As Skurge, a warrior who survives Hela’s destructive takeover of Asgard and joins her in order to survive, “Lord of the Rings” star Karl Urban captures the unhappiness of a  sellout who knows he’s better than the life he’s expediently chosen; but so much of his performance is reduced to anguished reaction shots that you may wonder—as you might with Thompson—whether the best bits got cut for pacing.

In the run-up to release, much was made of the allegedly drastic shift in tone that would make this project unique. It was sold as a light, funky, largely comedic effort—practically a spoof of Marvel’s usual, with Thor and the Hulk serving as the anchor of, basically, a buddy movie, like the kind  Bob Hope and Bing Crosby used to churn out. There are times when it gets close to that promised film, and when it hits pay dirt, it is delightful—particularly during very broad slapstick moments, as when Hulk enters the arena and Thor laughs with relief and announces, “I know him—he's a friend from work!”; and in moments of relatively subdued character development, as when Thor and Hulk commiserate in private and we learn that the big green guy loves it on Sakaar because the people treat him as an athletic superstar and folk hero, in contrast to the pariah treatment he gets back on Earth. (When you’re mainly good at Hulk Smash, it’s a relief to land a job that asks you to do nothing but.)

When Hulk turns back into Bruce Banner, Ruffalo reminds us that he’s giving two performances here, both superb. He revels in the looming physicality of Hulk—a motion capture performance on par with Andy Serkis’ best—but when he turns back into a regular man, he seems to shrink within himself. He’s unafraid to use his shortness for laughs, appearing side-by-side against the towering Hemsworth in wide shots like the superhero answer to Laurel and Hardy. Banner’s complaints are small, too—and yet they aren’t, because of their recognizable humanity: “You’re just using me to get to Hulk,” he whines. “It’s gross. You’re a bad friend.”

Unfortunately, as is often the case with Marvel films, the adventurous aspects aren’t adventurous enough, and the more predictable aspects—the CGI-saturated fight scenes, with bodies whirling through the air; the wide shots of cities burning and giant creatures on the rampage; the images of whooshing, twisting star gates and bodies falling from the sky like meteors—are more frenzied and loud than inspired, and eventually become monotonous. The movie's final third, yet another Marvel Big Battle, is as tedious as the first two-thirds are endearing. There's a whiff of post-colonialist critique in the presentation of Asgard as an empire that was founded on war but that now hypocritically congratulates itself for being peaceful, but the screenplay doesn't develop the idea as well as it might. A climactic twist, which I won’t reveal here, is presented in such a tonally inappropriate way that it calls the film’s entire approach into question. (“Ant-Man”’s status as the best off-brand MCU film remains unchallenged.) Only the comic chemistry of the main quadrangle—Hemsworth, Hiddleston, Thompson and Ruffalo—prevents “Thor: Ragnarok” from devolving into another standard-issue superhero crash-and-bash fest.

Still, there’s plenty to like here. Waititi, his cinematographer Javier Aguirresarobe (“Blue Jasmine”), and his production designer Dan Hennah take their cues from pop art-influenced comic book adaptations of the ‘60s and ‘70s, like TV’s “Batman,” “Logan’s Run,” “Flash Gordon” and “The Black Hole,” filling the screen with kitschy costumes, furniture, artifacts and machinery envisioned in the tiled, knobby style of the late, great illustrator Jack Kirby, and presenting it all in oversaturated color. The disco-drug-trip gaudiness is a welcome change of pace from superhero cinema’s default bled-by-leeches look. At one point, Thor gripes about the red-and-white patterning of the capital city's interiors, as well he should: they’re hideous. Mark Mothersbaugh, the onetime Devo co-founder and composer who scored four Wes Anderson films, creates a retro-synth soundtrack suited to the era of science fiction cinema in which characters wore jumpsuits. This is a close-but-no-cigar movie, but so enjoyable for the most part, and so modest in its aims, that its disappointments aren’t devastating. I’d watch the first 90 minutes again anytime. 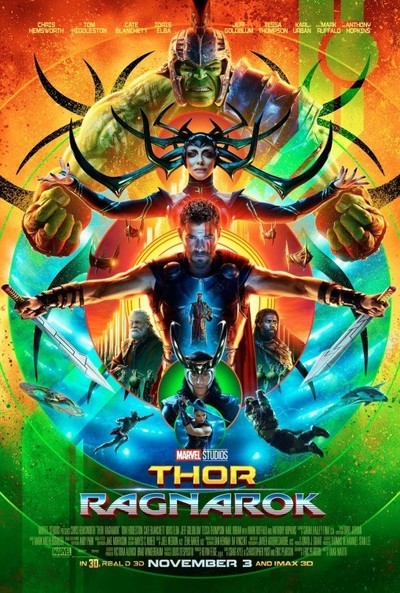 Jeff Goldblum as The Grandmaster

Karl Urban as Skurge / The Executioner

Writer (based on the comics by)