Not since "Infra-Man" has a movie opened with a development more ominous than the crisis facing Earth at the beginning of "Flash Gordon." But Earth scientists are playing it cool: A NASA spokesman denies that there's anything unusual about an unexpected total eclipse of the sun. Unusual? That the moon is out of its orbit? Ha! It takes a mad scientist like Dr. Hans Zarkov to realize that the Earth is under attack, and speed to the rescue in his private space ship-with Flash Gordon and Dale Arden aboard as unwilling passengers.

If memory serves, this is more or less the same beginning as in the original movie serialization of "Flash Gordon," back in 1936. Even if it's not, this new Dino De Laurentiis production is true to the tacky pop origins of the Flash Gordon comic strip and the serials starring Buster Crabbe. At a time when "Star Wars" and its spin-offs have inspired special effects men to bust a gut making their interplanetary adventures look real, "Flash Gordon" is cheerfully willing to look as phony as it is.

I DON'T mean that as a criticism. You can make a city float in the clouds and look marginally realistic (as in "The Empire Strikes Back"), but there's something sort of fun about the "Flash Gordon" city that floats in the clouds and looks like a large miniature model floating in fake clouds. And as the spaceships lumber past on the screen, I really wouldn't have minded if they'd left a tube of model airplane glue lying in the lower left-hand corner.

"Flash Gordon" is played for laughs, and wisely so. It is no more sophisticated than the comic strip it's based on, and that takes the curse off of material that was old before it was born. This is space opera, a genre invented by Edgar Rice Burroughs and Hugo Gernsback and other men of unlimited imagination harnessed to definitely limited skills. It's fun to see it done with energy and love and without the pseudo-meaningful apparatus of the Force and Trekkie Power.

The plot is simple: The Emperor Ming (Max von Sydow), bored with life in the universe, decides to pick on Earth. After warming up with a few hurricanes and earthquakes, he sends the moon spinning down toward the planet. Meanwhile, Zarkov, Flash (Sam J. Jones, last seen as Bo Derek's husband in "10") and Dale (Melody Anderson) crash-land in Ming's imperial space city. There are intrigues afoot, but meanwhile Dale catches Ming's eye, he determines to marry her, and Flash finds himself fighting for his life with a gladiator.

Mike Hodges, the British director hired by De Laurentiis to orchestrate this comic space opera, is true to the visual tradition Of the, original serials: Everyone is dressed in capes and ridiculous boots and headdresses, and stand, around on the command decks of ornate space ships. There's an imperial court to applaud and boo at the appropriate times.

And there's a cliff-hanging showdown when the Hawk Men, looking amazingly like the winged angels in De Laurentiis' production as "Barbarella" (1968), engage the crew of a space ship in hand-to-hand battle (you know there's something lacking with the Ming technology when the commander of the rocket ship shouts "Stand by to the repel invaders!"). Is all of this ridiculous? Of course. Is it fun? Yeah, sort of, it is. 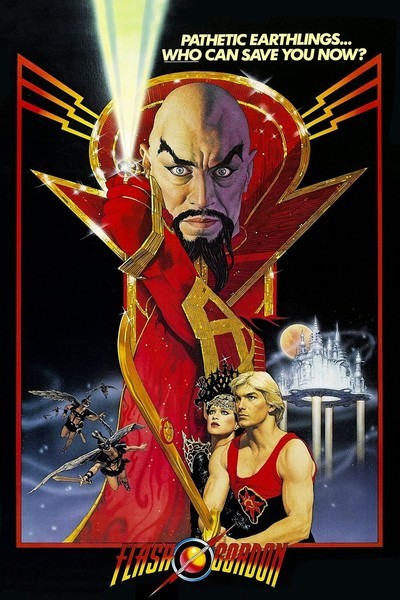