Sometimes “lightweight” isn’t a pejorative. “Ant-Man,” the comics-based superhero movie that’s centered around one of the more arguably goofy Marvel Comics characters (first prize has to go to a guy named Paste Pot Pete—and don’t ask) achieves its particular magic by keeping its proceedings almost as weightless as its shrunken-down hero. The movie, directed by Peyton Reed (“Down With Love,” “Bring It On”) and starring Paul Rudd, isn’t exactly or entirely fluffy, but it’s pretty damn agile, and as a result provides the most pure, uncomplicated fun, and even joy, of any Marvel picture I’ve seen.

The movie opens in 1989, with a digitally de-aged Michael Douglas strolling into an intelligence-gathering fortress and facing down some powerful frenemies, among them Tony Stark’s dad (John Slattery), a still-lovely-in-middle-age Peggy Carter (“Agent Carter” to “Captain America” and TV fans) and new sneery dude Mitchell Carson (Martin Donovan). Douglas’ character, Hank Pym, has a red vial containing something called “the Pym particle,” and SHIELD wants it, and Carson’s pretty insistent on the point. It doesn’t end well. This appetizer of backstory sets up not only the narrative for this picture, but serves as the equivalent of, um, nation building for the larger conceptual continuity of the MCU, which will be providing the entirety of the United States’ entertainment content, if all goes according to plan, by the year 2025.

The good news is that your enjoyment of this movie won’t be reliant on your getting various in-jokes and character references, even though there are a fair number of them. What the movie delivers for most of its running time is a surprisingly disarming amalgam of “The Incredible Shrinking Man” and “Rififi” by way of Brian De Palma’s first “Mission Impossible” movie, except with Jules Dassin’s goofball element thrown back in the mix. Short version: The “Pym particle” makes the tiny-but-powerful Ant-Man suit operable; in the present day Hank’s too old to work it and too protective of his steely daughter Hope (Evangeline Lilly) to permit her to put it on. So Hank elaborately recruits newly-sprung-from-prison hacker/cat-burglar Scott Lang (Paul Rudd) for a “job.” Said job involves putting a stop to megalomaniacal Darren Cross (a shiny-headed and deliberately-atrociously-outfitted Corey Stoll). Cross is an old protégé of Pym’s, a current employer of Hope’s, and he’s about to make a multi-billion-dollar killing on a weaponized “Yellowjacket” suit that pilfers Pym’s technology.

The stakes are high here, but they’re not as grandiose as they are in most contemporary comic-book-based movies, where the fate of the entire world if not the universe seems to be at stake every time. Yeah, Cross IS a lunatic (messing with the sort of atom-manipulation that makes these suits work can mess with your mind), and he does want to make an army of Yellowjackets, and his buyer, represented by the aforementioned Mitchell Carson, is none other than an outfit called HYDRA. But this movie doesn’t need to destroy whole cities to get its job done. Savvy, wise-cracking Scott wants to make it in the “straight” world so he can have more time with his daughter. The fact that his ex-wife now lives with a defensive cop (Bobby Cannavale) adds not just emotional dad-rival complications, but some plot twists as well. And after Cross smells some kind of rat in his system (it’s not a rat, incidentally, just a whole bunch of telepathically controlled ants), Scott’s lovable knucklehead criminal buddies—portrayed in varying shades of hilarity by Michael Peña, T.I. and David Dastmalchian—are obliged to get in on the action as well.

This is a lot of material for any movie to juggle, and it’s also competing with a crazy visual-effects element; the different sizes of Ant-Man bring with them different worlds, and his interaction with ants has a crazy pop-art surreality, like a pulp reiteration of Dali’s imagery in “The Persistence of Memory” and other insect-packed artworks. The script is credited to Edgar Wright and Joe Cornish, and then to Rudd and Adam McKay. Wright was originally set to direct, and while I’m not one to play pick-the-authorial touches (especially after only one viewing), I suspect quite a few of the visual gags in this picture originated with his contributions. In any event, the movie Reed has directed offers a remarkably direct through-line; I kept waiting, in dread, for a flashback explaining how the villain got that way, but it never came; instead, we find out what we need to know via dialogue and action, which is very welcome. Despite the movie’s buoyancy, it manages to convey Cross’s villainy and its gravity with an appropriate tone. It’s delightful and almost miraculous the way this movie manages to work as a comic heist picture on a huge scale, and with a comic science-fiction picture blended into it…while managing to cohere to the whole, you know, Marvel thing. Even the usually dreaded training-montage sequence manages to unfold like a compelling dance number. Part of it has to do with the novelty of the training—it’s not many movies that show its protagonist attempting to leap through a keyhole, or get a group of ants to pile sugar cubes into a cup of tea—but it’s also the character work from Rudd, Lilly and Douglas. Also nifty is the size-matters humor the movie works so deftly and unpredictably—there’s an iPhone-centered joke in the middle of a ridiculous (in a good way) climactic action sequence that’s devilishly clever. As is customary with Marvel films, “Ant-Man” has more than one ending—more than two, as it happens. My favorite was the second one, which will probably please thinkpiece writers and/or Evangeline Lilly fans, so I’m sure you’ll hear about it soon. As for myself, I found myself grinning a bit at the final promise “Ant-Man Will Return.” 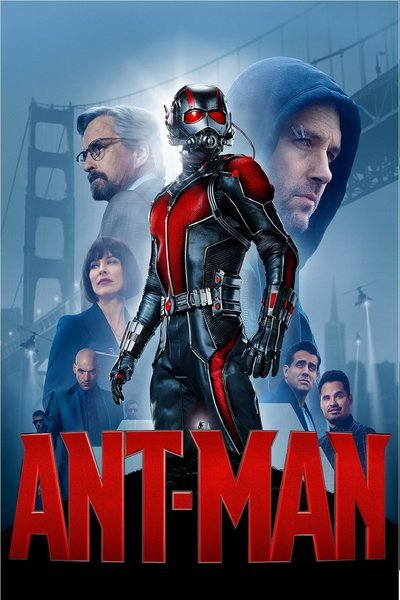