Is there a filmmaker whose work speaks for itself more completely than Steven Spielberg’s? Arguably the most popular director of the last half-century, his output doesn’t exactly scream out for reappraisal (because, well, we’ve all appraised it pretty highly already). So if the purpose of “Spielberg,” premiering Saturday on HBO, isn’t to shine new light on an under-lit career, what is it? For well over two hours (it’s almost as long as “Blade Runner 2049”), Susan Lacy and her team tackle one of the most beloved and successful careers in the history of film, hitting most of the expected way stations along the trail. It’s undeniable that Steven Spielberg changed film history, and I’m actually of the minority belief that some of his 21st century output stands among the best of his career ("A.I. Artificial Intelligence," "Minority Report," "Munich," "Lincoln," "Bridge of Spies"). I’m of the age that it would be difficult not to be a huge fan of his seminal work, and consider “Jaws” and “Raiders of the Lost Ark” desert-island films. However, “Spielberg” crosses the line into hagiography regularly and with reckless abandon. Given how much I adore his films and respect him as an artist, if this felt like fan service to me, those of you with less tolerance for his work should probably skip it.

For the majority of its running time, “Spielberg” moves chronologically. In fact, it’s at its most interesting when it chooses not to apply that rigid structure, occasionally spinning off into tangents such as how Spielberg works with fear, his focus on father-son relationships, and his interesting recent role as one of cinema’s most interesting historians. Spielberg’s films are so well-known that stories about their power or value feel repetitive. “Jaws” is terrifying, “Close Encounters of the Third Kind” is ambitious, “Schindler’s List” is personal and powerful—we know all that. But when Lacy starts to tie thematic ribbons around multiple films in Spielberg’s career, her work has more power, especially when the filmmaker himself is open and willing to speak out how his relationship with his father influenced that thematic undercurrent in his work. There’s just enough of those insights to make “Spielberg” valuable—I just wish there were enough to make it great.

For too much of “Spielberg,” we’re treated to rapturous praise of the title subject. David Edelstein says that “Right off the bat it was clear that no one moved a camera like Steven Spielberg,” and it’s hyperbole like this that makes the film feel superficial. How did he move his camera differently than anyone else? The film eventually gets at the idea that Spielberg has a rare gift for blending spontaneity with precise camerawork and technology, but it’s buried in an anecdotes and rapturous praise. On that note, Lacy did get nearly everyone to sit down for an interview so the star power of “Spielberg” is incredible. Richard Dreyfuss talks “Jaws,” Harrison Ford talks “Indiana Jones,” Daniel Day-Lewis talks “Lincoln,” Liam Neeson & Ben Kingsley talk “Schindler’s List,” Leonardo DiCaprio talks “Catch Me If You Can,” Tom Hanks talks “Saving Private Ryan,” and many more. It’s clear that the people who have worked with Steven Spielberg admire the time they spent with him just by their eagerness to participate in the film about him. And even Spielberg’s famous friends pop up, including Martin Scorsese, Francis Ford Coppola, George Lucas, John Williams, and many more.

As with any lengthy Hollywood career, there are a few oversights, although not as many as most director documentaries given the exorbitant length of this one (I get skipping “Hook” and “Always” entirely, but in 142 minutes, we couldn’t find space to discuss “A.I. Artificial Intelligence” outside of a few clips in montages? For shame.) What I will say about “Spielberg” is that it devotes time to what fans will want to see and hear—the greatest hits of a great career. It made me want to dig in and watch a few of the films I haven’t seen recently, especially the underrated “Munich,” and that’s to this film’s credit—"Spielberg" is fan service that reasonably satisfies those already in the club and encourages you to re-up your membership.

We had “De Palma” last year and now “Spielberg” this year. This director-doc trend isn’t going to go away as filmmakers who grew up on the artists of the ‘70s and ‘80s essentially pay homage to their icons. I look forward to the inevitable "Cronenberg," “Soderbergh” and "Mann." Until then, “Spielberg” will make movie lovers happy, or, more accurately, just remind them how happy its subject made them in the past. 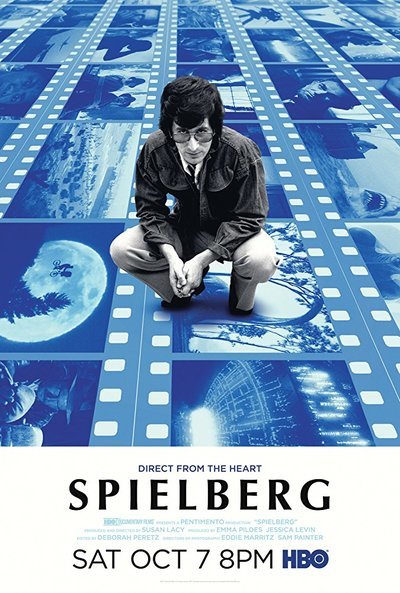