Last Days in the Desert

Yes, there is a new blue-eyed Jesus in town, the latest in a long line that includes Jeffrey Hunter (“King of Kings”), Max von Sydow (“The Greatest Story Ever Told”) and Willem Dafoe (“The Last Temptation of Christ”).

In these days of heightened sensitivity to race when it comes to casting, some might take exception to this creaky tradition that lives on in the form of Scottish—born Ewan McGregor in “Last Days in the Desert.” Why not an actor of Middle Eastern descent? Because just as the Lord made the stars to be gazed upon, so does Hollywood. And a religious parable, especially one that is this quietly bold in its understated rebellion against bloated self-important Biblical epics (we mean you, “Noah” and “Exodus: Gods and Kings”) benefits from offering a familiar face to beckon both believers and non-believers into theater seats.

Thankfully, “Last Days in the Desert” offers much more edifying food for thought than just its choice of a leading man.

Save for the flimsy sandals and ragged robes worn by the handful of other actors who eventually appear alongside McGregor, whose spiritual presence here recalls his version of Obi-Wan Kenobi, there is little else that feels ancient. Instead, this is a refreshingly stripped-down rendering of how a humble holy man named Yeshua (Jesus in Hebrew) spent 40 days in the desert praying, fasting and asking for guidance. We might know that a crucifixion will follow, but he is not as well-informed.

Director and writer Rodrigo Garcia assembles his fable in accessible-to-the-masses fashion. Instead of stilted Gospel-verse English, the relaxed everyday dialogue will likely please contemporary ears. As for the presumed Messiah before us, this scruffy solitary seeker doesn’t seem all that remarkable. He is thirsty, a bit disoriented from lack of food and more than a little lonely and adrift. That he has a large capacity for kindness, caring and selflessness just makes him an exceptional human. However, there is that brief moment where he levitates above the ground.

Yeshua is somewhat puzzled about his current status. He implores, “Father, where are you?” and “Father, speak to me!” before yelling with frustration into the wind. But the only voice he hears comes from a demon who regularly materializes next to him as his mirror twin, save for a raffish earring dangling from his left ear. The devil taunts him and tries to plant doubts in his mind while declaring that God has many children but He loves only Himself. But the holy man steadfastly refuses to give into whatever temptations the foul fiend tosses in his path.

Is it wrong to perhaps prefer the very good McGregor as the rascally devil (who is reminiscent of his “Trainspotting” hell-raiser) than his good-natured human guise? After all, he gets the best line: “I’m a liar … and that’s the truth!”

“Last Days in the Desert" soon expands into a meditation on such themes as fathers and sons, family responsibilities, trust, destiny and death when Yeshua comes upon a family consisting of an agitated patriarch (Irish actor Ciaran Hinds) who works as a stone cutter, his ailing, much-younger wife (Israeli actress Ayelet Zurer) and their itching-to-roam teenage son (Tye Sheridan, who previously impressed in “The Tree of Life” and “Mud,” and is the young Cyclops in the upcoming “X-Men: Apocalypse”). They take in the holy man, giving him water and shelter although he refuses food. He patiently listens to the yearnings expressed by the son, who is desperate to visit the big city of Jerusalem. What is it like, he asks. Answers Yeshua, “Dirty and corrupt. But alive. Very alive.”

The father, however, is determined to keep his clan in this isolated spot for the rest of their lives as his wife’s health wanes. Yeshua, who realizes that the conflict before him reflects his own concerns about his Father, does what he can to ease the family’s burdens out as he carries water from a stream and assists the father with his labors. The presence of an adolescent boy does allow for some humor, including that of the bodily variety. But when a situation arises that pits the will of the father against that of the son, a tragic result is all but certain.

At some point, the audience will likely want to just sit back and take in the breathtaking landscapes that are spread out before them. The bleached-out grandeur and hypnotic ripples of sand that form the Anza-Borrego Desert  southeast of Los Angeles (standing in for Israel’s Negev) make a good case for believing in a Supreme Being. At the very least, we should give thanks that an almighty cinematographer like Emmanuel Lubezki, who has won a record three consecutive Oscars for his work on “Gravity,” “Birdman” and “The Revenant,” exists.

Also enriching this experiment that is more to be admired  for what it attempts than what it achieves (the rushed ending especially fails to live up to the film’s promising start) is the haunting minimalist score by Saunder Jurriaans and Danny Bensi (“Enemy,” ”Martha Marcy May Marlene”).

Garcia, whose resume is full of tender and thoughtful ruminations on the human condition such as “Albert Nobbs,” “Mother and Child” and “Nine Lives,” should be lauded for finding a more approachable way to tackle matters of faith. As much as I enjoy Cecil B. DeMille’s Jell-O-enhanced parting of the Red Sea during the annual TV airings of “The Ten Commandments,” “Last Days in the Desert” suggests that simplicity can also be a virtue in retelling these much-told tales. 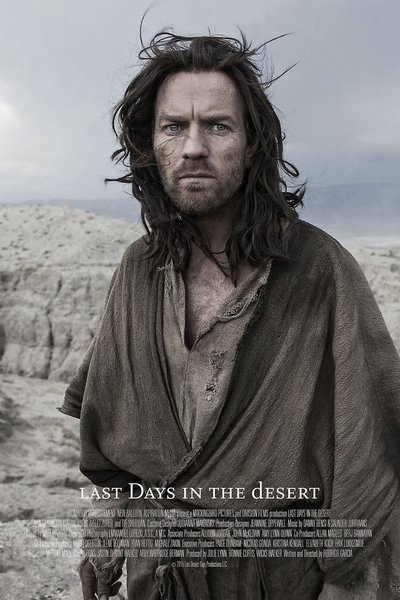 Rated PG-13 for some disturbing images and brief partial nudity.