A numbing and soulless spectacle of 3-D, computer-generated imagery run amok, Ridley Scott’s “Exodus: Gods and Kings” presents an enduring tale by pummeling us over the head with it.

The story of Moses rising up against the Pharaoh Ramses and leading hundreds of thousands of Hebrew slaves out of Egypt to freedom is one with which we’re all extremely familiar. It’s the entire point of Passover. Scott is not reinventing the wheel here. Rather, he’s invented the biggest, shiniest, noisiest wheel imaginable, then he runs over us with it rather than inviting us along for the ride.

Certainly, there’s an allure to seeing this sort of old-fashioned, biblical epic on the big screen–and indeed, within this proliferation of pixels, there is undeniable craft and heft to the massive set pieces and behemoth battles. From the costumes to the weaponry to the interiors, it’s obvious that Scott’s team took great care in considering and creating every detail. But the film as a whole (with a script credited to Adam Cooper & Bill Collage and Jeffrey Caine and Steven Zaillian) feels overstuffed and over-glossed. Self-serious to a fault, it packs in more and more in terms of story and extravagant visuals while offering too little in terms of actual character development and engaging drama.

When he’s been at his absolute best in his lengthy career, directing films like “Blade Runner” and “Alien” and even "Thelma & Louise," Scott has established himself as a visionary and a master of creating imagery that would go on to be iconic. “Exodus” feels oddly impersonal. It’s hard to tell what Scott’s point is here, beyond making his Academy Award-winning “Gladiator” look like an independent film by comparison. Earlier this year, “Gladiator” star Russell Crowe played the title character in Darren Aronofsky’s “Noah.” That was a biblical epic which also was massive in scope but at the same time beautiful and strange; it stayed true to its source material but found an intriguing and challenging tone. It actually evoked emotion.

In “Exodus,” the plagues are fun, briefly, and that’s about it. At least, the prospect of the plagues presents the promise of fun: “Eww, gross, a massive pile of frogs,” or: “Aww, yeah, here come the locusts.” But like so much else in the film, these potentially thrilling sequences of havoc and terror evolve into enormous swarms digitally divorced from their effect on humanity. (The boils, though–they remain. And they’re nasty.)

It certainly doesn’t help that Christian Bale plays Moses in mostly stiff and detached fashion. (But hey, at least he’s more intelligible here than he is as a grumbling and tormented Batman). Here, he’s a quietly capable leader –a general among men, and in the eyes of the Pharaoh Seti (John Turturro), who raised Moses as his adopted son, clearly more capable to take over the kingdom than his own biological son, the preening and egotistical Ramses (Joel Edgerton). Despite the thick eyeliner, the shiny, bald pate and the radiant golden wardrobe, Edgerton is never quite flamboyant enough. He could have gone over the top with the role and helped breathe some life into this picture. He seems sadly uncomfortable.

Once it’s revealed that Moses is actually, you know, Jewish, he’s cast into exile, where he forges a pleasant, new life for himself as a sheepherder with a wife and a son. Meanwhile, over the past nine years, Ramses has assumed power and essentially turned Memphis into Las Vegas: overbuilt, overpopulated and so generally overwhelmed that slaves are being burned to death just to thin the place out. (It seems entirely possible that Scott does not get the irony of constructing something that is simply too big.)

It’s at this time that Moses starts seeing visions and receiving instructions as to his true purpose: to return to his homeland and free his people. God appears to him as an impish British schoolboy, which is a rather clever idea. In retrospect, Old Testament God does seem rather capricious and destructive in ways that remind me of my overtired 5-year-old son playing with his Legos after a long day at school. But that casting represents a rare moment of innovation in a film that may as well come with a checklist at the door. Even the parting of the Red Sea–which should be a spectacular event generating legitimate excitement–suggests the draining of a massive bathtub.

Ben Kingsley appears in a woefully small role as Nun, the elderly scholar who shares the news with Moses about his true heritage, yet he can’t help but infuse his few moments with great dignity. As Joshua, who helps Moses lead the slaves out of Egypt, Aaron Paul is mostly relegated to sticking by Moses’ side, a huge waste of both his presence and his ordinarily inspired instincts. Sigourney Weaver gets even less to do as Ramses’ haughty mother, Tuya, while Hiam Abbass, as Moses’ mother, Bithia, has only a handful of lines of dialogue.

So why is this blockbuster different from all other blockbusters? It’s not. There’s just more of it. And less. 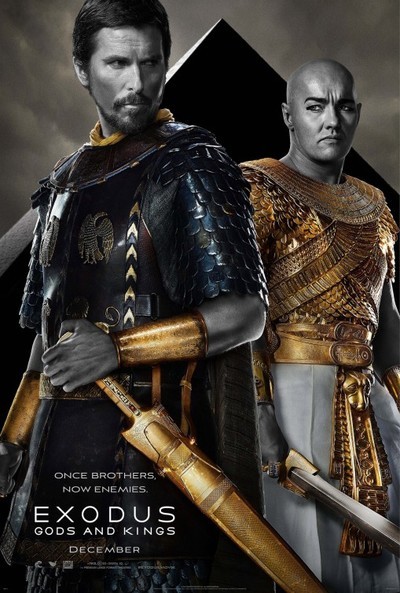 Rated PG-13 for violence including battle sequences and intense images