There's a place where the river opens up into the whole wide world. When you reach it, the horizon expands to infinity, and everything ahead looks impossibly big and uncharted. Jeff Nichols' "Mud," a Mississippi River coming-of-age story, takes place on that threshold, down in the delta where innocence and experience, the past and the future, all run together like dirt and water.

It starts off as a boy's adventure story, in the dark of a kid's bedroom. Equipped with a walkie-talkie and a flashlight, 14-year-old Ellis (Tye Sheridan) sneaks out the window of a ramshackle house built on the water. On his way past the kitchen, he stops briefly to listen in on some curt and cryptic talk between his parents before heading out into the darkness, where he and his friend Neckbone (Jacob Lofland) navigate the winding waterways in a small outboard-powered skiff.

When they arrive at that natural gateway, we first see it reflected in their awestruck faces. Then we see the mighty river they're about to enter. Downstream there's a small island where they've spotted a tiny blue and white wooden cabin cruiser that floodwaters have lifted up into a tree. (You may remember the image from another river journey: Werner Herzog’s "Aguirre, the Wrath of God.") To them, it's a ready-made treehouse, but what they discover (along with a stash of Penthouse magazines, some cans of Van Camp's Beanee Weenee, a package of sliced bread and a few other provisions) is that somebody's already living there.

His name is Mud, and he embodies many connotations of that word: coarse, mucky, disreputable, opaque, unstable, common as dirt. Mud (Matthew McConaughey) beguiles the boys with colorfully embroidered origin-stories about his snake tattoo, his lucky shirt, the crosses on the heels of his seven-league boots and a long-ago bite from an Edenic serpent that almost killed him, right here on this very stretch of river. Most of these personal legends can be traced back to the one unshakable verity of his life: Juniper (Reese Witherspoon), his first and only true love since childhood.

The hints of violence in Mud's murky past, and the pistol tucked in the back of his jeans, make him a little scary, and thus all the more charismatic to the boys. He's the dangerous dog that won't let anybody else approach, but flatters the kids with his acceptance and trust. Given that Ellis' parents are on the verge of splitting and Neckbone is being raised by a feckless, scatterbrained uncle, it doesn't hurt that Mud, an adult male, gives them attention and advice that makes them feel needed and important.

For Ellis and Neck, Mud is also a romantic figure. They sympathize with his devotion to Juniper because they're just now taking their own early, uncertain steps in the sticky terrain of love and courtship. Mud persuades the boys to help him — first with food and supplies, later with the herculean task of getting the boat out of the branches and into the water so he and Juniper can float off to an outlaw fairy-tale happily ever-after.

The great American literary critic Leslie Fiedler said: "To be an American (unlike being English or French or whatever) is precisely to imagine a destiny rather than to inherit one; since we have always been, insofar as we are Americans at all, inhabitants of myth rather than history." That could be the inscription on this film. Writer-director Nichols, who also made "Shotgun Stories" (2007) and "Take Shelter" (2012), works in that American tradition. He has a rare ability to root his archetypal Southern fables in rich observational detail. They remain tangibly specific but take on the larger resonances of folklore.

"Mud" runs deep with undercurrents from American movies and literature: "Tom Sawyer," "Huckleberry Finn," "The Night of the Hunter," "To Kill a Mockingbird," "Moby Dick," "Cool Hand Luke," the films of Nichols' fellow Austin-resident  Terrence Malick ("Badlands," "Days of Heaven," "The Tree of Life"). But the picture never comes unmoored from reality or drifts off into lazy abstraction and cliché. Nichols' eye for particulars, his feel for the characters and landscapes (and waterscapes), is so vivid you feel you could get bit by a mosquito or a water moccasin if you're not careful.

Adam Stone's luminous widescreen photography and David Wingo's acoustic swamp music also have a lot to do with that, and so does the casting. McConaughey is on a roll, and this part, which Nichols wrote for him, is the strongest and most subtle lead performance of his career. (Could this be what becomes of Wooderson after he stops messing around with high school girls?) Even better, if that's possible, is young Sheridan (Brad Pitt and Jessica Chastain's youngest son in "The Tree of Life"), whose first kiss with a slightly older girl (two grades?) at a beach bonfire is so flawlessly rendered it already feels like it came from a classic movie.

American icon Sam Shepard, another Malick veteran, appears as a houseboat hermit sporting Billy Bob Thornton's haircut from "Sling Blade." Michael Shannon, the magnetic star of Nichols' previous pictures, effortlessly steals scenes as Neck's slacker-diver uncle. (A detail: When we meet Neck he's wearing a faded hand-me-down Fugazi T-shirt that suggests he must live with an older brother or male relative. The moment we see the inside of Uncle Galen's trailer, we have a pretty good idea of where it came from.)

And while Ellis looks like a cross between Atticus Finch's kids Scout and Jem (Mary Badham and Phillip Alford) in Robert Mulligan's "To Kill a Mockingbird," Neckbone is the perfect fusion of River Phoenix and Jerry O'Connell in "Stand by Me." The resonances are all around. 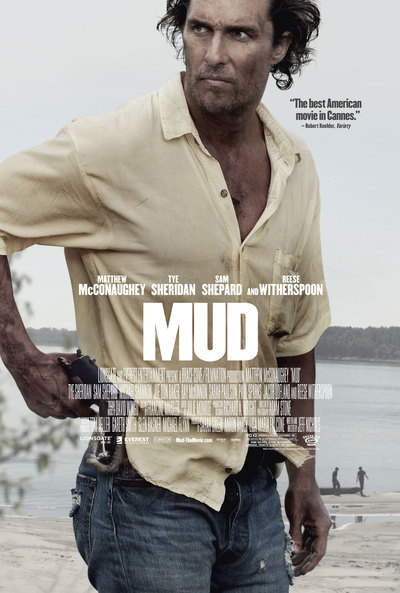