Return to the Riviera: Our 2015 Cannes Coverage

I'm so thrilled to be back on the Riviera to cover the 2015 Cannes Film Festival, alongside a trio of great contributors to RogerEbert.com: Barbara Scharres, Michał Oleszczyk and Ben Kenigsberg. Throughout the festival, which spans from Wednesday, May 13th, through Sunday, May 24th, you'll be able to check into the site each day for the latest news and reviews of this year's highly anticipated selections (see our Table of Contents). I'll also be hosting video reports from the festival with the expert assistance of Scott Dummler and Bob Long. It's going to be a great two weeks, and I can't wait to share them with you.

In anticipation of what's to come, here's a look back at a few highlights from last year. First, a roundtable discussion between Barbara, Michał and Ben, discussing their favorite films from last year's festival.

Here's another video from last year, where I reflect on the emotional Cannes screening of "Life Itself," as well as report on the premieres of Bennett Miller's "Foxcatcher" and Tommy Lee Jones's "The Homesman."

And finally, here's a look back at Barbara's wonderful piece on the 2014 "Palme de Whiskers."

All of Cannes is quivering in excitement in anticipation of the awards. The bestowing of the Palme d’Or is imminent. That means it’s time for the coveted Palme de Whiskers, my annual imaginary prize for Best Feline Performance.

I regret to say that the dogs have had their day in a big way at the 67th Cannes Film Festival. We cat lovers have had to tolerate insufferably flamboyant performances by dogs in countless films including "Saint Laurent" (disgusting little bulldogs), "White God" (killer canines), and Jean-Luc Godard’s "Goodbye to Language" (stereotypical slobbering pooch). Jean-Luc’s betrayal especially hurts, since a pair of kittens from his "Film Socialisme" were awarded the Palme de Whiskers back in 2010.

Preparations are in place for a fabulous award ceremony at the glittering Palais de Kitty—cats along the Croisette, the Cannes seaside promenade.  The glamour-pusses of the Riviera are assembled in their finery, with rhinestone collars galore. Last year’s winner Ulysses, feline star of "Inside Llewyn Davis," stands ready to present the award.

Never has a more distinguished jury been assembled for the Palme de Whiskers. Some of the world’s most important film critics have sent their cats. From the U.K., representing Sight & Sound, editor Nick James’s mysteriously nocturnal Cleo is splendid in her ginger and white coat.

Vogue magazine film critic John Powers and his wife, novelist Sandi Tan ("The Black Isle"), sent two fine judges. All the way from L.A. come grey-striped Chubs, his un-catlike tuxedo T-shirt a little tight around the belly, and elegant Nico, a snotty Siamese. "I don’t wear any fur but my own," she chortles throatily. Finally, there’s elderly Mr. Snuffleupagus, sent by Art Forum’s film critic Amy Taubin. He’s badly in need of a catnap due to the medication he took on the plane. 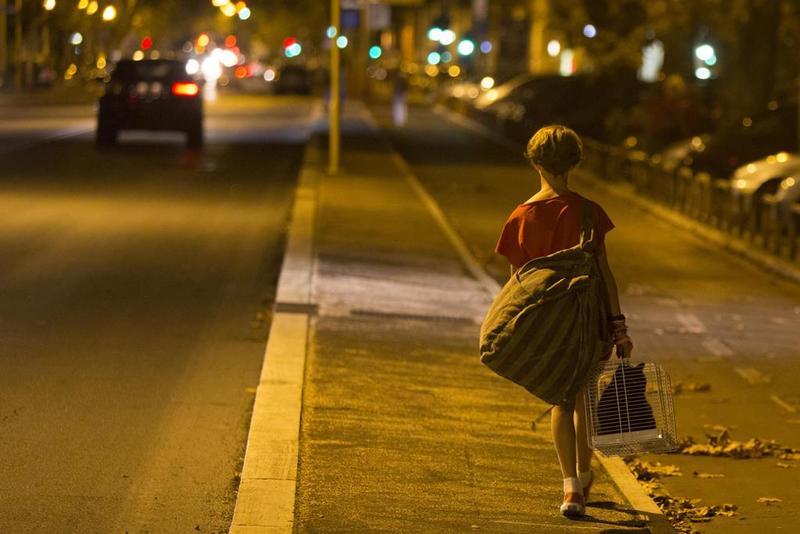 The nominees are: [I’ve given names to those whom callous scriptwriters have failed to identify.]

From "Mr. Turner" by Mike Leigh, the fluffy trio of "Joe," "Mel," and "Will" get an ensemble nomination for walking on tables. Only two have lines, though, which might be a drawback for this jury.

From Pascale Ferran’s "Bird People," golden-eyed "Charlie," named for Charles de Gaulle airport where he has his big scenes, has a dramatic action scene in pursuit of a sparrow. Strong contender!

Asia Argento’s "Misunderstood" did some fine cat casting, most notably the sleek black male "Dac," as he is named in this saga of childood. The heroine said it all in describing her pet: "Pointy ears, electric whiskers, and a traitorous nose."

Also from "Misunderstood," there’s "Simon Le Bon," part-Siamese, who gets to lounge in a pink boudoir and flick her tail.

And finally, from multi-national omnibus film "Bridges of Sarajevo," there’s "Izzy," a little adolescent of mixed heritage performing cute stunts in her first role in the Isild Le Besco sequence of the film.

What a line-up! The discussions are intense. Mr. Snuffleupagus champions adorable "Izzy" but he’s lying on his side and snoring by the time the vote is taken. Chubs mentions that "Misunderstood" has one of the great cat lines of all time: "What a piece of pussy," but Cleo snidely points out that it doesn’t count because it refers to a human. Everyone is impressed with Charlie’s performance in "Bird People," but Nico rakes her claws across the ballot dismissively, snarling that the big stunt was mostly CGI. "And, his voice was dubbed," adds Cleo.

The moment has arrived. My own Miss Kitty is the mistress of ceremonies. She’s disconcerted for just a moment when Nico cattily asks if her red highlights are real, but Chubs gives a friendly wink. Odysseus, the Brad Pitt of the feline film world, leaps to the stage with an athletic bound. The winsome females in the audience are about go in heat in ecstasy at the sight of this handsome stud, and they’re invitingly treading the floor with their hind legs in excitement.

Odysseus claws the envelope open, his golden-striped paws gleaming. This year’s Palme de Whiskers goes to Dac, from "Misunderstood!" Asia Argento will be so proud. The jury pronounces him a cat role model for acting as a little girl’s best friend and guardian angel; extra points for being an extra-cuddly armful. Quite a good-looking tomcat himself, Dac gives Odysseus a friendly nod but scampers back to the audience, his eye on a few of those flirtatious lady cats.

The grand salon of the Palais de Kitty-cats is vibrating with purrs. The waiters are beginning to pass out the catnip appetizers, but these pussycats are high on a job well done. Take that, you festival dogs!