The journey in Tommy Lee Jones' "The Homesman", based on the 1988 novel by Glendon Swarthout, travels from west to east, from the unmarked Nebraska territory to a town in Iowa. It is a reverse trajectory of the typical Western path, the wildness of the prairies and plains reverting, startlingly, to a tame village perched on the edge of the placid Missouri River. When civilization finally arrives in the final section of the film, it seems palpably fragile; what has come before is so unremittingly desolate.

"The Homesman," despite the title, is about women. Women are the center of the action, women drive the action forward, women are not only damsels in distress but heroic figures of grit and courage (sometimes in the same moment). The men are helpless bystanders or ambiguous allies. There is only one villain in the film, and he is a villain because he is callous. He lacks empathy. Tommy Lee Jones, as a director, homes in on the surreal aspects of the story with beautiful sensitivity and strangeness ("The Homesman" is an extremely strange film), highlighting the monotony of the landscape in which figures are either dwarfed by the vastness of it or tower above the flat horizon. The West, as seen in "The Homesman," is an unforgiving place, with flashes of stark and nightmarish beauty. Three women have lost their minds in "The Homesman," but honestly, everyone you meet in the film is slightly crazy, the homesman most of all. Nobody is a pillar of mental health. Sanity, then, could be seen as overrated, especially in a world like the one in "The Homesman." And those who lose their minds may very well be the only realists in the story. These are deeply suggestive ideas, and when "The Homesman" works best it teeters around in that morally ambiguous territory. It's a risky film. Sometimes the risks pay off, sometimes they don't, but the feeling of risk infuses the film with chaos, humor, violence, beauty. "The Homesman" doesn't play things safe, and that's a welcome change.

Mary Bee Cuddy (Hilary Swank) is a middle-aged woman, born in upstate New York, who has bought land in the Nebraska territory. She is unmarried and farms the land herself. She yearns to buy a piano and comforts herself by playing hymns on a cloth keyboard. She is seen early on proposing marriage to a farmer who owns land adjacent to hers. She pitches it as a business proposition, although there is an urgent need and fragility beneath her words that tell a different story. He turns her down pretty bluntly: "You're too bossy and you're too damn plain." It hurts, it hurts bad, but Mary Bee does not pity herself. She has too much work to do.

During the tail-end of a particularly terrible winter, three women in the area descend into varying degrees of psychosis, dissociation, self-harm, and derangement. It is clear that they need to be transported to a place that can treat them, and the minister (John Lithgow) has a connection with a church in Iowa that has agreed to take them in. When the menfolk in the congregation balk at the job of transport, Mary Bee takes it on. A glorified paddy wagon is provided, complete with iron rings on the interior in order to chain the women in place, should it be necessary. The journey will be dangerous and long, and Mary Bee needs to hire a homesman, and George Briggs, a drunken out-for-himself claim-jumper, is just the man for the job. Mary Bee pitches it to him with the same matter-of-fact tone that she proposed marriage, telling him exactly what she needs and expects, and exactly what she will not tolerate. He's a bit of a buffoon, in his filthy long-johns and whining voice, but he needs the money.

The early introduction of the three madwomen is presented hauntingly by Jones. The images flash onto the screen, interrupting the main action of Mary Bee at her farm, and Jones crafts a collage of terror and dread. Gro Svendsen (Sonja Richter) is a Scandinavian woman, seen screaming in agony as her husband drags her dead mother out into the snowy night: the corpse is stinking, she can't stay in the house anymore. Arabella (Grace Gummer) is a teenager, with a young husband, and her three babies died in a matter of days from diphtheria. She has gone comatose, staring out the window, clutching a rag doll. Theoline (Miranda Otto) is shown strolling outside into a biting snowstorm, a wailing purple newborn nipping at her bare breast, and she casually tosses the baby down the hole in the outhouse; the most harrowing image in the film. The presentation of madness is both compassionate and unblinking.

Briggs is a comic figure in the beginning, a drawling and inappropriately insouciant Walter Brennan-type character, garrulous and careless, demanding Mary Bee buy him a jug of whiskey for the ride. The dynamic between Briggs and pious straight-talking spinster is one of the pleasures of the film. It almost becomes a classic buddy picture. Both characters are outlaws. Neither of them fit into "normal" society. Both of them are individualists, who value strength, who have strength, but who will always be just a little bit on the periphery of accepted norms. This could be seen as a tragedy for them; it could be seen as a triumph. The film does not come down on either side. The situation is not "either/or". It is "both/and."

There are confrontations with the elements during the journey; there are moments when they lose control of the women. One breaks free; one kicks the other in the face; one is unable or unwilling to handle her own bodily functions as Briggs lifts her skirt up for her and barks, "Squat now. Come on. Pee." At first wary with one another, and at some moments damn near confrontational, Briggs and Mary Bee find that they are good partners, tag-teaming the job, and talking at night over the crackling fire as the three women lie tied up to the wagon wheels, asleep or in a daze.

For most of the film, it is Mary Bee's story. She is its anchor, and Briggs is her sidekick. Something happens three-fourths of the way through that puts Briggs in the center, as the title character. Having not read the novel, the moment came as an enormous surprise, almost shattering the fabric of the film, as harrowing, in its way, of the vision of the mother throwing her baby into the privy hole. In thinking back on it, there are fragments of behavior shown, glimpses of inner life, that makes that moment inevitable, in retrospect. The film expands exponentially as the formal narrative is destabilized, and things get distinctly stranger, although Jones keeps his eye on the overall theme of madness and survival; trauma and strength.

The strangest section of the film involves a stop-over at the Fairfield Hotel, standing alone in the middle of the plains, like an Andrew Wyeth painting, reminiscent of Sam Shepard's house in Terrence Malick's "Days of Heaven." The smooth-talking Irishman proprietor (James Spader) hopes to attract investors to this little spot in the middle of nowhere, surrounded by sheer emptiness. So he's a little nuts, too. Beautifully conceived and shot, the section is a tangent, but it is extremely revealing about Briggs' character, as well as a sardonic, pointed commentary about the concept of civilization. Civilization, as represented by the small huddle of farms out in Nebraska, does its best to help those who need it. Civilization, as represented by the tiny town in Iowa, is kind and genteel, although it doesn't quite know what to do with a man like Briggs. Elsewhere, though, like at the totally empty Fairfield Hotel, with its sideboard heaped with luscious food, and its paintings of naked women in the lobby, civilization is cold and unfeeling. There is an argument to be made that the only place where someone like Briggs, or someone like Mary Bee, could ever hope to "fit in" is out there in the unmarked territories, cutting their way into the land, relying only on themselves, a landscape where eccentricity is an asset.

Jones' visual style is simple and clean, and cinematographer Rodrigo Prieto finds some gorgeous John Ford touches; people shown in black silhouette through barn doorways, or house doorways, with the vast bright landscape beyond, a clear demarcation between interior and exterior, displaying the individual against the sheer size of the land out there. There's a section where Mary Bee gets separated from the wagon and wanders the plains through the dark night on her horse, disoriented and lost, calling out for Briggs, resorting to chewing on grass like a feral creature. These dark sequences have the hallucinatory quality of a nightmare.

Novelist Glendon Swarthout was interested in unlikely characters who have to show extraordinary courage and strength. He was interested in the moral ambiguities of familiar genres. The best example of this comes in his most famous book, "Bless the Beasts and the Children" (which has never gone out of print since it was published in 1971). "Bless the Beasts and the Children" tells the story of a group of misfit kids who have been sent to a boys' home/dude ranch in the American Southwest. Turned into a film in 1972, directed by Stanley Kramer, it takes the age-old themes of the Western (man vs. nature, man vs. the landscape, man vs. himself) and pours it into the service of a modern coming-of-age drama. "The Homesman," like "Bless the Beasts" questions the "norm". It asks questions about what strength looks like (in men and in women), and also what strength might actually mean, what it signifies. Holding a rifle on an enemy requires strength. So does being kind and caring to someone who has descended into psychosis. Jones puts all of those elements on a level playing field. Women are misfits here because of their biology. Biology could be seen as an enemy: motherhood is wonderful, but terrible when your infant triplets all die on the same day. And what of those, like Mary Bee, who have been denied the "natural" outlet for women, through wifehood and motherhood? What does biology mean then?

The final section of the film is suddenly conventional, and represents a confused petering-out of strength, a tame meandering coda to the chaotic thrust of the story. It's almost like "The Homesman," barreling along at a high speed, powerful and weird and funny and terrible, hits an invisible speed bump all of a sudden, and the pieces fly apart. But the conventional coda cannot erase the risk-filled pleasure of all that came before. 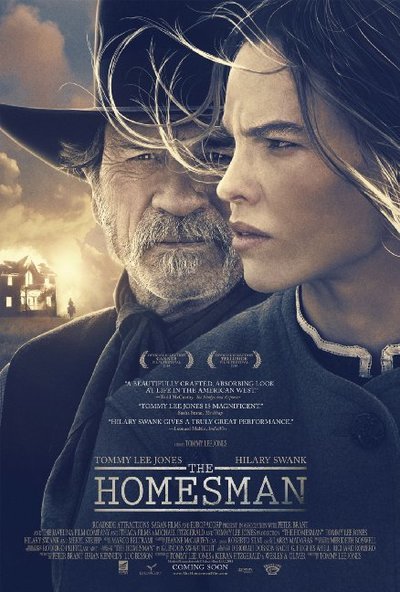 Tim Blake Nelson as The Freighter