Imagine an "R" rated "Lassie" by way of "Spartacus." That's Kornél Mundruczó's "White God," a brutal but stirring fantasy about street dogs rising up against cruel and indifferent humans.

Between its (faked) animal-on-animal and human-on-animal violence, harsh language, sexual situations and casual drug use, this Hungarian drama is definitely not for children. And yet it plugs into some of the same feelings of childlike awe and terror that make classic animal pictures (including monster movies) so memorable. "Old Yeller," "E.T.," "Black Beauty," "King Kong"—there are bits of all of them in the DNA of "White God," but the film is its own amazing thing. From its opening flash-forward of its 13-year old heroine, Lili (Zsofia Psotta), cycling down an eerily empty street amid a wave of masterless canines to its numerous, wordless images of the world as seen through a dog's eyes, the film has a rare sense of the fairy-tale uncanny. It doesn't always hang together—its attempts to parallel the life of its mistreated, misunderstood and often neglected heroine and her beloved dog Hagen don't always make storytelling sense, mainly because the dog simply has it worse. But Mundruczó and his filmmaking team get the basics so right that the movie's missteps don't matter much. Owing less to contemporary Hollywood films than to broad-brushstrokes silent-era melodramas, this is an image-and-sound driven example of purely cinematic storytelling. Throughout much of its running time, it achieves a dreamlike, sometimes nightmarish power.

Lili is a child of divorce whose college professor mother leaves town to pursue a job opportunity for several months, leaving her in the care of her father Daniel (Sandor Zsoter), a slaughterhouse inspector who's first seen overseeing the evisceration of a dead cow. This gory sequence sets up the movie's world view: humans arrogantly carry themselves as if they have unquestioned dominion over all of nature, especially animals. They treat their fellow mammals as property while occasionally paying lip service to the idea that they're caretakers and companions. The blood flowing across the slaughterhouse floor psychically tints the whole movie. It says, "Society treats all animals as meat—and even if you think you're not part of that mentality, you probably are."

Daniel is an impatient and in some ways petty man. He barely tolerates his daughter's love for Hagen, and is deeply uncomfortable with letting the animal live with them in an apartment building that forbids unregistered street pets. (Hagen is a mixed-breed street dog who can't be kept legally anyway, unless Daniel pays a tax and gets a proper license.) When a nosy neighbor reports Hagen to animal control, "White God" turns into a harrowing tale of separation and reconciliation—a love story of sorts that explicitly invokes Richard Wagner's opera "Tannhäuser" in scenes where Lili plays trumpet in a high school orchestra overseen by an arrogant teacher-conductor. Over the course of the film, Hagen wanders the streets alone, dodges cars and forages for food, and eventually ends up being captured and brutally conditioned as a fighting dog before escaping to try to find his way back to his human friend (calling Lili an "owner" seems at odds with the movie's spirit).

But although the simple plot is articulated with great clarity, this is mainly a film of moments. And what moments! Mundruczó's and his cinematographer Marcell Rev shoot Lili and Hagen's story with a documentary-like immediacy, following much of the action with a handheld widescreen camera that's often placed at ground level, the better to show harsh urban landscapes through a dog's eyes. The cutting, by David Jancso, is fast, sometimes choppy and deliberately disorienting, to make us think that animals are actually fighting or suffering when what really we're seeing is cinematic sleight-of-hand.

But despite all these "gritty" affectations, the movie's tone is defiantly old-fashioned. The human characters are clearly defined as moral or immoral based on how much empathy they show towards animals. The movie approves or condemns them based on whether they treat the movie's street dogs as fellow beings, with feelings and inherent rights, or as property, or nuisances, or menaces to order.

The comparison to Stanley Kubrick's "Spartacus" is not offered lightly. "White God" is a slave revolt film in girl-and-her-dog drag, with Hagen as our intrepid hero and surrogate—much more so than Lili, who's appealing but never in as much immediate physical danger. We don't just want Hagen to escape his tormentors, the worst of whom is a dogfighting trainer who drugs him, tortures him and trains him to kill other dogs; we want him to seek revenge for humankind's collective crimes against his species—and we may not have thought of them as crimes until Mundruczó script laid them out for us, in a series of coolly observed, elegantly choreographed, often devastating set-pieces.

A brief interlude that shows Hagen being leashed and then sold by a homeless man drives home the idea of a ingrained and mostly unquestioned humans-above-animals hierarchy. The man is living in squalor and can barely feed himself, but he won't recognize the "humanity," such as it is, in the dog, because Hagen is "just" a dog—a resource to be turned around for a bit of money and a hot meal. An early scene of Hagen and other wild dogs being rousted by noose-toting animal control officers in a junkyard evokes Kubrick's Roman epic, as well as a "human roundup" scene in the original "Planet of the Apes," which was itself a not-too-subtle parable about slavery and bigotry. The dogfighting scenes are essentially gladiatorial arena scenes. There's an extraordinary moment where Hagen, who's forced to kill a fellow canine in combat, regards the body with what seems like moral revulsion. The scene is just a bag of editing 101 tricks—shot "A" plus shot "B" equals idea "C"—but it's sensationally effective because it's so unfussy and direct. It puts across the idea that Hagen is disgusted by what he's become, and furious at the conditions that pushed him to this point.

The use of classical music, including generous swaths of Wagner, is bold, and it's key to the film's magic; it confirms that "White God" is an unabashedly mythic melodrama that's always chasing the big moment, the grand gesture, the overwhelming feeling. When Mundruczó cuts from a dog fight to a shot of escaped dog running down a dark street, the camera tracking ahead of him at pooch-level, the drums pound and the string section swells, and you can feel your heart race. What's wrong will be made right. 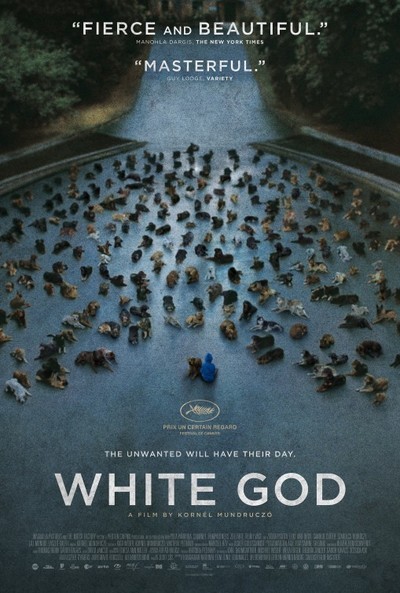 Rated R for violent content including bloody images, and language