We cannot imagine Llewyn Davis happy. The self-defeating Sisyphus of the new film written, directed, and edited by Joel and Ethan Coen is the first person the viewer lays eyes on in the movie. Bearded, his unkempt hair falling in his eyes, he picks out some steely, blue notes on a guitar as he sings "Hang Me, Oh Hang Me," not to be confused with "Dang Me." "Wouldn't mind the hangin', except for layin' in the grave so long," he sings, with a good amount of sincerity. The time is 1961, the place is New York City, and the venue where Llewyn—portrayed with haunting conviction by Oscar Isaac, who, like everyone else in the cast, does his own singing and playing—is picking and not grinning is the Gaslight, a soon-to-be-legendary landmark in the "folk revival."

Llewyn, as talented as he is, does not look to be one of that revival's future success stories. Why? For one thing, he's the protagonist of a Coen brothers movie. For another, after he finishes his song, the place's glib, slick, runty owner Pappi, directs Llewyn outside to see a "friend" who's been asking for him. Outside Llewyn finds no friend, but instead a suited, fedora-sporting stranger who exchanges a few words with the singer before calmly kicking and punching the daylights out of him.

And then Llewyn wakes up. And there's just the most adorable orange cat staring him in the face.

"Inside Llewyn Davis" is the most satisfyingly diabolical cinematic structure that the Coens have ever contrived, and that's just one reason that I suspect it may be their best movie yet. How Llewyn inadvertently inherits, loses, then re-finds, and kind of adopts, the aforementioned cat is one of the more involved traps of the movie's plot, which may make the wary viewer, or the all-around anti-Coenite, suspect that this is some kind of exercise in auteurial sadism, a charge the brothers themselves laid themselves open to when they admitted that in concocting 2009's great "A Serious Man" they thoroughly enjoyed torturing their lead character.

This movie—which can reasonably be described as feeling like a '70s Wim Wenders picture scripted by Billy Wilder and/or Preston Sturges from a story by Terry Southern—is different. Yes, Llewyn is an incorrigible screw-up, having, among other things, impregnated a friend who also happens to be the wife of another friend, two halves of the very palatable-to-the-mainstream female/male singing duo Jean and Jim (Carey Mulligan and Justin Timberlake). He's kind of hard to like, given his surly defensiveness.

But this movie doesn't give the impression that he's someone his creators like to push around. Indeed, there's a sense of not-quite-grudging empathy going on here. There's a scene early on in which Llewyn's at the Gaslight watching a new act, a not-bad but pretty vanilla folkie named Troy Nelson (Stark Sands). Besides being an army guy, he's also taking up couch space at Llewyn's second-favorite crash pad. After his own song, Troy invites Jean and Jim up to sing with him, and they do a nice version of "Five Hundred Miles." Llewyn does his level best to enjoy them, but soon the audience starts singing along, and Llewyn furrows his brow a little and looks behind him with wordless incredulity. The place he thought he understood, the place he thought he was part of, is becoming alien to him. And he doesn't understand why.

Well, he understands why a little bit. Like all of his associates in the movie, Llewyn is mourning a loss, a loss that has made him a solo act, a solo act with a box of unsold records and no winter coat as the days grow darker and shorter The chip on his shoulder is part of his new defense (who knows, maybe it's not new; the movie is cannily selective about revealing its back story), but he still thinks he's got something to prove. After defiantly telling his sister that, no, he won't be going back to the Merchant Marine for a stint at sea, he impulsively joins—with cat in tow—a dyspeptic, shambling jazz musician and his doggerel-mumbling beatnik "valet" (John Goodman and Garrett Hedlund, respectively) on an ill-fated road trip to Chicago. It's a pilgrimage of sorts, to present himself to a reigning folk impresario played by F. Murray Abraham. Dryly noting the title of Llewyn's solo record, this man requests, "Play me something from 'Inside Llewyn Davis.'" And so Llewyn does. In both senses of the term.

It's a devastating scene in a movie full of devastating scenes. And full of quick, devastating observations. There's a whole movie in one shot of Llewyn's left foot, which he just inadvertently plunged into an ice puddle, slipping out of its loafer as he sits at a diner counter and tries in vain to squeeze the freezing cold out of his soaked sock. The beautiful, cloud-gray and autumn-leaf ocher cinematography by Bruno Delbonnel doesn't just cast a mood, it conjures a mode of existence. Moving, funny (but not frivolous; the characters never turn into cartoons), brilliant, it's a rib-sticking movie that represents a new high for its creators. 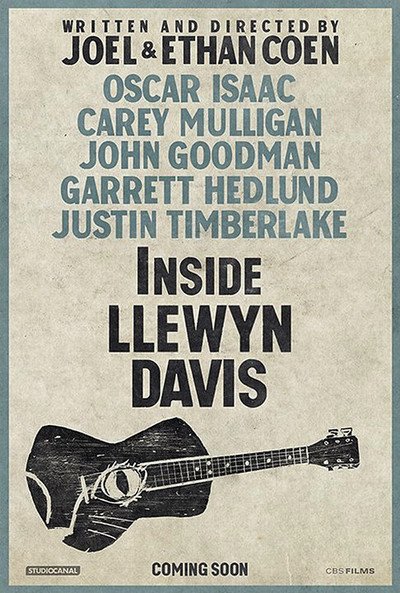