Pascale Ferran’s “Bird People” contains two complementary dramas within its unique structure; neither of them completely work. While there are some phenomenal twists of the narrative knife in this unique story of a flier who grounds himself and an earthbound woman who takes flight, “Bird People” also includes wildly aggravating tonal and pacing issues. It’s a film about jumping into the void, taking that risk that we have all considered taking at one point or another in our lives. We all reach moments in our existence where we’re tempted to just take flight, leave the world behind. Family, friends and obligations usually keep us from doing so, but the urge to leave it all behind never fully disappears.

Gary (the always-good Josh Charles, who reportedly got this part through his fantastic work on “In Treatment”) is the man who jumps into that void when he decides, after a few dull business meetings, that he’s not leaving Paris. He’s not going on to his next meeting in Dubai. He’s not returning home to the States. He’s quitting his job. He’s leaving his wife and family. And he’s not even sure what he’s doing next or where he’s going next. Gary calls his co-workers and breaks the news. And he has an emotional, devastating conversation with his wife (Radha Mitchell) via Skype. In detailed, heartbreaking beats, we watch a man tell his partner that he won’t be coming home. Sure, there’s an implication of love lost between the two of them a long time ago, but it’s still hard to fathom a man leaving so much responsibility behind him like an unused plane ticket.

After Gary’s life has been disassembled to the point that he’s free from all tethers, a maid named Audrey (Anaïs Demoustier) similarly throws off her traditional structure in a way that I won’t spoil (but the title certainly hints at it). The second half of “Bird People” replaces the realism of the first half with fantasy elements that thematically complement the first. This is a film about people breaking free, and when they realize that common subtext to their lives at the end of the story, it has some undeniable thematic resonance.

However, it takes WAY too long to get there. Ferran is prone to “flights of fancy,” pardon the pun, as some scenes in her film go on unchecked while others aren’t allowed nearly the right amount of time to develop. The scene in which Gary officially breaks his marriage is interminable, with long silences and what sound like improvised emotional beats. I’m sure one could argue that this enhances the realism of the scene, but that doesn’t make it entertaining. And the key fantasy sequence in the movie is one that I never thought would end. There’s a much stronger, tighter, captivating version of “Bird People” buried in this bloated take on a unique story.

“Bird People” is a movie for which it’s tempting to make excuses. I like Charles’ work here. As he was on “The Good Wife,” he’s so completely in the moment. He doesn’t overplay beats, and I hope he soon gets a part that really takes him to the next level in terms of international attention. Demoustier is a charming young actress. And there are clearly interesting ideas taking flight here. It’s the execution of the flight plan that keeps them from reaching their destination. 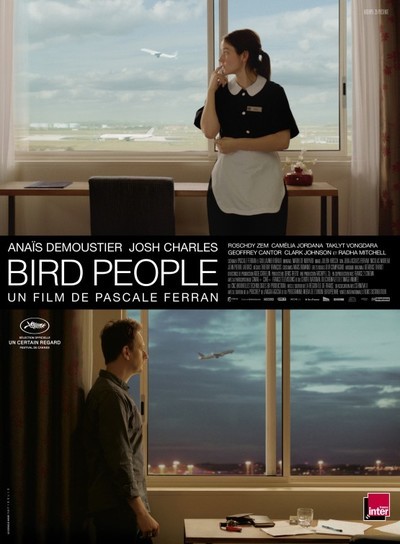