At 77, George Takei is as active in social media as the average teenager. Regardless of whether you follow him on Twitter or friend him on Facebook, he is probably somewhere in your social media feed right now. Someone you know has shared or retweeted something of his, either a humorous comment or an article link or one of those annoying, captioned picture internet memes that sometimes get people in trouble. Takei’s ability to become a constant fixture for a younger crowd while maintaining cult status for older generations is one of the topics discussed in director Jennifer M. Kroot’s fun and informative “To Be Takei.”

“To Be Takei” is a conventional documentary, but by no means a bad one. The requisite talking heads footage and media clips are assembled into a good narrative structure by Kroot and editor Bill Weber. The 94-minute running time moves briskly, and some of the details presented have an unexpected emotional heft. For those who only know Takei as Sulu in the original Star Trek TV series and its movies, “To Be Takei” offers some startling details about the actor and activist.

The first three or so minutes play like a preview for familiar George Takei details that the film will tackle later. Howard Stern appears to complain about shooting footage for his announcer Takei’s documentary. The USS Enterprise makes a cartoony entrance in the opening credits, beaming the Takei family down to Earth. A commercial for Sony featuring Takei appears on his TV screen, culminating with the ad’s pitchman uttering his well-known catchphrase, “Oh my.” And Takei laughs his famous laugh for the first of many times it will be heard in “To Be Takei.”

“The name of this movie should be ‘George Takei: Normalcy’,” states Brad Takei, George’s husband and business partner. They are power-walking down their block, talking and bickering like the old married couple that they are. Kroot’s camera maintains an intimate, though safe, distance as the duo addresses themselves and us. Their relationship subscribes to the old adage that opposites attract. George is very laid back, and Brad is, according to George, “a lot more cautious and pessimistic.”

“He’s a nervous wreck, and he knows it,” says George. “I asked him why he’s with me when I make him so…nervous,” he continues with a laugh before pointing out how Brad’s organizational skills are an invaluable contribution to their business relationship. Footage of Brad in action, competently handling the minutiae of his celebrity husband’s event-filled days, compliment the more emotional, self-described “temper tantrums” we occasionally see onscreen. At autograph signing events and Star Trek conventions, Brad keeps the line moving, funneling details to George before he speaks to the next fan.

Any mention of the original "Star Trek" series is bound to be accompanied by an appearance from Captain Kirk himself, William Shatner. His interview with Kroot, along with footage of Takei roasting Shatner on Comedy Central reveal an antagonism between the two that has apparently lasted throughout three seasons of the TV show, six movies and five decades. Passing a billboard with an ad for Shatner’s now-defunct “S—t My Dad Says” TV series, Takei points out that Shatner’s “mouth is covered, as well it should be.”

Though "Star Trek" plays a large role in “To Be Takei,” It’s not the film’s main focus. While there are interviews with Walter “Chekhov” Koenig and a silver-haired Nichelle “Uhura” Nichols, this is less Trek-oriented than one might expect, though it is used as a jumping-off point for several other topics. Trek’s creator, Gene Roddenberry, hired Nichols and Takei to show a diversity onscreen that did not exist in 1966. Takei’s Sulu, who would eventually become captain of his own ship in “Star Trek VI: The Undiscovered Country,” made an impression on viewers, especially those of Asian descent. Actors like John Cho and Lea Salonga explain how seeing an Asian person onscreen in a positive role influenced them.

“To Be Takei” doesn’t shy away from contradictions in Takei’s long life and career. The film highlights Sulu, but it doesn’t ignore the more stereotypical characters George Takei was advised to play by his agents after NBC cancelled the original "Star Trek" series. There are cringe-inducing clips of Jerry Lewis movies and TV cop shows, and Takei appears onscreen to apologize for them. There is also audio of Takei’s first appearance on Howard Stern’s show, where the now very active gay rights activist denies his homosexuality. Stating that he did it for career purposes, Takei connects his stereotypical acting roles with his days of being publicly closeted. Rejecting both allowed him to present a totally positive and accurate representation of himself in every venue in which he appeared.

“To Be Takei” also powerfully covers Takei’s childhood spent in a Japanese-American internment camp during World War II. Over footage of the camps, George narrates how his and other middle-class Asian immigrant families lost their farms and businesses when FDR issued Executive Order 9066. Takei speaks of wounding his father deeply by blaming him for not standing up to the government. Takei channels his pain and regret into his current role in “Allegiance,” a musical/memory play about the camps and the aftereffects they had on future generations.

The day I screened this film, my RogerEbert.com colleague and friend Scott Jordan Harris—an activist himself—penned a piece on a meme George Takei posted to his followers. The meme presented misinformation about the abilities of people who used wheelchairs in an attempt to score laughs. Harris pointed out that the person in the picture didn’t deserve mockery because, for starters, some wheelchair-bound people can stand and/or walk short distances. After an initial “it’s only a joke”-style response, Takei issued a second one apologizing for the meme, citing that he was unaware that not everyone in a wheelchair lacked mobility. He also spoke to the followers who vehemently claimed he didn’t have to apologize to anyone, citing that, as an adult, he had the final say on his acts of contrition.

Social media apologies are practically a cottage industry nowadays, and they usually ring false as a result of appearing forced. The portrayal of George Takei in “To Be Takei” made me reconsider my usual cynicism about celebrity mea culpas, at least in his case. Conventional documentary or not, I got something of positive value and insight out of “To Be Takei.” 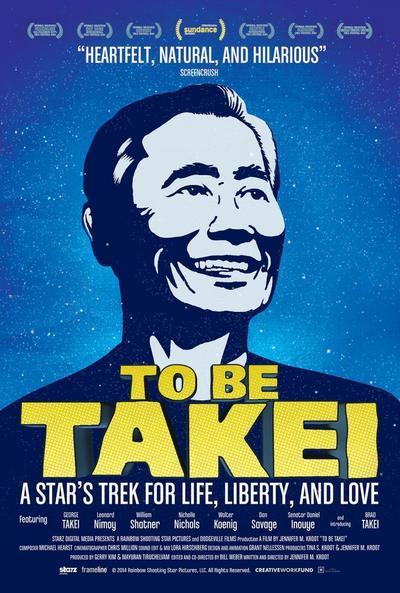 Leonard Nimoy as Himself

Nichelle Nichols as Herself

Lea Salonga as Herself

Howard Stern as Himself