For cineastes of a certain age, think back to when you saw "Blood Simple" in 1984 or "Pulp Fiction" in 1994. For those who could stomach the violent shocks of graphic carnage that were usually offset by sardonic humor, it felt exhilaratingly cathartic to gasp in horror and then laugh nervously at the outlandish amount of bodily damage done by often-inept perpetrators.

What innocent times those were.

Flash forward several decades to 2014. Clearly, 30-something director, writer and cinematographer Jeremy Saulnier has witnessed his fair share of guts splattered on multiplex screens. The bloody fingerprints of Quentin Tarantino and the Coen brothers—among other violence-prone auteurs—are smeared all over his tidy and tautly-told "Blue Ruin," a low-budget revenge thriller that has been steadily gaining a cult rep on the film festival circuit since showing last year at Cannes.

And yet this hillbilly-gothic tale of a damaged homeless drifter who seeks retaliation for the long-ago murder of his parents is informed even more by the headlines of today. While the cultural aftershocks of 9/11 could be spied in the rise of conflicted comic-book superheroes as well as in the extreme gore of such fright films as the "Saw" franchise, Saulnier might be one of the first filmmakers of his generation to reflect in a fictional way upon the devastation done to our national psyche by gunfire attacks that seem to show up daily in headlines, both grand-scale massacres and one-on-one confrontations.

There is no righteous Liam Neeson-like avenger with nimble weaponry skills and cool fighting prowess to root for in "Blue Ruin." Nor is there a borderline psycho on a self-righteous warpath who is easily vilified in the end. Instead, the central character is a deeply disturbed anti-social individual whose only outlet for his anguish is to eventually destroy those he thinks wronged him and his family. And when he goes after them, it is with the assistance of easily available firearms

When we meet Dwight (Saulnier’s childhood pal Macon Blair, whose sad-clown countenance deftly masks whatever demons that lurk within and at least initially wins our sympathy), he is helping himself to the comforts of someone else’s home—before making a quick getaway before the owners catch him. He spends his days at a Virginia beach resort, picking up abandoned bottles and turning them into cash. With his haunted near-dead eyes, bedraggled appearance and pale-colored clothes, he is practically a living ghost as he silently slips through the vacationing crowds without notice.

His shelter is a rusted-out shell of a Pontiac—the blue ruin of the title—and that is where he is found by a kindly police woman, who informs him that Wade Cleland, the accused killer of his mother and father, is about to be released from jail. Suddenly, this formless lump of a man comes alive with purpose, often clumsily though with occasionally reliable instincts, as Dwight single-mindedly hunts down his prey. Though forced to resort to a knife after attempts to obtain a gun fail, he manages to slay his dragon. At this point, audiences are likely to take some comfort in his success, as horribly savage and messy as the results turn out to be.

But then what? Dwight clearly hasn’t thought through the possible fallout of his actions, especially since it turns out he has left behind evidence that clearly identifies him. After breaking into another home to make himself innocuously clean-shaven and presentable in a stolen dress shirt and khaki slacks, he goes to see his estranged sister and mother of two.

During their reunion, he realizes that the surviving members of the Cleland clan have yet to inform the police of Will’s murder since there has been nothing on the local news. That can mean only one thing: They are taking justice into their hands. And Dwight, after telling his sibling to hide out elsewhere, plans to fight back.

Without spoiling too much of what happens next, Saulnier makes some interesting choices that reveal he has more on his mind than just indulging in mindless mayhem with spurts of dark comedy. It is not by happenstance that Dwight spends the last hour of the movie looking as if he is auditioning for "The Office." He is no longer an aimless, misfit vagrant. He is one of us.

Then there is the ease with which Dwight figures out where to finally get his hands on some firearms. He tracks down an old high-school buddy, the amiably beefy Ben (Devin Ratray, best known as bully Buzz in "Home Alone," who brings a bit of droll good ol’ boy sanity to the story before all hell breaks loose). Turns out this metal-head keeps an impressive arsenal on hand. Naturally, the Clelands boast as much if not more ammunition at the ready—including a crossbow.

Not unlike America, the film is as obsessed with such deadly hardware as it is repulsed by it, and Saulnier—who clearly put a lot of artistic thought into how his characters are mortally wounded—seems to be of both minds. Which keeps "Blue Ruin" from becoming a preachy turnoff, especially as it relies on such reliable tension-ratcheting devices as the body that goes thump in the car trunk and a living-room light on a timer that delivers a jolt when it clicks on. From camera angles—especially one unsettlingly spooky shot as Dwight’s car heads into a cloud of fog in a remote mountain region—to the unnerving soundtrack, this guy knows how to build a nail-biter.

Two final thoughts on the choices made by a filmmaker who is on the right path to a long career: I kind of love it that Eve Plumb—Jan, the resentful middle child on "The Brady Bunch"—is one of the Clelands. And there is one line that is a true keeper. After Dwight flinches while gathering the remains of a body, Ben solemnly states: “That’s what bullets do.” And that is the truth. 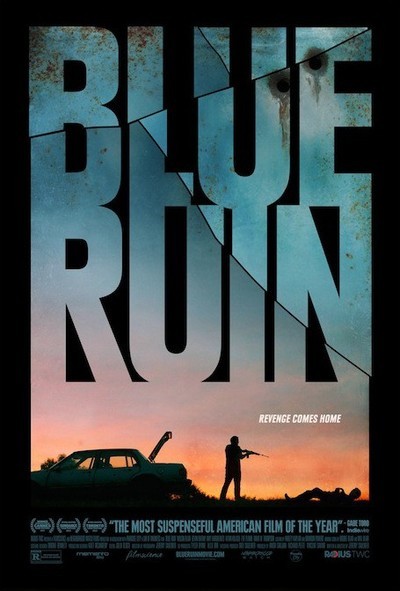