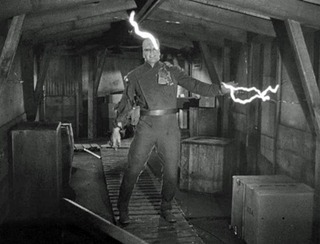 If all the year-end and decade-end lists (even though we realize the decade isn't actually over until 2011) have left you dizzied and depleted, take heart! Perhaps you've missed out on some of the more invigorating, far-sighted list-based ventures. Over at Some Came Running, for example, Glenn Kenny conducted an ingenious and fascinating project, going back and taking a look at the late Manny Farber's Best Films of 1951. Meanwhile, at The Crop Duster, Robert Horton is engaged in surveying the year's best -- in non-chronological order -- from, oh, about 1919 or so, to the present, posting a new list every Sunday. What fantastic delights are to be found in these itemized accounts...

Glenn has not only written essays about each of Farber's 1951 favorites, and Farber's own reviews of them, he's illustrated his posts with some nice big frame grabs. The titles in the series (each links to the corresponding entry):

"Little Big Horn" "Fixed Bayonets!" "His Kind of Woman" "The Thing From Another World" "The Prowler" "The People Against O'Hara" "The Day the Earth Stood Still" "The Man Who Cheated Himself" "Appointment With Danger"

Glenn writes of Farber's fondness for "hangout pictures," and his (not necessarily paradoxical) taste for the lean over the flabby:

[S]pending these hours in the Farber film world of '51, I found out it really is true what they say: they really don't make 'em like that anymore. Most of them share a hard-bitten attitude that a lot of contemporary pictures would like to emulate, but just don't know how to. For all of the putative advances that have been made in contemporary cinema in the depiction of sex and violence, and in use of language, there's also something that feels coddled, by comparison, in the supposedly franker contemporary material. Look at something like Losey's The Prowler in comparison with, say, L.A. Confidential (a film I largely admire, incidentally); for all the Production-Code-mandated restraint of the former picture, it oozes a particular kind of sleaziness that Confidential simply can't touch. I used to laugh off quasi-moralists who insisted that self-imposed censorship used to force American film artists to find more creative solutions to getting certain things across; having looked at a series of such well-curated films in a concentrated space of time, my certitude on this point has gotten a major shakeup.

Robert's 1951 list (composed many years later, and including foreign language titles Farber may not have seen in 1951) includes some of the same movies and directors:

"'The Thing' is an endlessly repeatable pleasure," he writes. "'Strangers' provides an array of teaching opportunities (one textbook scene after another); 'Diary' is one of those movies that expand in your mind for years after seeing them."

We all know of 1939's reputation, as Peter Bogdanovich memorably put it, as "Hollywood's Golden Year" -- and an undeniably swell one it was. But you may want to consider some other possibilities (Robert casts an eye toward 1959, but hasn't given it the full treatment yet). Like, I don't know, 1966 looks pretty darned spectacular -- and with only one American film on Bob's Top Ten:

Crowded at the top in 1966: this is a year of flat-out masterpieces, a lot of which appear to be coming apart at the seams (or at least dismantling the pieces of what people generally call a movie). Well, it was the era. I first saw Michelangelo Antonioni's Blow-Up on prime-time network TV in the Seventies, aware that it was an acknowledged great movie/head trip with some possible hotsy content, which was of great interest to me as an adolescent male.

I still remember that (edited-for-television, obviously) viewing, especially the way the movie snapped into gear as soon as David Hemmings' photographer takes the shots that might contain evidence of a murder. Couldn't understand then why the mystery bit frittered away. Now I love how skillfully Antonioni builds and walks away from that conventional suspense, as though to say, "Yes, you see how superbly I could make this kind of movie if I wanted to? But we're doing this instead...." (And in the bargain, the whole movie now puts you on the edge of your seat, for different reasons.) Hemmings' aimless character is like a movie audience, waiting to be grabbed by a story, as his black-and-white stills, laid end to end, appear to offer. Except maybe there's nothing there - maybe we glimpse a story because we just really want to have the story. But it won't work out that way...

Holy cow. If we had a year like that in the 21st century, why, heads would explode and world cinema would be unalterably changed forever. Here's hoping...

Next Article: Death and life of an editor: Karen Schmeer, 1970-2010 Previous Article: What it takes to win the Best Picture Oscar

What it takes to win the Best Picture Oscar