The solitary journey of the "little priest"

For its 60th anniversary, a restored digital presentation will play at the Music Box, April 22-28.

The young priest only smiles once. It is on the day he leaves the cruel country town to catch a train and see a doctor. A passing motorcyclist gives him a lift to the station, and as he climbs on behind him we see a flash of the boy inside the sad man. It is a nice day, it's fun to race though the breeze, and he is leaving behind the village of Ambricourt.

For the rest of the time in Robert Bresson's "The Diary of a Country Priest" (1951), the young man's face scarcely betrays an emotion. He looks solemn, withdrawn, stunned by the enormity of his job. His faith and vocation are real to him, but the parishioners in Ambricourt scorn and insult him, and tell lies about him. He is unwilling or unable to defend himself. He cannot understand the hostility. He keeps a daily journal in which he records his actions, which seem futile to him.

This film is the story of a man who seems in the process of offering himself to God as a sacrifice. He lives only on bread, wine and a little potato soup. He gives up meat and vegetables. Whether this is because his stomach won't hold down anything else or whether his diet is destroying his health is unclear until later. He is thin and weak, he coughs up blood, he grows faint in the houses of parishioners, one late night he falls in the mud and cannot get up.

It is a bleak winter. The landscape around his little church is barren. There is often no sign of life except for the distant, unfriendly barking of dogs. His church and the manor of the local count are closed off behind bars, as if gated against each other. Girls in catechism class play tricks on him. The locals gossip that he's a drunk, because of his diet, but we never see him drunk. Bresson often fills the frame with his face, passive, and the stare of his unfocused eyes.

"Diary of a Country Priest" has been called one of the two greatest Catholic films, along with Dreyer's "The Passion of Joan of Arc." I see them both as tragedies about true believers in the face of cruel societies. Both lives end in death, as Christ's did. The priest goes about his duties. He says a daily Mass, often attended by only one person -- and her motive is not spiritual. He calls on the people in his parish, so weak he can hardly speak with them, crossing their names from a list and stumbling back into the cold. A local man quarrels with him about the cost of his wife's funeral. People sneer at him as "the little priest."

He tries to counsel the governess of the count's daughter, who the count is having an affair with. The count insults him. The daughter is angry with her father and everyone else. The countess knows of the affair but doesn't care; she lost her son at a young age, and is still in mourning. In the great scene that supplies the center of the film, the priest urges the countess to have faith and accept Christ's love, and she undergoes a remarkable spiritual rebirth. Even this conversation is lied about and held against him.

Robert Bresson does nothing in a superficial way to please his audiences. The rewards of his films unfold slowly from their stories, and pierce deeply. He is very serious about human nature and the indifference of the world. He is not a Catholic but an agnostic who values any consolation his characters can find, in or out of faith.

His visual strategy doesn't break scenes down into easy storytelling elements but regards them as unyielding facts. In this film he opens and closes many passages with old-fashioned iris shots, reproducing the act of opening our eyes to the world, seeing its reality, and closing them again. There is a lot of background music, some of it vaguely spiritual, some of it saccharine, all of it more ironic than consoling. The look seems dark and depressing at first, but his films live not in the moment but in their complete length, and for the last hour I was more spellbound than during a thriller. Bresson does nothing to make me "like" the priest, but my empathy was urgently involved.

Bresson (1901-1999) was one of the great figures in the French cinema. In 50 years he made only 13 features. I saw the final one, "L'Argent," at the 1983 Cannes Film Festival, and recall that the press screening was unlike those of most directors; you would have thought the critics were in church. It is ironic that his films are more deeply spiritual than, in my opinion, anyone else's. He did not believe, but he respected belief, and hope.

Not for his characters the consolations of tidy plots and snappy conversations. They are faced with the existential dilemma: What is the point of life when its destination is death? In "The Diary of a Country Priest," the young hero welcomes the advice he receives from the local doctor and the old priest of a nearby parish. The doctor examines him, observes all the local people have been weakened by the alcoholism of their parents, warns him is undernourished, admonishes him, "face up to it!" The priest (as only a French priest might) attributes some of his problems to the fact that he doesn't drink better wine. The priest's advice is kind, practical, involved with the management of a parish. He treats the young man like a son. We sense he is a good old man and a good priest, but wary of devotion carried to dangerous extremes.

The star of this film, Claude Laydu, can hardly be seen to act at all. In life he was quite lively, and indeed hosted a TV show for children. Bresson had a famous theory that actors were "models." He didn't require them to act, and indeed would repeat a shot time and time again to remove visible signs of "acting." The scenario, the visual strategy and the editing would encompass his story. The actor must not seem too proactive because his character is after all only a figure pushed here and there by life and fate. This sounds like a severe artistic discipline, but the result can be purifying. After emerging from one of his films, you may sometimes see conventional movie acting as foolish: The characters actually believe they can influence the outcome!

A film like "Diary of a Country Priest" gathers its strength as it continues. There's always the sense that Bresson knows exactly where he's going and the simplest way to get there. Consider the devastating effect of the priest's journey to visit a specialist in Lisle. We never even hear the second doctor's opinion. We learn it through the journal, read aloud, as all through the film key moments are narrated. After leaving the doctor's office the priest goes to visit a friend of his from the seminary, now living a secular life in poverty because of illness, and seeks this man (who is living in sin) because he is still, after all, a priest, and can offer consolation and absolution.

One thing we are sure of is that the "little country priest" takes his vocation and faith very seriously. Nor does the film question them. It is about precisely the dilemma we must all face: How far can our ideas support us in the approach to death? The young priest's ideas prove to sustain him in the final moments, but they did little earlier to console him. He leaves behind a world of cruelty and petty ignorance. He did nothing deserving blame.

Notes: The hand and handwriting in the film belong to Bresson. "The Diary of a Country Priest"is in national release in 2011 in a new digital presentation commissioned for its 60th anniversary. In my Great Movies series I've also written about Bresson's "Pickpocket" and "Au Hazard Balthazar." 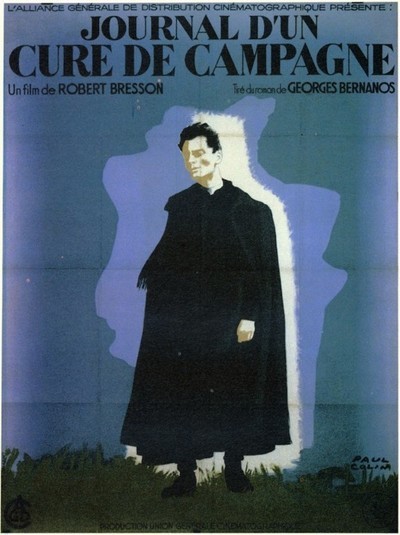