There's not a soft or sentimental passage in Billy Wilder's "Ace in the Hole" (1951), a portrait of rotten journalism and the public's insatiable appetite for it. It's easy to blame the press for its portraits of self-destructing celebrities, philandering preachers, corrupt politicians or bragging serial killers, but who loves those stories? The public does. Wilder, true to this vision and ahead of his time, made a movie in which the only good men are the victim and his doctor. Instead of blaming the journalist who masterminds a media circus, he is equally hard on sightseers who pay 25 cents admission. Nobody gets off the hook here.

The movie stars Kirk Douglas, an actor who could freeze the blood when he wanted to, in his most savage role. Yes, he made comedies and played heroes, but he could be merciless, his face curling into scorn and bitterness. He plays Charles Tatum, a skilled reporter with a drinking problem, who has been fired in 11 markets (slander, adultery, boozing) when his car breaks down in Albuquerque and he cons his way into a job at the local paper.

The break he's waiting for comes a year later. Dispatched to a remote town to cover a rattlesnake competition, he stops in a desert hamlet and discovers that the owner of the trading post has been trapped in an abandoned silver mine by a cave-in. Tatum forgets the rattlesnakes and talks his way into the tunnel to talk to Leo Minosa (Richard Benedict), whose legs are pinned under timbers. When Tatum comes out again, he sees the future: He will nail down possession of the story, spin it out as long as he can, and milk it for money, fame and his old job back East.

Confronted by a corrupt local sheriff and mining experts, Tatum takes charge by force of will, issuing orders and slapping around deputies with so much confidence he gets away with it. Learning that Minosa could be rescued in a day or two if workers simply shored up the mine tunnel and brought him out, Tatum cooks up a cockamamie scheme to lengthen the process: Rescuers will drill straight down to the trapped man, through solid rock.

The newspaperman moves into Minosa's trading post and starts issuing orders. He finds that the man's wife, a one-time Baltimore bar girl named Lorraine (Jan Sterling), has raided the cash register and plans to take the next bus out of town. He slaps her hard, and orders her to stay and portray a grieving spouse. He needs her for his story. Even though the film has been little seen and appeared for the first time on home video last month, it produced one of those famous hard-boiled movie lines everybody seems to have heard; ordered to attend a prayer service for her husband, Lorraine sneers, "I don't go to church. Kneeling bags my nylons."

Wilder (1906-2002) came to "Ace in the Hole" right after "Sunset Boulevard" (1950), which had 11 Oscar nominations and won three. Known for his biting cynicism and hard edges in such masterpieces as "Double Indemnity" (1944) and "The Lost Weekend" (1945), he outdid himself with "Ace in the Hole." The film's harsh portrait of an American media circus appalled the critics and repelled the public; it failed on first release, and after it won European festivals and was retitled "The Big Carnival," it failed again.

There's not a wasted shot in Wilder's film, which is single-mindedly economical. Students of Arthur Schmidt's editing could learn from the way every shot does its duty. There's not even a gratuitous reaction shot. The black-and-white cinematography by Charles Lang is the inevitable choice; this story would curdle color. And notice how no time is wasted with needless exposition. A wire-service ticker turns up there, again without comment. A press tent goes up and speaks for itself.

Although the film is 56 years old, I found while watching it again that it still has all its power. It hasn't aged because Wilder and his co-writers, Walter Newman and Lesser Samuels, were so lean and mean. The dialogue delivers perfectly timed punches: "I can handle big news and little news. And if there's no news, I'll go out and bite a dog."

That's what Tatum does with the Minosa story. Not content with the drama of a man trapped underground, Tatum discovers the mountain is an Indian burial ground and adds speculations about a mummy's curse. Soon gawkers are arriving from all over the country, and those who have arrived to exploit them: hot dog stands, cotton candy vendors, a carnival with a merry-go-round.

Meanwhile, Minosa grows weaker and depends on Tatum for his contact with the surface. The pounding drill, growing closer, tortures him. Rival newsmen complain about Tatum's role: He controls access to the rescue, the story and the wife. With every day that passes, the story grows bigger. And Tatum manufactures news on a slow day. He plunges into the cave with a priest and a doctor, and finds out from Leo about his anniversary present for the wife who despises him. It's a fur scarf. Tatum hands it to her and tells her to wear it. She hates it. He almost chokes her with it. She wears it.

Kirk Douglas (born in 1916) was and still is a ferocious competitor. Little wonder one of his first screen roles was as a boxer in "Champion" (1949). When I interviewed him for Esquire in 1969, the role of a champion was his central theme: "It doesn't matter if you're a nice guy or you're a bastard. What matters is, you won't bend!" His focus and energy as Chuck Tatum is almost scary. There is nothing dated about Douglas' performance. It's as right-now as a sharpened knife.

Tatum drives relentlessly toward his goal of money and fame, and if there's a moment when we think he might take pity on Minosa, that's just Wilder, yanking our chains. The way Tatum's thinking evolves about the trapped man is a study in subtlety of direction, writing and acting. In a lesser movie, Tatum would share our sympathy for the pathetic man. Here, he's on a parabola in that direction but wants it to intersect with the moment of his own greatest fame.

Wilder, born in Austria, a refugee from Hitler, certainly became one of America's greatest directors. But he never bought into the American dream. What he saw in Europe warned him off dreams. Although "Ace in the Hole" has always been considered one of his greatest films, its rejection by the marketplace isn't surprising: Moviegoers like crime, like suspense, like violence, but they like happy endings, and Wilder is telling them to wake up and smell the coffee.

When the film was released, the press complained about its portrait of news practices and standards, even though the story was inspired by a real media circus when a man named Floyd Collins was trapped in a Kentucky cave. Today, it is hard to imagine some segments of the press not recognizing their hunger for sensation. The same might be said of the public; after the movie was finished, the studio sold admissions to its mountain sets outside Gallup, N.M.

"Ace in the Hole" is newly available on DVD. 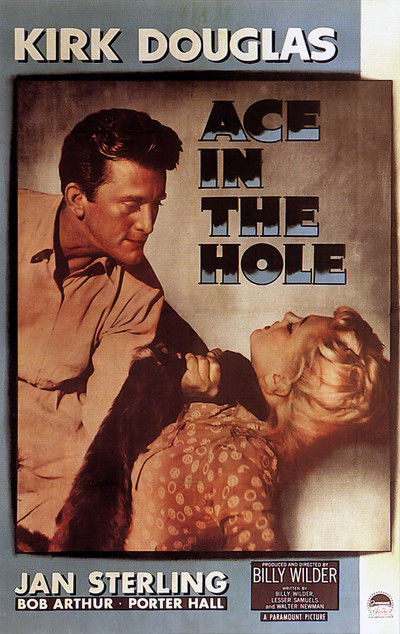