The cinematic fortunes of war

The most common form of warfare since 1945 has involved irregular resistance fighters attacking conventional forces and then disappearing back into the population. Bombs planted by civilians, often women and children, have served as deadly weapons in this war. The United States, France, Russia, Israel, Northern Ireland, South Africa and several South American states have all had their experiences with urban guerrillas.

George W. Bush complained in his first televised debate with Sen. John Kerry that he thought Saddam's army would stand and fight, but it melted away into the city streets. He blamed some of the problems in Iraq on the fact that the U.S. victory came too easily and quickly; if the lessons of other conflicts are a guide, it may be too soon to declare that victory. The army disappeared, but it didn't leave.

Gillo Pontecorvo's "The Battle of Algiers," filmed in 1965, released in late 1967, is the crucial film about this new kind of warfare. It involves the proving-ground of the emerging tactics in Algeria from 1954 to 1962, as France tried and failed to contain a nationalist uprising. Methods that were successful in Algeria would be adapted by Castro and Guevara in Cuba, by the Viet Cong, the Palestinians, the IRA and South African militants, and are currently being employed in Iraq. One conventional response has been the capture, interrogation and sometimes torture of the fighters, who are pressured to betray the names and plans of their co-conspirators.

This theory is described by a French military commander in "The Battle of Algiers": Terrorist groups are like tapeworms -- they keep reviving unless you destroy the head. That's not easy, because the groups are broken up into cells so that no member knows the names of more than a few others. As a consequence, neither side can really know how many (or how few) insurgents are involved.

"The Battle of Algiers" is "a training film for urban guerrillas," Jimmy Breslin declared on TV in 1968. Certainly it was shown by the Black Panthers and the IRA to their members, and in September 2003 the New York Times reported that the movie was being shown in the Pentagon to military and civilian experts. Times reporter Michael Kaufman wrote that Pentagon audiences were "urged to consider and discuss the implicit issues at the core of the film -- the problematic but alluring efficacy of brutal and repressive means in fighting clandestine terrorists in places like Algeria and Iraq." In short, the possibilities of torture.

Pontecorvo's film was released at the peak of anti-war sentiment in the United States, and had a surprising box-office success; it played for 14 weeks in Chicago. It was described at the time as "impartial," alternating between the stories of the Algerian National Liberation Front (FLN) and the French police and paratroopers assigned to destroy it. "Pontecorvo has taken his stance," I wrote in my 1968 review, "somewhere between the FLN and the French, although his sympathies are on the side of the Nationalists. He is aware that innocent civilians die and are tortured on both sides, that bombs cannot choose their victims, that both armies have heroes and that everyone fighting a war can supply rational arguments to prove he is on the side of morality."

True up to a point. But watching the movie again on the new Criterion DVD, I believe Pontecorvo's sympathies were clearly with the FLN. The resistance opens with FLN members walking up to French policemen in the street and shooting them dead, often in the back. Bombs are used against police strongholds. These actions are seen in silence, but when the French respond by blowing up the home of a terrorist, the score by Ennio Morricone becomes mournful as survivors pick through the debris. His score withholds sympathy for the dead police.

Pontecorvo does, however, show the French leadership in a relatively objective light. In a film that was cast almost entirely with local non-actors, he uses the Paris stage veteran Jean Martin to play Col. Mathieu, commander of paratroopers sent in to back up the police. Mathieu, himself a member of the French resistance to the Nazis, later a veteran of the French defeat in Indochina, knows a thing or two about urban warfare. He is calm, analytical, strategic in his thinking, and considers the FLN to be the enemy, not a malevolent force. As French public opinion turns against the war, he is besieged by reporters, one of whom quotes the philosopher Jean-Paul Sartre.

"Why are the Sartres always born on the other side?" Col. Mathieu complains.

Pontecorvo's film remains even today a triumph of realistic production values. Filming on location in Algiers, using the real locations in the European quarter and the Casbah (which sheltered the FLN), he achieved such a convincing actuality that he found it necessary to issue a disclaimer: There is "not one foot" of documentary or newsreel footage in his two hours of film. Everything was shot live, even riot scenes in which police battle civilian demonstrators.

He cuts back and forth between Col. Mathieu and other military and civilian leaders and a raggedy band of FLN fighters, of which the key figure may be Ali la Pointe (Braham Haggiag), a reform school boy and professional criminal who converts to the FLN after witnessing a beheading in prison. Back on the streets, Ali receives instructions (carried by a small boy) to shoot a policeman who meets daily with an Algerian informer. A woman standing outside a cafe will hand him a gun.

Ali finds the cafe, the policeman, the woman and the gun, but when he pulls the trigger, the gun is not loaded. He feels betrayed by the FLN, but the woman takes him to her contact, who explains the reasoning: They did not know if they could trust him. Ali might have been recruited by the French in prison. The reason they told him to shoot the cop instead of the informer is that, if he were a police stooge, the police wouldn't object to the murder of a civilian, but they wouldn't let an informer shoot a French policeman. By pulling the trigger, Ali has symbolically committed a murder, earning his entry into the FLN.

This reasoning is chilling, and carries a terrible weight of logic. The strength of "The Battle of Algiers," the reason it is being viewed in the Pentagon 35 years after its making, is that it is lucid and dispassionate in its examination of the tactics of both sides. It shows the French setting up roadblocks and checkpoints between the Casbah and the European quarter. Then it follows three women, one with a child, who walk right past the checkpoints with bombs in their purses. One woman plants her bomb in a cafe and then, in a disturbing scene, watches the customers eating, drinking, smoking and talking -- customers who will soon be dead. The parallel with bombings in Israel, the U.K. and Iraq is prophetic and chilling.

Col. Mathieu does his job well. His chart of FLN cells has squares that are gradually filled in until, with the final defeat of Ali and three others, trapped in their hiding place, he declares victory. The FLN has been eliminated. Two years later, the film notes, "for no particular reason that anyone could explain," the uprising began again as mobs poured out of the Casbah and overwhelmed the police. In 1962, the French granted Algeria its freedom.

What lessons a modern viewer can gain from the film depends on who is watching and what they want to see. Those who study the French tactics should note that they failed. Although the American use of torture at Abu Ghraib has been credited, at least, with producing the names and locations of many enemy fighters, the scale of urban warfare in Iraq is escalating. A few days before I wrote this review, some 35 children were killed by a bomb while being given candy by Americans. The moral paradox is that many Iraqis will blame the deaths on us, because if we were not there, the bombing would not have taken place. Certainly the bombers were the murderers. But "The Battle of Algiers" shows now, as it did when it was made, that for nationalist resistance movements, the end justifies the means. President Bush said something in the debate that this film abundantly illustrates: Fighting terrorism is hard work.

My 1969 interview with Gillo Pontecorvo in South America, on the day he learned he was nominated for an Oscar, is online at rogerebert.com. "The Battle of Algiers" is newly available in a restored print on a three-disc Criterion edition, including documentaries, and interviews with Pontecorvo, terrorism experts and film directors like Oliver Stone, Mira Nair, Steven Soderbergh and Spike Lee. 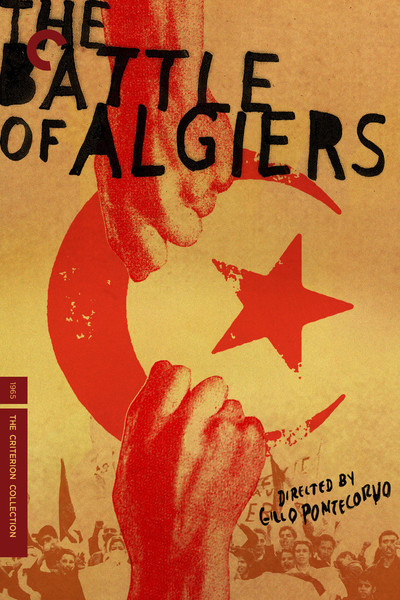