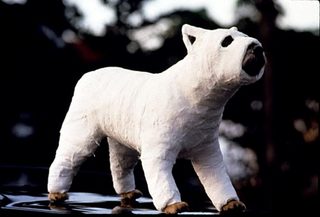 My MSN Movies gallery feature article about Great Movie Underdogs (i.e., dogs whose proper names are not in the titles), is live. And, after the jump, the answers to last week's movie dog quiz -- and a couple of delicious bonus treats.

My dog Edith does not much like dog movies. At least I don't think she does. Whenever a canine appears on our 55-inch HDTV screen, or any of the surround speakers, she lunges, barking, growling, whining and emitting other noises that sound like a wounded vacuum or a gargling siren.

If Edith were a bit less excitable and territorial, if she were better able to maintain a critical distance, she would appreciate how many fine screen performances have been given by members of her species, if not of her particular mixed-breed-of-color. [...]

Best Suspense Dog: The Pit Bull in "No Country for Old Men"

The first rule of this list is: No Dead Dogs. The second rule is: No Dead Dogs. And the third rule is: No Bloody Dog Fights and That Means You Michael "Sicko" Vick. There will be no "Amores Perros" in this house. And no "Funny Games," either, no matter what language it's in, thank you very much, Mr. Haneke. But there's always room for an exception. Case in point: the leaping, swimming, bloodthirsty pit bull in Joel and Ethan Coen's "No Country for Old Men."

In terms of emotion (mostly terror) and sheer adrenaline, this performance surpasses even Beatrice Straight's five-minute and 40-second Best Supporting Actress Oscar-nabbing turn in "Network." And it's about five minutes shorter. This dog relentlessly pursues its prey (Josh Brolin) downstream with the focus and dogged determination of Tom Cruise running and running and running in "The Firm," but with a more delicate sense of humor. Every time I see "NCFOM" I want to leap up and give this dog a standing ovation, and I would if I wasn't completely out of breath by the end of the scene.

The flawlessly funny choreography of Puffy's fight sequence with Ben Stiller is all the better because you can obviously tell when there's a stunt dog (i.e., a stuffed dog) involved. That makes it funnier because: 1) they don't even try to make the "dog" look real; and 2) you are free to laugh because you are reassured that no animals were harmed in the shooting of this scene. Puffy the border terrier has learned some of his chops from silent slapstick comedy, which is exactly how this scene plays, only with a lot of yelling and screaming and growling added to the mix.

One of Puffy's celebrated moves comes from Charlie Chaplin's 1915 Essanay short "The Champion," wherein Charlie's boxer sinks his teeth into the seat of a rival pugilist and gets swung around the ring. Since "Mary" is a penis-centric Farrelly Brothers picture, the gag is, well, reversed: Puffy bites Stiller's crotch and gets taken for a wild spin.

My thanks to those who participated in hazarding answers to last week's dog quiz (which you can revisit here). Some of these are also discussed in the above article. (Dog names are linked to corresponding MSN Movies gallery pages; cartoon titles are linked to full-length online 'toons.)

Main page: Asta (who else?) from "The Thin Man" series, "The Awful Truth," "Bringing Up Baby."

3) Lucy in Kelly Reichardt's "Wendy and Lucy" (2008). Yes, this was a trick because, obviously, Lucy's name is in the title, but I didn't know that when I went to see the movie in Toronto.

4) The dog who looks quizzically at Rug Daniels in Joel and Ethan Coen's "Miller's Crossing" (1990).

5) The unnamed title character from Samuel Fuller's "White Dog" (1981), which will make its American DVD debut on Criterion in December.

7) The subject of an earlier post, from Jerzy Skolimowski's "Moonlighting" (1982). OK, really the cat is the star, but here's the whole shot itself:

17) The dog from Roland Emmerich's "Independence Day," aka "ID4" (1996), of whom Salon.com movie critic Scott Rosenberg memorably wrote: "The sequences showing the leveling of Los Angeles, New York and Washington, D.C. have the brittle, shiny fakeness of computer-generated imagery; but even if they looked utterly convincing, the deaths of millions of civilians here carry far less emotional impact than the survival of a single pet dog." (BTW, I tried to watch "Independence Day," and it's even more indigestible than I remembered. Plus, the effects -- which were once impressive amidst all this silliness -- look terrible.)

18) Nazzi (uncredited) from John Waters' "Pink Flamingos" (1972), who provides the poop that made Divine the world's most glamorously filthy movie star.

And now, a couple of bonus pups. Recognize these? 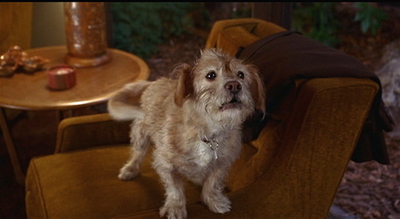 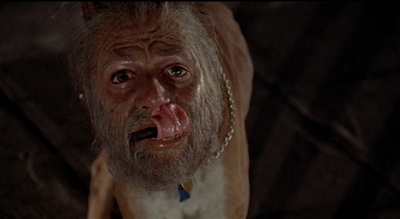