A winter afternoon. A man walks down a muddy village backstreet with his shoulders hunched against the chill, accompanied by what could be industrial noise or a string score. Whatever it is, it evokes tension and anxiety. The catches the attention of a passing German Shepherd, who strains on its leash to keep an eye on him -- all the more so when the man attempts to conceal himself around a corner. In a small general store, he buys an axe. The clerk wraps the blade neatly in crisp brown paper. The camera tracks a slow-moving car that is being pushed along by several other men, the "driver" looking behind him through an open door. The man places the axe against his side, facing us, to shield it from their view.

What are we watching? 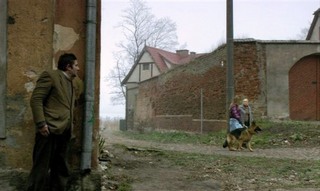 Later, a man enters a flat. The door of a small refrigerator is ajar, the light glowing inside. The man grabs an object from a white plate sitting on top of the fridge. It is a woman's black shoe.

So, what is this? A horror movie? A crime thriller? A macabre mystery? Sure. But I think a more accurate genre description would be romantic comedy.

Not long into Jerzy Skolimowski's "Four Nights with Anna," I noticed that my own eyes were as wide as they could get, as if I couldn't take in enough of what the movie was showing me. Again and again I found myself craning my neck, as if that would help me see beyond the edge of the frame before the camera itself got there. What I mean to say is: This is the most riveting, absorbing, tantalizing movie I've seen (and heard) in quite a while.

I mentioned "the camera" in my description above, because our awareness of how it's placed, what its showing us and what it's concealing (from the audience watching the movie and from the eyes of those visible within the frame or not visible outside it) is central to the experience of the movie. This one joins the ranks of the great pictures about voyeurism, about seeing through a lens, a frame, a window, a pair of eye sockets. 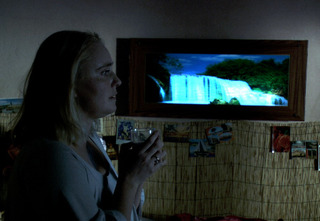 Let me state up-front that am temperamentally attuned to the oblique approach and droll absurdity that courses through many Eastern European movies (especially Polish ones), and this one sent me into my own private Polish movie heaven in, oh, the second or third shot and I stayed there until the final one.

Skolimowski is probably best known for his muted gray comedy "Moonlighting" (1982) starring Jeremy Irons, and for playing Naomi Watts' cranky uncle in last year's David Cronenberg film "Eastern Promises." "Four Nights With Anna" (even the title is a little cockeyed -- accurate, but not what you think) could almost be a sequel to Skolimowski's 1971 masterpiece "Deep End," which was recently re-released after many years of unavailability. That movie's tagline was "If you can't have the real thing-- you do all kinds of unreal things." Yeah, that works for this one, too.

The source of the compelling mystery and suspense of "Four Nights With Anna" is its main character, Okrasa (Artur Steranko). Moment by moment we keep wondering: What is happening to him? What is he doing? What does he want? What is he afraid of? What is his relationship to others? What is the chronology of incidents? How much of what we're seeing is filtered through his experience, either in the present or in his memory?

And yet there's nothing "hard to follow" about Skolimowski's film because it so thoroughly engages our curiosity, our anticipations. Every image is a perceptual teaser. What is Okrasa seeing? What are we seeing? He tells a woman that he is seeing somebody. He's telling the truth, but what, exactly, does he think he's saying?

Like most of the films I've seen in this year's festival (notably "Dernier Maquis," "Hunger," "Burn After Reading"), "Four Nights With Anna" features an evocative sound design that not only complements the visuals but extends them into unexpected dimensions that excite the senses. Skolimowski's movie -- his first in 17 years, as astounding as that seems -- is also suffused with an eerie, disturbing score by Michal Lorenc that is as essential to the film's method and atmosphere as its foggy, deep-gray winter imagery. You can't say that about most movie soundtracks, even in these days of sophisticated multi-track technology. 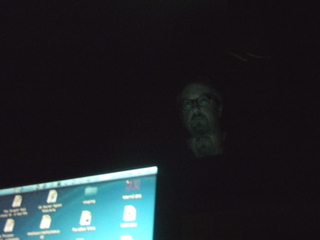 Above: Your ghostly insomniac correspondent, looking up from his MacBook at 3:50 am in a Toronto hotel room a night or two ago.