William Powell is to dialogue as Fred Astaire is to dance. His delivery is so droll and insinuating, so knowing and innocent at the same time, that it hardly matters what he's saying. That's certainly the case in "The Thin Man" (1934), a murder mystery in which the murder and the mystery are insignificant compared to the personal styles of the actors. Powell and Myrna Loy co-star as Nick and Nora Charles, a retired detective and his rich wife, playfully in love and both always a little drunk.

Nick Charles drinks steadily throughout the movie, with the kind of capacity and wit that real drunks fondly hope to master. When we first see him, he's teaching a bartender how to mix drinks ("Have rhythm in your shaking ... a dry martini, you always shake to waltz time"). Nora enters and he hands her a drink. She asks how much he's had. "This will make six martinis," he says. She orders five more, to keep up.

Powell plays the character with a lyrical alcoholic slur that waxes and wanes but never topples either way into inebriation or sobriety. The drinks are the lubricant for dialogue of elegant wit and wicked timing, used by a character who is decadent on the surface but fundamentally brave and brilliant. After Nick and Nora face down an armed intruder in their apartment one night, they read about it in the morning papers. "I was shot twice in theTribune," Nick observes. "I read you were shot five times in the tabloids," says Nora. "It's not true," says Nick. "He didn't come anywhere near my tabloids."

After a prologue set three months earlier, most of the movie takes place over the holiday season, including cocktail parties on Christmas Eve and Christmas Day, and the exposure of the killer at a dinner party sometime around New Years' Eve. The movie is based on a novel by Dashiell Hammett, one of the fathers of noir, and it does technically provide clues, suspects and a solution to a series of murders, but in tone and intent it's more like an all-dialogue version of an Astaire and Rogers musical, with elegant people in luxury hotel penthouses and no hint of the Depression anywhere in sight.

"The Thin Man" was one of the most popular films of 1934, inspired five sequels, and was nominated for four Oscars (best picture, actor, direction and screenplay). Yet it was made as an inexpensive B-picture. Powell and Loy had been successful together earlier the same year in "Manhattan Melodrama" (the last film John Dillinger ever saw), and were quickly cast by MGM in this crime comedy that was filmed, incredibly, in only two weeks. The quick shooting schedule was possible because there are very few sets and negligible exteriors, because there is much dialogue and little action, and because the director, W. S. Van Dyke, was known for sticking to a schedule. That "The Thin Man" cost so little and looks so good is possibly because the interiors are simple and elegant, and the black and white photography flatters the loungewear and formalwear worn by a great-looking cast (which in addition to Powell and Loy, included Maureen O'Sullivan and a young Cesar Romero). And there is a kind of grace in the way the 6-foot Powell hovers protectively over the 5-6 Loy (or sometimes simply leans as if blown in her direction).

Although Dashiell Hammett was known for hard-boiled fiction, and John Huston's 1941 film of Hammett's The Maltese Falcon was one of the first examples of film noir, "The Thin Man" is essentially a drawing-room comedy with dead bodies. The plot is so preposterous that no reasonable viewer can follow it, and the movie makes little effort to require that it be followed. Nick Charles typically stands in the midst of inexplicable events with a drink in his hand, nodding wisely as if he understands everything and is not about to share. When a reporter asks him, "Can't you tell us anything about the case?" Nick replies: "Yes. It's putting me way behind in my drinking."

Briefly, the film involves the mysterious disappearance of an inventor (Edward Ellis); the concern of his daughter (O'Sullivan), who is an old friend of Nick and Nora; the greed of the inventor's ex-wife (Minna Goimbell); the even greater greed of her gold-digging husband (Romero); the suspicious motives of the inventor's mistress (Natalie Moorhead), and various other thugs, gunsels, cops, reporters and the untiring cast of partygoers who turn up nightly at the Charles' suite for free drinks.

One of the movie's charms is the playfulness with which Nick and Nora treat each other, and life. During one ostensibly serious scene, Nick pretends to find a piece of lint on her blouse, and then flicks her on the nose when she looks down; she jabs him in the side; he pretends to be about to sock her, and then they both try to put on serious faces. On Christmas morning, Nick tests the new air-rifle he got as a present by firing at the balloons on their Christmas tree. Nick throws a dinner party for all of the suspects, with plainclothes cops as waiters, and Nora tells one of them: "Waiter, will you serve the nuts? I mean, will you serve the guests the nuts?"

The movie's only real skullduggery comes when Nick goes on a midnight prowl through the inventor's laboratory, and even then the real sleuthing is done by Asta (Skippy), the couple's high-spirited terrier. Nick and Nora included him in all of their activities, and Asta became one of the most famous movie dogs of his time, in part through his ability to shield his eyes with his paws when life grew too disturbing to contemplate.

Assuming as we must that "The Thin Man" is not about a series of murders and their solution (that entire mechanism would be described by Hitchcock as the MacGuffin), what is it about? It is about personal style. About living life as a kind of artwork. Of the early lives of Nick and Nora we learn little, except that he was once a famous San Francisco detective and retired after marrying Nora. As Nick explains vaguely to a friend, her father left her a small-gauge railroad and "oh, a lot of other things," and he looks after them. As a consequence, Nick and Nora have a lot of money and spent their time traveling, seeing old friends, making new ones, and drinking pretty much all day long.

At one point in the film, when Nora wakens Nick in the middle of the night, he immediately pours himself a drink and one for her, and then as she leaves the room he greedily drinks from her glass. They are alcoholics in any realistic definition of the term, but not in the terms of the movie, because their drinking has no particular effect on themselves or the plot. It is simply a behavior, like smoking, that gives them something to do with their hands, something to talk about, and an excuse to move around the room. Even when Nora appears with an ice bag on her head, it looks more like clowning than like a hangover.

Myrna Loy was a delightful foil to Powell, but in this film she is essentially just his playmate; Powell dominates the picture with his deep, rich voice, his gliding, subtly unsteady physical movements, and his little mustache that he hopes makes him look more grownup than he feels. For audiences in the middle of the Depression, "The Thin Man," like the Astaire and Rogers musicals it visually resembles, was pure escapism: Beautiful people in expensive surroundings make small talk all the day long, without a care in the world, and even murder is only an amusing diversion.

Powell's career began on the stage in 1912. He worked in silent films from 1922 and in talkies from their birth until 1955, when his last role was "Doc" in "Mister Roberts." He was nominated for best actor for this film, the wonderful "My Man Godfrey" (1937) and "Life with Father" (1947). But he never won an Oscar. Powell lived until 1984, when he was 92, and was fit and active until toward the end. All through the 1960s and 1970s his fans urged the Motion Picture Academy to give him an Oscar for lifetime achievement, but the Academy never did. To see "The Thin Man" is to watch him embodying a personal style that could have been honored, but could never be imitated. 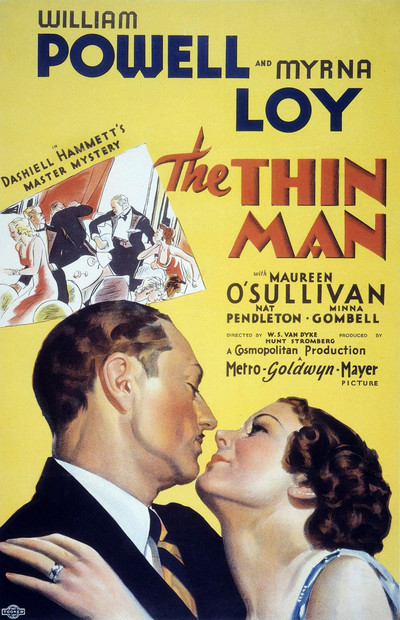