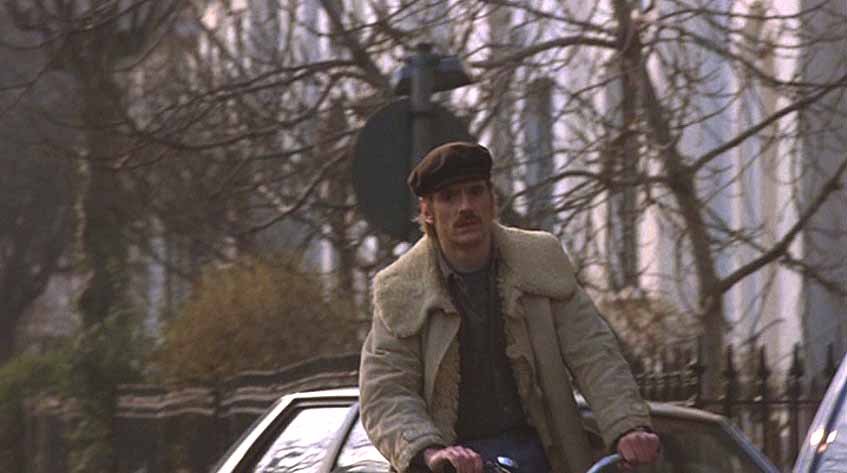 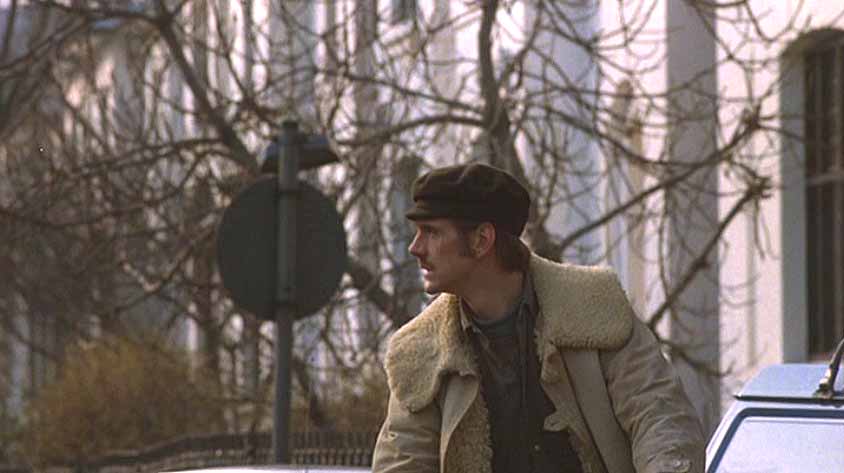 Here's a prime example of the kind of cross-pollination on the Internet (and between blogs most of all) that I find so exciting and rewarding. I first learned from Andy Horbal at the movie blog No More Marriages! that Rob at A Film Odyssey had started a discussion about Extended Takes, inspired in part by the ever-ongoing Opening Shots Project here at Scanners. I think I first heard about Andy's blog from girish, or possibly Dennis at Sergio Leone and the Infield Fly Rule, through whom I also discovered such diverse movie-obsession sites as Zach Campbell's Elusive Lucidity," Aquarello's Strictly Film School, Filmbrain's Like Anna Karina's Sweater, That Little Round-Headed Boy, Eric Henderson's when canses were classeled..., Tom Sutpen's If Charlie Parker Was a gunslinger... and many others, some of which you will find listed in the right hand column down the side of this blog. 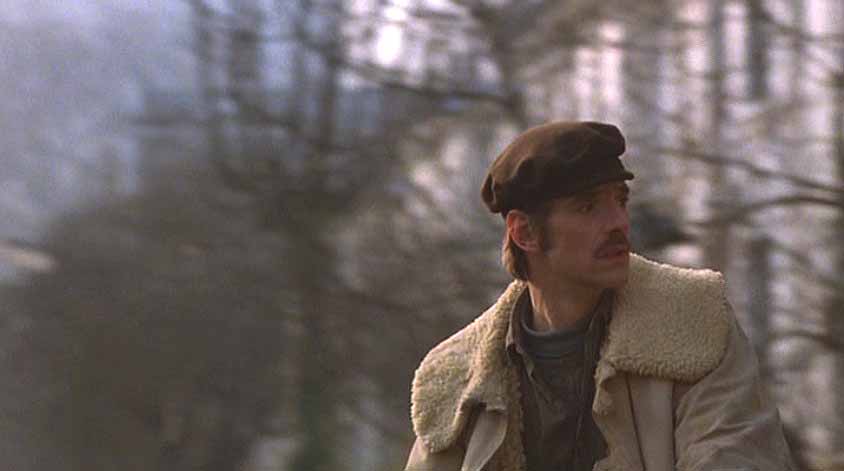 Anyway, so as I told Rob in e-mail, I wanted to respond here with some screen grabs of one of my favorite long takes, and then you over to his place to contribute your own favorites and participate in the discussions. (The problem being, I don't know how to post screen shots in Comments fields -- or if it's even possible -- and this is one you just gotta see, although too few have.) 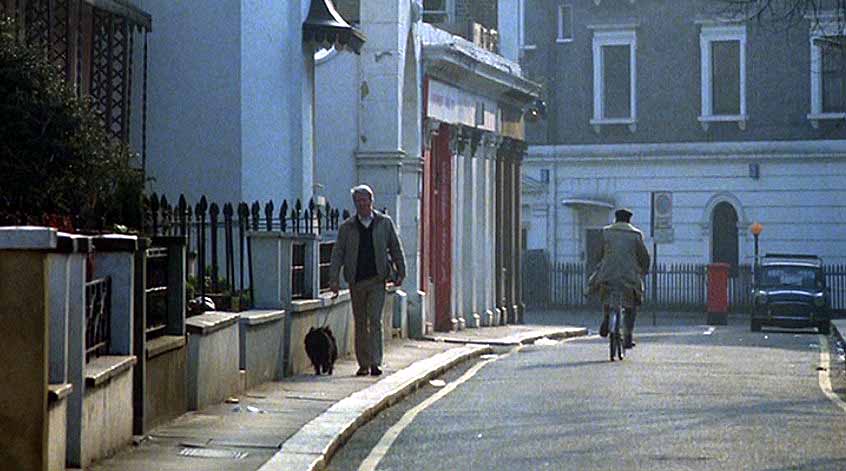 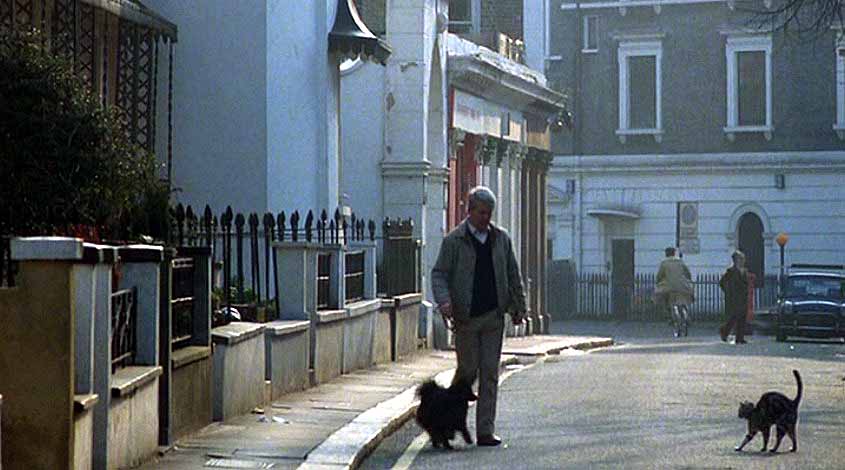 The movie is Jerzy Skolimowski's "Moonlighting" (1982), a dark (and dank) comedy about a group of Polish construction workers, led by Nowak (Jeremy Irons), who travel London to do a little off-the-books remodeling at their boss's flat. Political unrest in Poland makes Nowak's job as foreman all the more tricky; he withholds information from them, and tries to pretend everything is normal, while carrying an ever-increasing load of fear, guilt and moral responsibility. Ten years later, the Soviet system had collapsed, and you get an eerie sense of why from this movie. 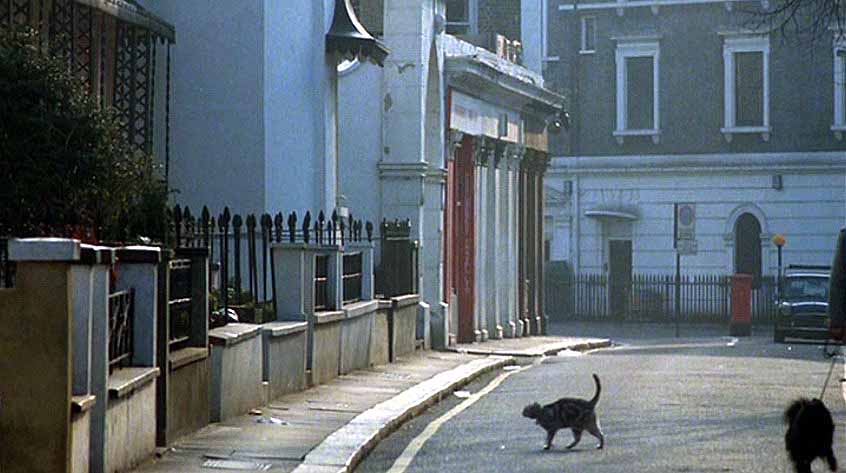 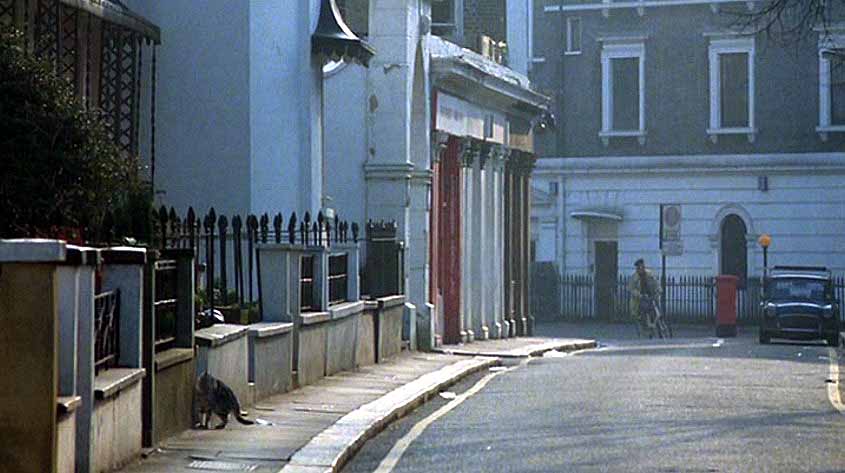 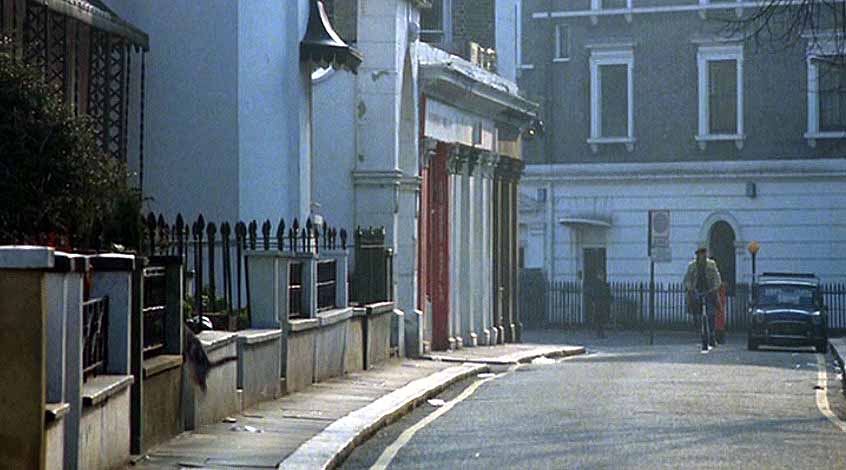 The shot (from a stationary camera; no dollying) begins with Nowak riding his bike toward us, then turning around and riding away. No reason is given for the reversal (the pivotal moment is a pause, almost in close-up), but we know certain decisions are weighing heavily on Nowak's mind. He heads down the road, and we see a man walking a black dog on the sidewalk. The man and dog begin to cross the street and, just as Nowak is about to disappear around a corner in the distance... a cat jumps into the frame, arching its back at the dog. Man and (reluctant) dog cross to the right; the cat freezes, then continues, bristling, in the opposite direction, left. The cat pauses on the sidewalk, looking at a retaining wall. Just then, Nowak reappears at the end of the street, riding back toward the camera again. The cat jumps. End of shot.

This shot captures the restless, tortuous tensions at work in Nowak's mind -- and in one moment expresses why I love Polish cinema so very deeply. It's all in the details, the composition, the timing. The absurdity. Moments like this have taught me how to apprehend the world; or, at least, reinforced my existing view -- watching Polanski or Kieslowski or Zanussi or Skolimowski has been like coming home, or finding my long-lost twin.

All the time I catch glimpses of weird little things as I'm walking down the street, or through my windshield or in my rear-view mirror when I'm driving, that make me smile or laugh or do a double-take or give me a little chill. And I think: I've got to put that in a movie. (Of course, I promptly forget most of these things, but they enhance my enjoyment of life immensely.)

So, either you find this shot funny or you don't. I gasped with delight the first time I saw it and chuckled for the next few minutes. Maybe you find it simply odd (which it is!) or a little eerie (ditto) or just mundane (instead of inspired). But to me, it's the essence of movies. Movies!