Umberto is upright, neat, exact, and the cut of his clothes shows that he was once respectable. Now he is a retired civil servant on a fixed income that is not enough to support him, not even in his simple furnished room, not even if he skips meals. He and his dog are faced with eviction by a greedy landlady who would rather rent his room by the afternoon to shame-faced couples.

Vittorio De Sica's "Umberto D" (1952) is the story of the old man's struggle to keep from falling from poverty into shame. It may be the best of the Italian neorealist films--the one that is most simply itself, and does not reach for its effects or strain to make its message clear. Even its scenes involving Umberto's little dog are told without the sentimentality that pets often bring into stories. Umberto loves the dog and the dog loves him because that is the nature of the bond between dogs and men, and both try to live up to their side of the contract.

The film is told without false drama. Even when Umberto calls the ambulance and has himself taken to the hospital, there is no false crisis, no manufactured fear that he will die. Later, when Umberto considers suicide, he goes about it in such a calm and logical way that we follow his reasoning and weigh the alternatives along with him, instead of being manipulated into dread. "Umberto D" avoids all temptations to turn its hero into one of those lovable Hollywood oldsters played by Matthau or Lemmon. Umberto Domenico Ferrari is not the life of any party but a man who wants to be left alone to get on with his business. In his shoes we might hope to behave as he does, with bravery and resourcefulness.

The movie follows its hero as he faces the possibility that he may lose his room and be turned into the streets to beg. He has always paid his bills and this prospect horrifies him. The opening shot shows him joining a street demonstration in Rome, as old men seek an increase in their meager state pensions. Umberto marches in the protest, but is not a joiner, and indeed when the police disperse the crowd he is angry not at the cops, but at the organizers: "They didn't even get a permit!" He smuggles his little dog Flag into a dining hall where the old are given free lunches, and slips his food under the table for the dog, while tricking the stern welfare workers with some quick plate-switching. He tries to sell his watch, but everyone has a watch they want to sell.

We gradually learn the outlines of his life. He lives in a room infested with ants, which the landlady will do nothing about. Adulterous couples leave his room just as he is returning to it. His friend in the rooming house is Maria the maid, who is pregnant. She isn't sure if the father is the boy from Florence, or the one from Naples. Umberto is not offended that she sleeps with more than one man. He is beyond being surprised by the trouble sex can bring, cares about her as she cares about him, because they are both good people in a bad place.

Because his dog has needs, Umberto has needs. He must care for Flag. He is truthfully sick when he arranges to go to the hospital, but not that sick, and the trip is mostly to get a few days of clean sheets and good meals. He arranges for the maid to take care of the dog while he's gone, and even stages a pantomime with a stick and a ball to distract the dog from following him.

Later he finds that the dog ran out the apartment door, maybe to look for him, and is lost. There is a scene of documentary simplicity, in which Umberto seeks Flag at the dog pound, and learns how unwanted dogs are put to death. He peers helplessly into a cage so filled with barking, scrambling dogs that he cannot see for sure if Flag is even there. When he finds the dog, note how De Sica shows them greeting one another. This whole passage is all the more affecting because the movie doesn't milk it for tears, but simply shows it happening.

Neorealism was an Italian movement, born in wartime, continuing through the 1950s, which believed that films should be made close to the surface of everyday life and played by non-professionals who embodied their characters. "Umberto D" is one of the most successful demonstrations of that theory. The old man is played by Carlo Battisti, then 70, a university lecturer who had not acted before.

De Sica (1901-1974) said his method was to form a mental image of a character while working on the screenplay with his longtime collaborator Cesare Zavattini. "Until I can find the man, woman or child who fits the figure I see in my mind's eye," he wrote, "I do not begin." With "Umberto D," "before fortune smiled on me once again, I had searched Rome, Naples, and other cities and had lingered for hours, for days even, in those places where I was most likely to find the kind of old-age pensioner who was the hero of my film...but I had not yet mettheperson who from the first had smiled at me with sorrowful dignity from the pages of the script."

Sorrowful dignity is exactly what Battisti embodies for Umberto. He is observant, understanding, sympathetic. He doesn't rail against the injustice of the world, but is simply determined to defend the corner he occupies with his dog.

Because Umberto doesn't talk much with other characters, we have to determine his thoughts by how he looks and what he does, and there is a masterful scene in which he considers begging in the street, and decides against it. Note the timing of this sequence. With a slightly different twist, it could shot-by-shot be a comic bit for Chaplin's Little Tramp, but De Sica holds it to understated pathos. Umberto watches a successful beggar. He puts out his own palm, halfway, not really committing himself. As a man is about to give him money, he turns the hand over, as if testing for rain. He cannot beg. He thinks. He gives his hat to his dog, which sits up and holds it in its mouth, while Umberto hides nearby. No, this will not work either: He will not demean his dog by making it do something he would not do.

The stages by which Umberto arrives at the idea of suicide and then is drawn away from it are among the best in the film. His dog is central to the action--both because he will not abandon it by his own death, and because the dog refuses to leave his side. It is the fact of the dog's love that saves him, because he cannot ignore it. One great scene takes place when Umberto takes the dog to a couple that boards unwanted dogs. It's clear they're in it only for the money, and that many of their pets don't have long to live. Umberto offers them money to take Flag, but their eyes tell him it is not enough to support the dog for long. Leaving, he hides under a bridge, but the dog finds him, and again we're reminded of a sequence that could be in a Chaplin film, but has been toned down to quiet sadness.

"Umberto D" tells what could be a formula story, but not in a formula way: Its moments seem generated by what might really happen. A formula film would find a way to manufacture a happy ending, but good fortune will not fall from the sky for Umberto. Perhaps his best luck is simply that he has the inner strength to endure misfortune without losing self-respect. It is said that at one level or another, Chaplin's characters were always asking that we love them. Umberto doesn't care if we love him or not. That is why we love him. 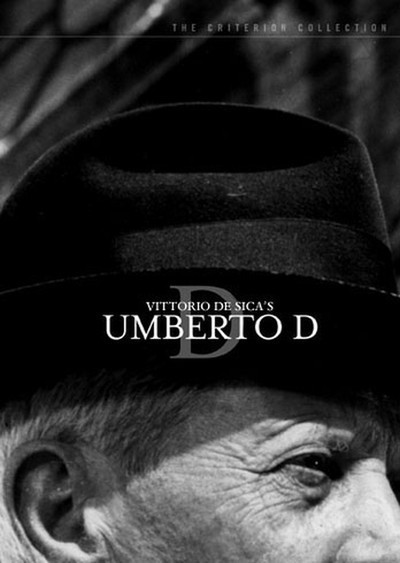