The "Best" Non-English-Language Films (Round 1) 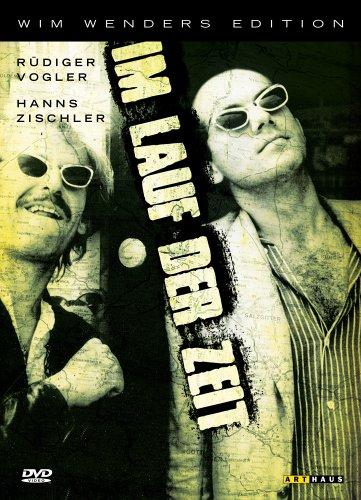 Wim Wenders' "Kings of the Road" (or literal English translation: "In the Course of Time"). You may recognize the poster image from outside the theater in which "Duck Soup" is playing in Woody Allen's "Hannah and Her Sisters." This movie can also save your life.

An ad hoc bunch of 51 online movie enthusiasts (online movie critics, bloggers, et al.), organized by Edward Copeland, the eponymous proprietor of "Edward Copeland on Film," recently composed our unordered lists of up to 25 most significant (or enduring or even favorite) "foreign-language" talkies.

Eduardo (as he might be known in, say, Mexico or Spain or Uruguay or Nicaragua or Puerto Rico) took on the gargantuan task of tabulating the ballots and coming up with the initial list of 122 nominees. As he explains:

I set a few guidelines for eligibility: 1) No film more recent than 2002 was eligible; 2) They had to be feature length; 3) They had to have been made either mostly or entirely in a language other than English; 4) Documentaries and silent films were ineligible, though I made do lists for those in the future if this goes well. In all, 434 films received votes, not counting those that had to be disqualified for not meeting the criteria.

In order to make the final ballot, films had to receive at least three "votes." I'm happy that most of my initial choices made the finals. And there were five I've never seen, so I have these to look forward to: Elem Klimov's "Come and See," Sergio Corbucci's "The Great Silence" (a spaghetti western), Wong Kar-Wai's "In the Mood For Love," Bela Tarr's 7.5-hour "Satantango," and Hayao Miyazaki's anime "Spirited Away." (And I've never made it all the way through "Amelie" or "Chungking Express.")

This exercise also reminded me of a bunch of movies I need to re-watch, because it's been too long (at least 20 years) and I don't remember them very well, including: Jacques Rivette's "Celine and Julie Go Boating" (always hard to see, but available on Region 2 DVD, at least), Carl Theodor Dreyer's "Days of Wrath," Luchino Visconti's "The Leopard," Kenji Mizoguchi's "The Story of the Late Crysanthemums" (and, for that matter, "The Life of Oharu," which deserved to be on the list and which I have on import DVD), and Edward Yang's "Yi Yi" (which I've been meaning to revisit since his untimely death).

Best of all, the list serves as a reminder that the vast majority of these films, available on DVD, are easier to see now than they have ever been since they were made! Most are just as easy to borrow from NetFlix as "Wild Hogs."

Meanwhile, if any of the participants -- or any readers -- would like to publish their own lists, please feel free to do so in comments! I'll show you mine if...

I limited my own choices to one title per director, and chose not to vote for a series of films or episodes (like Fassbinder's "Berlin Alexanderplatz" or Kieslowski's "Three Colors Trilogy" [I narrowed it down to "Red"] or "The Decalogue"). It wasn't as idiosyncratic a list as I might have liked, but I was trying to get my choices on the final list of candidates (although I did go for Truffaut's "The Green Room," which I honestly didn't think two other people would vote for).

My list (in no order whatsoever that I can detect -- except that the two most recent ones were the last I squeezed in):

Seems like a pretty reasonable, accessible list to me! Remember that this was winnowed down from at least a hundred titles I wanted to consider. I was saddest that Chabrol's "Le Boucher" didn't make the cut -- in part because I really thought it had a chance (unlike Zanussi's "A Year of the Quiet Sun" or Renoir's "French Can-Can," which I figured others would overlook). The film I'm most surprised is not on the final list: Roman Polanski's "Knife in the Water."

Of the final candidates, only a few seem to me absolutely out of the question -- because they're so trite/light, or not even close to their directors' best work, or because I don't think the director has done any work worthy of this caliber. Maybe later I'll tell you which ones I'm thinking of, but you can probably guess if you've been reading Scanners for a while...