The horror of the faces: That is the overwhelming image that remains from a recent viewing of the restored version of “M,” Fritz Lang's famous 1931 film about a child murderer in Germany. In my memory it was a film that centered on the killer, the creepy little Franz Becker, played by Peter Lorre. But Becker has relatively limited screen time, and only one consequential speech--although it's a haunting one. Most of the film is devoted to the search for Becker, by both the police and the underworld, and many of these scenes are played in closeup. In searching for words to describe the faces of the actors, I fall hopelessly upon “piglike.”

What was Lang up to? He was a famous director, his silent films like "Metropolis” worldwide successes. He lived in a Berlin where the left-wing plays of Bertolt Brecht coexisted with the decadent milieu re-created in movies like "Cabaret.” By 1931, the Nazi Party was on the march in Germany, although not yet in full control. His own wife would later become a party member. He made a film that has been credited with forming two genres: the serial killer movie and the police procedural. And he filled it with grotesques. Was there something beneath the surface, some visceral feeling about his society that this story allowed him to express?

When you watch "M,” you see a hatred for the Germany of the early 1930s that is visible and palpable. Apart from a few perfunctory shots of everyday bourgeoisie life (such as the pathetic scene of the mother waiting for her little girl to return from school), the entire movie consists of men seen in shadows, in smokefilled dens, in disgusting dives, in conspiratorial conferences. And the faces of these men are cruel caricatures: Fleshy, twisted, beetle-browed, dark-jowled, out of proportion. One is reminded of the stark faces of the accusing judges in Dreyer's “Joan of Arc,” but they are more forbidding than ugly.

What I sense is that Lang hated the people around him, hated Nazism, and hated Germany for permitting it. His next film, "The Testament of Dr. Mabuse” (1933), had villains who were unmistakably Nazis. It was banned by the censors, but Joseph Goebbels, so the story goes, offered Lang control of the nation's film industry if he would come on board with the Nazis. He fled, he claimed, on a midnight train -- although Patrick McGilligan's new book,Fritz Lang: The Nature of the Beast, is dubious about many of Lang's grandiose claims.

Certainly "M” is a portrait of a diseased society, one that seems even more decadent than the other portraits of Berlin in the 1930s; its characters have no virtues and lack even attractive vices. In other stories of the time we see nightclubs, champagne, sex and perversion. When "M” visits a bar, it is to show closeups of greasy sausages, spilled beer, rotten cheese and stale cigar butts.

The film's story was inspired by the career of a serial killer in Dusseldorf. In "M,” Franz Becker preys on children -- offering them candy and friendship, and then killing them. The murders are all offscreen, and Lang suggests the first one with a classic montage including the little victim's empty dinner plate, her mother calling frantically down an empty spiral staircase, and her balloon--bought for her by the killer--caught in electric wires.

There is no suspense about the murderer's identity. Early in the film we see Becker looking at himself in a mirror. Peter Lorre at the time was 26, plump, baby-faced, clean-shaven, and as he looks at his reflected image he pulls down the corners of his mouth and tries to make hideous faces, to see in himself the monster others see in him. His presence in the movie is often implied rather than seen; he compulsively whistles the same tune, from "Peer Gynt,” over and over, until the notes stand in for the murders.

The city is in turmoil: The killer must be caught. The police put all their men on the case, making life unbearable for the criminal element ("There are more cops on the streets than girls,” a pimp complains). To reduce the heat, the city's criminals team up to find the killer, and as Lang intercuts between two summit conferences -- the cops and the criminals -- we are struck by how similar the two groups are, visually. Both sit around tables in gloomy rooms, smoking so voluminously that at times their very faces are invisible. In their fat fingers their cigars look fecal. (As the criminals agree that murdering children violates their code, I was reminded of the summit on drugs in "The Godfather.”)

"M” was Lang's first sound picture, and he was wise to use dialogue so sparingly. Many early talkies felt they had to talk all the time, but Lang allows his camera to prowl through the streets and dives, providing a rat's-eye view. One of the film's most spectacular shots is utterly silent, as the captured killer is dragged into a basement to be confronted by the city's assembled criminals, and the camera shows their faces: hard, cold, closed, implacable.

It is at this inquisition that Lorre delivers his famous speech in defense, or explanation. Sweating with terror, his face a fright mask, he cries out: "I can't help myself! I haven't any control over this evil thing that's inside of me! The fire, the voices, the torment!” He tries to describe how the compulsion follows him through the streets, and ends: "Who knows what it's like to be me?”

This is always said to be Lorre's first screen performance, although McGilligan establishes that it was his third. It was certainly the performance that fixed his image forever, during a long Hollywood career in which he became one of Warner Bros.' most famous character actors ("Casablanca,” "The Maltese Falcon,” "The Mask of Dimitrios”). He was also a comedian and a song-and-dance man, and although you can see him opposite Fred Astaire in "Silk Stockings” (1957), it was as a psychopath that he supported himself. He died in 1964.

Fritz Lang (1890-1976) became, in America, a famous director of film noir. His credits include "You Only Live Once” (1937, based on the Bonnie and Clyde story), Graham Greene's "Ministry of Fear” (1944), "The Big Heat” (1953, with Lee Marvin hurling hot coffee in Gloria Grahame's face) and "While the City Sleeps” (1956, another story about a manhunt). He was often accused of sadism toward his actors; he had Lorre thrown down the stairs into the criminal lair a dozen times, and Peter Bogdanovich describes a scene in Lang's "Western Union” where Randolph Scott tries to burn the ropes off his bound wrists. John Ford, watching the movie, said, "Those are Randy's wrists, that is real rope, that is a real fire.”

For years "M” was available only in scratchy, dim prints. Even my earlier laserdisc is only marginally watchable. This new version, restored by the Munich Film Archive, is not only better to look at but easier to follow, since more of the German dialogue has been subtitled. (Lorre also recorded a soundtrack in English, which should be made available as an option on the eventual laserdisc and DVD versions.) Watching the new print of "M,” I found the film more powerful than I remembered, because I was not watching it through a haze of disintegration.

And what a haunting film it is. The film doesn't ask for sympathy for the killer Franz Becker, but it asks for understanding: As he says in his own defense, he cannot escape or control the evil compulsions that overtake him. Elsewhere in the film, an innocent old man, suspected of being the killer, is attacked by a mob that forms on the spot. Each of the mob members was presumably capable of telling right from wrong and controlling his actions (as Becker was not), and yet as a mob they moved with the same compulsion to kill. There is a message there somewhere. Not "somewhere,” really, but right up front, where it's a wonder it escaped the attention of the Nazi censors. 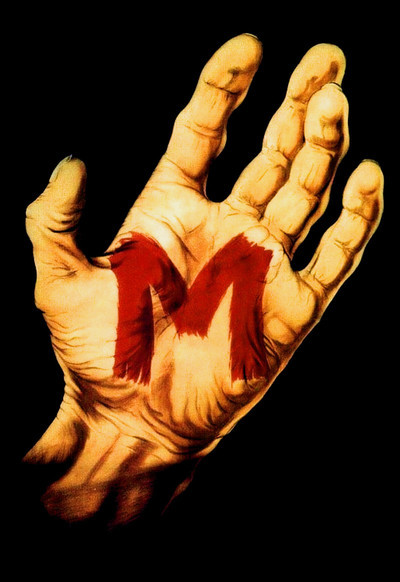