My father loved the Marx Brothers above all other comedians or, indeed, all other movie stars. The first movie he ever took me to was "A Day at the Races." All I remember about that experience was the fact of my father's laughter. But there was something else, too, that I understood only much later: The sound of his voice as he described the brothers. He used the tone that people employ when they are talking about how someone got away with something.

That is the same tone I have heard, and used, in discussing such subjects as "Some Like It Hot," "The Producers," "Blazing Saddles," "Airplane!," Monty Python, Andy Kaufman, Saturday Night Live, "South Park," Howard Stern, "There's Something About Mary" and "Being John Malkovich" - -and even movies that are only indirectly comedies, like "Pulp Fiction." There is a kind of admiration for material that dares something against the rules and yet is obvious, irresistibly, funny. How much more anarchic the Marx Brothers must have seemed in their time than we can understand today. They were among the first to evoke that tone; you can see who the Marx Brothers inspired, but not who they were inspired by, except indirectly by the rich traditions of music hall, vaudeville and Yiddish comedy that nurtured them.

Movies gave them a mass audience, and they were the instrument that translated what was once essentially a Jewish style of humor into the dominant note of American comedy. Although they were not taken as seriously, they were as surrealist as Dali, as shocking as Stravinsky, as verbally outrageous as Gertrude Stein, as alienated as Kafka. Because they worked the genres of slapstick and screwball, they did not get the same kind of attention, but their effect on the popular mind was probably more influential. "As an absurdist essay on politics and warfare," wrote the British critic Patrick McCray, " `Duck Soup' can stand alongside (or even above) the works of Beckett and Ionesco."

The Marx Brothers created a body of work in which individual films are like slices from the whole, but "Duck Soup" (1933) is probably the best. It represents a turning point in their movie work; it was their last film for Paramount, and the last in which all of the scenes directly involved the brothers. When it was a box office disappointment, they moved over to MGM, where production chief Irving Thalberg ordered their plots to find room for conventional romantic couples, as if audiences could only take so much Marx before they demanded the mediocre (Buster Keaton's sound comedies for MGM suffered from the same meddling and dilution).

"A Night at the Opera" (1935) their first MGM film, contains some of their best work, yes, but in watching it I fast-forward over the sappy interludes involving Kitty Carlisle and Allan Jones. In "Duck Soup" there are no sequences I can skip; the movie is funny from beginning to end.

To describe the plot would be an exercise in futility, since a Marx Brothers movie exists in moments, bits, sequences, business and dialogue, not in comprehensible stories. Very briefly, "Duck Soup" stars Groucho as Rufus T. Firefly, who becomes dictator of Fredonia under the sponsorship of the rich Mrs. Teasdale (Margaret Dumont, the brothers' tireless and irreplaceable foil). Neighboring Sylvania and its Ambassador Trintino (Louis Calhern) have designs on the country, and Trintino hires Harpo and Chico as spies. This flimsy premise provides a clothesline for one inspired sequence after another, including sustained examples of Groucho's puns and sneaky double entendres. But it also supports a couple of wordless physical sequences that probably have their roots in the vaudeville acts the brothers performed and saw years earlier.

One is the three-hat routine involving Chico and Harpo and the straight man Edgar Kennedy (who started with Mack Sennett and Chaplin). Chico, as a spy, inexplicably adopts the cover of a peanut vendor, and Harpo is a passerby. Kennedy has the lemonade cart next to Chico's peanut cart, and the brothers make his life miserable in a routine that involves their three hats changing position as quickly as the cards in a monte game.

The other sequence is one of the gems of the first century of film. Harpo disguises himself as Groucho, and for reasons much too complicated to explain, sneaks into Mrs. Teasdale's, tries to break into a safe and shatters a mirror. Groucho himself comes downstairs to investigate. Harpo is standing inside the frame of the broken mirror, and tries to avoid detection by pretending to be Groucho's reflection. This leads to a sustained pantomime involving flawless timing, as Groucho tries to catch the reflection in an error, and Harpo matches every move. Finally, in a perfect escalation of zaniness, Chico blunders into the frame, also dressed as Groucho.

It is impossible to discuss Groucho's dialogue without quoting it, and pointless to quote it since Groucho's delivery is essential to the effect. He played an utterly irreverent character whose speech was at the mercy of puns, insults and bawdy insinuations that tiptoed just this side of the censors (as when Rufus T. Firefly tantalizes Mrs. Teasdale with visions of marriage and then confesses, "All I can offer you is a Rufus over your head"). Many gifted comedy writers, including S.J. Perelman, labored over the Marx Brothers movie scripts, but all their dialogue had its origins in Groucho's own speaking style, perfected over the years.

In 1972 I was able to spend some time with Groucho, for a profile for Esquire. He was then 81, and still unmistakably occupying the persona he had made famous. (Who he was in private remains a mystery to me; in public he was always onstage.) His first words to me could have been said in more or less the same way by Rufus T. Firefly: "Esquire isn't my favorite magazine, you know. Interviews are really murder. They keep asking you questions. I could be brought up on a rape charge. I don't mind a hatchet job, if it's truthful.Couldyou pin a rape charge on me? Could you try? I'd appreciate it. You don't do any dental work, do you? I have to go to the dentist before I go to France."

In two sessions separated by a couple of weeks, I heard him talk for hours at a time, always in the same way, circling his material looking for loopholes. I began to think of him as a soloist, and speech as his instrument. Like a good musician, he no longer had to think of the notes; he worked in terms of timing and the through-line, and questions did not inspire answers but improvisations.

Groucho as a comedian would have been impossible in the silent era, just as Chaplin and Keaton adapted only uncertainly to sound. And yet in appearance the three essential brothers (Zeppo seemed superfluous) were like caricatures from the silent era. Harpo of course was always silent anyway. Chico had the Italian persona, with the curly hair and Pinocchio hat. And Groucho was such an artificial creation, with his bold slash of a greasepaint mustache, his eyebrows and his cigar. His look was so bizarre it wasn't makeup so much as a mask; there are times during the mirror sequence in "Duck Soup" when we have to ask ourselves which one is the real Groucho.

Dated as "Duck Soup" inevitably is in some respects, it has moments that seem startlingly modern, as when Groucho calls for help during the closing battle sequence, and the response is stock footage edited together out of newsreel shots of fire engines, elephants, motorcycles, you name it. There is an odd moment when Harpo shows Groucho a doghouse tattooed on his stomach, and in a special effect a real dog emerges and barks at him. The brothers broke the classical structure of movie comedy and glued it back again haphazardly, and nothing was ever the same.

Note: Why the title? The critic Tim Dirks explains: "It is claimed that Groucho provided the following recipe: `Take two turkeys, one goose, four cabbages, but no duck, and mix them together. After one taste, you'll duck soup the rest of your life.' "

Two Groucho Marx interviews are available on RogerEbert.com: One from1970, and another from1972. 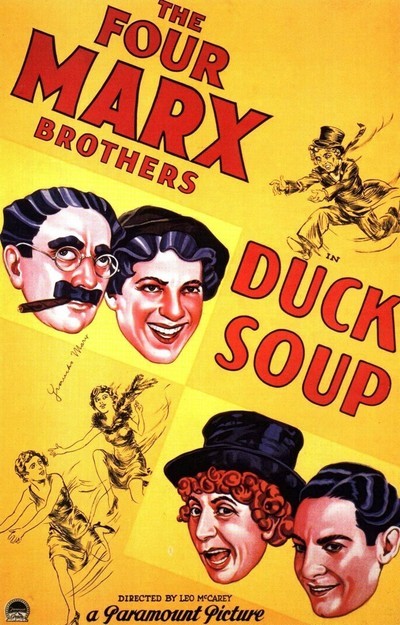