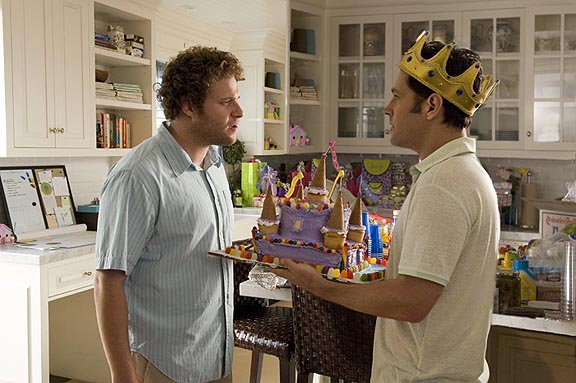 And the Exploding Head goes to... Seth Rogen and Paul Rudd in "Knocked Up"?

I'll publish my annotated "best of" list next week, but while thinking back over the year's movies I recalled some things that seemed to me "beyond category." Or the usual categories, anyway. One way or another, they made my head feel that it might explode. So, while everybody's preoccupied with all those other awards, here are the 2007 Exploding Heads for Achievement in Movies:

Best endings: • "The Sopranos" (final episode): blackout • "No Country for Old Men": "Then I woke up." • "I'm Not There": Dylan's harmonica on "Mr. Tambourine Man" • "Superbad": Baby-steps toward adulthood, separating at the mall escalator • "Zodiac": Stare-down

Most electrifying moment: A dog. A river. "No Country for Old Men."

Best performance by an inanimate object: (tie) The cloud (and its shadow), the candy wrapper, the blown lock housing in the motel room door, "No Country for Old Men"

Most cringe-worthy lines: • "My cooperation with the Nazis is only symbolic." -- "Youth Without Youth" • "That ain't no Etch-a-Sketch. This is one doodle that can't be undid, home skillet." -- "Juno" (the cutesy moment at the beginning when I nearly ran screaming for an exit; cutting this entire unnecessary scene would improve "Juno" immensely)

Funniest double-edged observation: "He's playing fetch... with my kids... he's treating my kids like they're dogs." -- Debbie (Leslie Mann) in "Knocked Up," watching Ben (Seth Rogen) play with her daughter, who is loving it. That's her point of view, and she's right, but she says it like it's a bad thing.

Ain't nothin' but the real thing, baby: Brian Dierker and Catherine Keener in "Into the Wild."

Best film about the way The Industry really works since "The Big Picture": Jake Kasdan's "The TV Set." The moment I knew it was going to be exceptional (sharp, precise and, therefore, extraordinarily funny) was when the writer's choice for the lead role gives an audition that's just... underwhelming. He isn't good. He isn't terrible. He just isn't enough. Which then allows the network execs to push for the "broader" alternative ("To me, the broad is the funny"). And even he proves himself capable of being not-awful -- in rehearsal, at least...

Best political film: (tie) "12:08 East of Bucharest" and "Persepolis" -- a pair of smart, funny movies about the effects of political revolutions on individuals in (respectively) Romania and Iran.

Game savers: J.K. Simmons and Allison Janney, who come to the rescue of "Juno" not a moment too soon

Most worthless critical label: "Independent." A movie should not be viewed through its budget, financing or distribution. And in these days of studio "dependents" (Miramax, Focus Features, Paramount Vantage, Fox Searchlight, etc.), the term "indie" is frequently misleading at the very least.

Best bureaucrat: Dr. Fischer (Alberta Watson), "Away From Her"

Best Supporting Crotch: Sacha Baron Cohen, "Sweeney Todd: The Demon Barber of Fleet Street." An squirm-inducing scene-stealer that makes you long for a change of angle: Please give us an above-the-waist shot! (Did they have spandex in mid-19th century London?)

Best dress: The green one, with Keira Knightley in it, "Atonement"

George W. Bush Award for Questionable Promotional Gimmick: From a press release: "It’s not the end of the world, but pandemonium may erupt as Warner Bros. takes to the streets of Seattle in support of the upcoming film I AM LEGEND, starring Will Smith! Movie fans will have an opportunity to prepare themselves for the end of the world as we know it when one lucky winner receives a special Survival Kit including a $250 gift card to Best Buy!" (That National Intelligence Estimate on Iran must've really put a damper on the marketing opportunities. Pretend it's World War III: Go shopping!)

Literalist Award for Most Relentlessly Unnecessary Verbal Over-Explanation of Every Single Plot Point and Thematic Statement: (tie) "Southland Tales" and "Youth Without Youth" (both of which made me momentarily question whether, in fact, their auteurs had ever made a movie that wasn't just a slide show with words)

Most belabored inappropriate metaphor: The milkshake, "There Will Be Blood." No, an oil well is not like a long straw that goes from one person's milkshake into another's. It's a straw that sucks up one big milkshake that both think they are sharing. The weird thing is that he gets the concept right earlier in the scene.

Scariest horror movie: (tie) "The Orphanage" and "Margot at the Wedding"

Worst gimmick: Shooting from the "POV" of a paralyzed stroke victim in Julian Schnabel's "The Diving Bell and the Butterfly." A literal conceit overused to absurdity ("Hey, was that a zoom, or did his eyeball just pop out?") for William Castle effects -- like sewing an eyelid shut so you can see the lid, the eyelashes, and the needle. All I could think of was the inside-Bill-Murray's-big-rubber-prop-mouth shot of dentist Steve Martin in "Little Shop of Horrors."

That's the whole movie in a nutshell: Jack Black, wallowing in narcissism along with the rest of the characters in "Margot at the Wedding," looks at himself in the mirror with his jockey shorts down: "My scrotum is longer than my penis." In a film that's all about characters watching themselves watching themselves, this is as close as anyone gets to self-discovery.

Least subtle score: Jonny Greenwood, "There Will Be Blood" (equally inseparable from the sound design)

Worst shot: (tie) "Southland Tales": Miranda Richardson leads her office staff in stretching exercises. Camera dollies in, she bends down to reveal a line of dwarves behind her. Ho-ho! "The Diving Bell and the Butterfly": After the paralyzed protagonist has a change of heart and imagines himself as a butterfly (rather than as a man trapped in a diving bell) he decides to write an autobiography and when his rehab therapist calls the editor... a butterfly lands on her desklamp. Got it.

Best dogs: (tie) The wounded one, the dead one, and the bounding torpedo one, "No Country for Old Men"

Best credits sequence: "Superbad" -- originally shot for the DVD menu, then incorporated into the movie.

Best boy: Dillon Freasier, "There Will Be Blood"

The Paul Rudd Moment of the Year: "I wish I liked anything as much as my kids like bubbles.... Their smiling faces just point out your inability to enjoy anything." -- depressed Pete (Paul Rudd), watching his kids in "Knocked Up"

Most repressed homoeroticism: The awkward, jealous relationships between the members of the James gang in "The Assassination of Jesse James by the Coward Robert Ford." I probably could have done without the line in the bathtub that spells it out, though: "Do you want to be like me, or do you want to be me?"

Sexiest non-sex scene: The climax of Eric Rohmer's "Romance of Astree and Celadon"

Worst movie song since "Evergreen": "Society" from "Into the Wild," written by Jerry Hannan and sung by Eddie Vedder: