Sarah Silverman is a genius (still)

So, please watch the above movie and then provide your interpretation of it, by considering my questions after the jump... 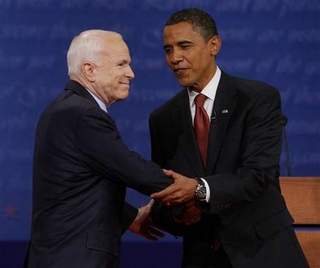 First, notice how Silverman's dismissive attitude toward the Young Black Man uncannily "pre-visioned" John McCain's rude conduct toward Barack Obama in the first presidential debate. (To be fair: Silverman looks at the YBM more times during the few seconds he's onscreen than McCain looked at Obama in 90 minutes.)

Few things are more fascinating to me than why people laugh at something, don't laugh at something, and/or think they should or should not laugh at something. And the humor of Silverman, Dave Chapelle, Judd Apatow and the "South Park" guys, to name a few, often addresses these issues directly. What I find especially intriguing are the conscious and unconscious reasons people have (or, perhaps, tell themselves they have) for laughing or not laughing -- as with the "full retard" gag in "Tropic Thunder."

Here are a few questions I'd like you to ask you to ask yourself -- and feel free to elaborate in comments if you feel so inclined. Forgive me if they seem obvious, but I'm interested in pinpointing your interpretations, and I've seen more than enough evidence in recent weeks (again: "Tropic Thunder," Sarah Palin, David Foster Wallace, Roger Ebert's Creationism piece, Kathleen Murphy's film criticism satire...) to convince me that you can never underestimate the sense of humor of the American public, but you can go broke anyway.

1) Why doesn't Silverman make eye contact with the Young Black Man and why is it funny? (Or not?)

2) Why is this one of the funniest lines ever: "They may seem totally different, but on paper... they're the same"? (You do not have the option of thinking it's not.) And what is the point of the comparisons between Jews and blacks?

3) Notice the cut after she introduces "Nana" and then the YBM. The comic timing is impeccable -- and it looks like something may have been trimmed. What do you think it may have been, and what's funny about taking it out?

4) Why is "It's beyond" one of the funniest things ever uttered by a human being?

5) What is the joke "circumsupersized" based upon?

6) Do you feel any differently about the film when you learn it was commissioned by the Jewish Council for Education and Research (and JewsVote.org)?

7) Are these trick questions?