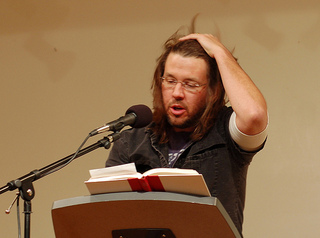 From a commencement address by the late David Foster Wallace at Kenyon University, May 21, 2005:

There are these two guys sitting together in a bar in the remote Alaskan wilderness. One of the guys is religious, the other is an atheist, and the two are arguing about the existence of God with that special intensity that comes after about the fourth beer. And the atheist says: "Look, it's not like I don't have actual reasons for not believing in God. It's not like I haven't ever experimented with the whole God and prayer thing. Just last month I got caught away from the camp in that terrible blizzard, and I was totally lost and I couldn't see a thing, and it was fifty below, and so I tried it: I fell to my knees in the snow and cried out 'Oh, God, if there is a God, I'm lost in this blizzard, and I'm gonna die if you don't help me.'" And now, in the bar, the religious guy looks at the atheist all puzzled. "Well then you must believe now," he says, "After all, here you are, alive." The atheist just rolls his eyes. "No, man, all that was was a couple Eskimos happened to come wandering by and showed me the way back to camp."

It's easy to run this story through kind of a standard liberal arts analysis: the exact same experience can mean two totally different things to two different people, given those people's two different belief templates and two different ways of constructing meaning from experience. Because we prize tolerance and diversity of belief, nowhere in our liberal arts analysis do we want to claim that one guy's interpretation is true and the other guy's is false or bad. Which is fine, except we also never end up talking about just where these individual templates and beliefs come from. Meaning, where they come from INSIDE the two guys. As if a person's most basic orientation toward the world, and the meaning of his experience were somehow just hard-wired, like height or shoe-size; or automatically absorbed from the culture, like language. As if how we construct meaning were not actually a matter of personal, intentional choice. Plus, there's the whole matter of arrogance. The nonreligious guy is so totally certain in his dismissal of the possibility that the passing Eskimos had anything to do with his prayer for help. True, there are plenty of religious people who seem arrogant and certain of their own interpretations, too. They're probably even more repulsive than atheists, at least to most of us. But religious dogmatists' problem is exactly the same as the story's unbeliever: blind certainty, a close-mindedness that amounts to an imprisonment so total that the prisoner doesn't even know he's locked up.

The point here is that I think this is one part of what teaching me how to think is really supposed to mean. To be just a little less arrogant. To have just a little critical awareness about myself and my certainties. Because a huge percentage of the stuff that I tend to be automatically certain of is, it turns out, totally wrong and deluded. I have learned this the hard way, as I predict you graduates will, too. [...]

Twenty years after my own graduation, I have come gradually to understand that the liberal arts cliché about teaching you how to think is actually shorthand for a much deeper, more serious idea: learning how to think really means learning how to exercise some control over how and what you think. It means being conscious and aware enough to choose what you pay attention to and to choose how you construct meaning from experience. Because if you cannot exercise this kind of choice in adult life, you will be totally hosed. Think of the old cliché about quote the mind being an excellent servant but a terrible master.

This, like many clichés, so lame and unexciting on the surface, actually expresses a great and terrible truth. It is not the least bit coincidental that adults who commit suicide with firearms almost always shoot themselves in: the head. They shoot the terrible master. And the truth is that most of these suicides are actually dead long before they pull the trigger.

And I submit that this is what the real, no bullshit value of your liberal arts education is supposed to be about: how to keep from going through your comfortable, prosperous, respectable adult life dead, unconscious, a slave to your head and to your natural default setting of being uniquely, completely, imperially alone day in and day out. That may sound like hyperbole, or abstract nonsense. Let's get concrete. The plain fact is that you graduating seniors do not yet have any clue what "day in day out" really means. There happen to be whole, large parts of adult American life that nobody talks about in commencement speeches. One such part involves boredom, routine, and petty frustration. The parents and older folks here will know all too well what I'm talking about. [...]

The only thing that's capital-T True is that you get to decide how you're gonna try to see it.