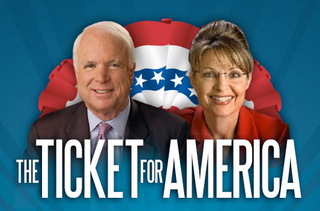 I had just begun working on a piece about how comedy is the the only adequate response to the modern world, and the most profound approach to exploring and understanding the modern human psyche... when this happened. The folly and tragedy of human existence, and the indifferent and inhospitable relationship of the universe to human needs and desires, can be plumbed only by the sharpest and most penetrating comedy, without which tragedy loses its meaning and its deepest pain. And sometimes it just happens without comedy writers needing to make anything up. Or is it the other way around? Miss Congeniality. Elle Woods. Tracy Flick. Could this be an example of life imitating comedy?

This chick flick, naturally, features a wild stroke of fate, when the two-year governor of an oversized igloo becomes commander in chief after the president-elect chokes on a pretzel on day one.

The movie ends with the former beauty queen shaking out her pinned-up hair, taking off her glasses, slipping on ruby red peep-toe platform heels that reveal a pink French-style pedicure, and facing down Vladimir Putin in an island in the Bering Strait. Putting away her breast pump, she points her rifle and informs him frostily that she has some expertise in Russia because it's close to Alaska. "Back off, Commie dude," she says. "I'm a much better shot than Cheney."

[UPDATE: Now comes news from the McCain-Palin campaign that there's an unmarried, pregnant 17-year-old daughter in the pro-family Palin household. You can't make this stuff up. Reuters reports that the minor is "about five months pregnant and is going to keep the child and marry the father, according to aides of Republican presidential candidate John McCain." Damn right she will. It's written into the GOP platform!]

Quite often, the behavior of public figures displays a cosmic humor beyond anything a comedy writer could actually have gotten away with. In this case, the joke would seem too crass and cynical if it weren't for real. Now its crassness and cynicism give the humor real bite. A week ago if some film or television writer had proposed this preposterous scenario (old politician chooses Alaskan creationist former small-town mayor and beauty contest winner as running mate), it would have just seemed mean and a little desperate. Now? Well, see "Ham Sandwich McCain's Actual Choice for Veep." It no longer seems so far-fetched.

Now you have to wonder: Why didn't he choose someone more qualified? Like Harriet Miers?

When it comes to experience, Dan Quayle was the natural choice -- but his Y chromosome made him ineligible in the all-important tokenism category. (Brownie could bring his hurricane ineptitude to the table, but he's still sporting a scrotum so that won't play.) The main attribute McCain's running mate needed was that she be able to play up her sisterhood with Senator Hillary Clinton, the veteran politician so long beloved and revered by the Republican Party. That and she had to have spunk. The convention is in Minneapolis, and she's gonna make it after all.

Once comedy of this magnitude has occurred, and satire has been rendered superfluous, the really brilliant comedians have only to recognize the situation for what it is. I'm tremendously grateful, then, that Jon Stewart, with his unerring eye for future casting opportunities, and Samantha Bee, with her sharp-as-a-tack "lady brain," found exactly the right words to summarize the genius behind this unprecedented decision. 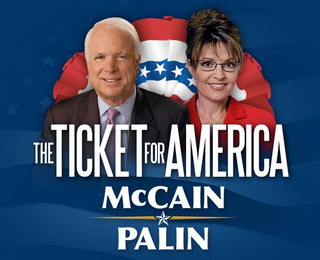 Thanks to Daily Kos for this transcript of Samantha Bee's segment, after which nothing more needs to be said about this choice:

Jon: Senior Female and Women's Issues Correspondent Samantha Bee joins us now with more. Obviously, I know how moved you were by Senator Hillary Clinton's run for the presidency. How are you feeling now about this extraordinary moment?

Samantha: It's amazing, Jon. As a proud Vagina American myself, I can tell you I'll be voting for McCain in November.

Jon: Right. But in many ways Governor Palin is the ideological opposite of Senator Clinton.

Samantha: Oh yes, but she's her gynecological twin. You see the thing is. Let me explain. They both have vaginas ...

Samantha: Boobies (making circular gestures around her chest). They both have boobies.

Jon: But both Palin and McCain believe that Roe v. Wade should be overturned.

Samantha: Ow, ow, ow. Can you just stop overloading my lady brain? Ow. John McCain chose a woman who is almost completely unprepared for the job and who disagrees with me on every core value I believe in, but I will be voting McCain in November because he understands. Women don't vote with the big head (pointing to her head). They vote with the little hood (pointing downward). Am I right ladies? You're with me!